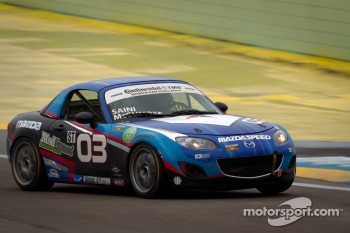 Dean pulled away from the standing start with the No. 16 Projections Research/Sick Sideways MX-5 with a gaggle of CJ Wilson Racing teammates in his mirrors. The Sebring, Fla. native outlasted championship leader Stevan McAleer, Elliott Skeer and Marc Miller to grab a 1.433-second win, his third of the season.

Despite the final margin of victory, Dean spent the race with McAleer’s No. 28 Blue Mercury Capital/Numerix/CJ Wilson Children’s Charities MX-5 filling his mirrors. McAleer turned the fastest lap of the race in 1:37.038 (91.226 mph), but didn’t have enough for Dean this weekend.

“The way the points lie right now, this weekend was the turning point in the season, I think,” Dean said. “We had a lot of points to pick up, and we’re chipping away at it. The car was great all weekend. Before the race, I thought McAleer was going to be able to make a few moves on me, and I don’t think he ever really made a move that was going to work and I was driving defensively.

“It was an unbelievable amount of pressure. He drove a great race, he looked tidy the entire time, put the pressure on me, and I was happy to see the checker when it was.”

As the point leader in Round Seven of 11, McAleer was mentally balancing the racer’s urge to make an aggressive pass for the win, and the value of Championship points.

With the pair fighting on lap 24, Dean slipped past a lapped car going into turn five and left McAleer to follow the slower car through the corners. The move gave Dean just a bit of breathing room for the remaining laps. A second place finish to Dean stretched McAleer’s lead from 19 entering the weekend to 26 leaving it.

“It was super important to keep the car in one piece,” McAleer said. “I was trying as hard as I could for at least the first three quarters out there, and then I just kind of toned it down toward the end so I didn’t throw the car off. It’s a super result for the team, and overall a good lead for us. We got the championship lead by a few more points, but the fight is still on.”

“It’s great to be back up here. I miss this place, that’s for sure. It was a good race. We were fast all weekend, but just a few tenths off the other boys. I think this is the most reasonable spot we could have finished, I’m happy with the performance.

“It was a great job by the whole team, I really have to thank them all. They did an awesome job with the car and made it as great as they could.”

The battle for fifth place ended with 16-year-old Sebastian Landy’s No. 07 Excitations.com MX-5 claiming the spot in front of Ara Malkhassian (No. 11 ALARA Racing MX-5) and Nathanial Sparks (No. 3 OOTSK Performance MX-5). The three ran nose to tail for most of the race, with all three taking their turn in the position through the race.

The battle culminated with a three-wide battle through turn eight on the final lap, with contact between at least Landy and Malkhassian as each driver jockeyed for position. Malkhassian crossed in sixth, with Sparks finishing seventh.

Chris Windsor (No. 38 Windsor Customs/Child Print ID MX-5) and Forrest Landy – the 17-year-old brother of Sebastian – finished eighth and ninth in the debut for all three drivers and the team.

Emilee Tominovich’s No. 19 TrueCar MX-5 carried the fourth teenager in the top-10 with the 19-year-old’s best career finish.

The effort of the race came from Christian Szymczak, who broke two ribs in a Friday practice accident. The accident totaled his No. 34 Projections Research/Sick Sideways MX-5 and forced Szymczak to miss Saturday’s qualifying. Szymczak started the race from the rear of the field in the No. 12 machine prepared by ALARA Racing, and Szymczak climbed to fifth place by lap nine. An unfortunate mechanical failure ended his day on lap 11 and relegated him to a 13th place finish.

The race broadcast of Round Seven from Canadian Tire Motorsport Park will air Saturday, August 18 at Noon on Velocity