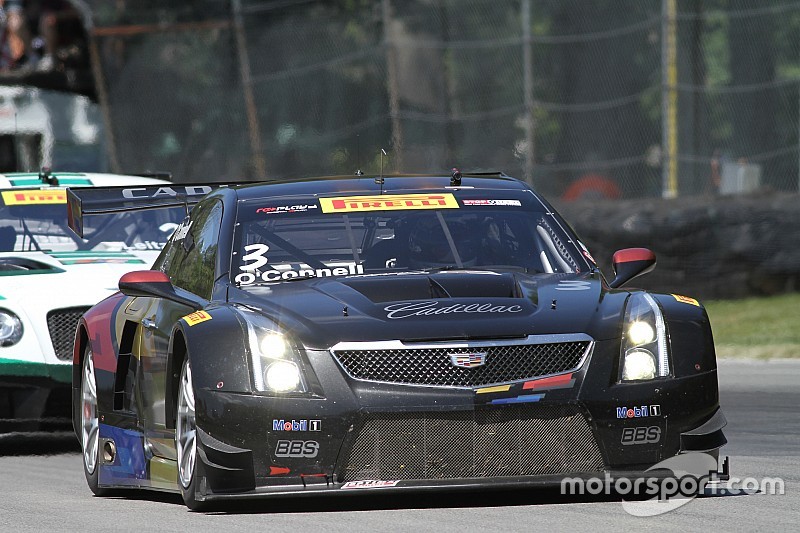 Salinas, Calif. – Over 100 drivers across all seven Pirelli World Challenge classes are set to race at Mazda Raceway Laguna Seca, September 11-13 at the Grand Prix of Monterey presented by Cadillac. The series closes out its 2015 season with GT/GTA drivers competing in Round 20, while GT Cup drivers will compete in Round 18. Drivers in the GTS class will race Round 17, while TC, TCA and TCB drivers will race in Rounds 16, 17, and 18.

The Pirelli World Challenge series makes its first appearance at Mazda Raceway Laguna Seca since 2012. PWC first raced at the Northern California track in the series' inaugural 1990 season. With 2015 being the inaugural season for GT Cup, this is the first time the class will compete at MRLS. GTA, TCA and TCB classes will also make their debut appearances at MRLS this coming weekend.

O'Connell and Beretta Set for Showdown for GT Drivers' Championship

Defending 2014 champion Johnny O'Connell, of Flowery Branch, Ga., comes into the weekend leading in drivers' championship points with 1625. He looks to win his fourth straight series GT drivers' championship and will pilot the No. 3 Cadillac Racing Cadillac ATS-V.R. O'Connell's teammate, Andy Pilgrim, of Boca Raton, Fla., in the No. 8 Cadillac Racing Cadillac ATS-V.R, has had a hard luck 2015 season and sits 13th overall in GT.

After leading the GT Drivers' Championship for much of the season, Olivier Beretta, of Monte Carlo, Monaco in the No. 61 Ferrari of Ontario/Toronto/Alberta Ferrari 458 GT3 Italia, comes into the weekend second in points with 1599, only 26 points behind O'Connell after closing the gap slightly at Sonoma. Beretta has won three races this season and he makes his second PWC series start at MRLS.

JD Davison, of St. Petersburg, Fla., in the No. 33 AE/Replay XD Nissan GT-R NISMO GT3 sits third overall in the GT Championship coming into MRLS with 1490 points and has a mathematical chance to win the title if both O'Connell and Beretta falter. Davison makes his first career Pirelli World Challenge start at MRLS. Davison's teammate Bryan Heitkotter, of Fresno, Calif., will pilot the No. 05 Nissan GT Academy GT-R AE Replay XD Nissan GT-R GT3. Heitkotter was promoted to GT from GTA after finishing third overall in Round 15 at Mid-Ohio.

Ryan Dalziel, comes into the weekend 4th in points with 1484 and also has a mathematical chance to win, but like Davison, he will need O'Connell and Beretta to falter. He with pilot the No. 31 EFFORT Racing/World PMO Porsche 911 GT3 R. Teammate Michael Lewis, of Laguna Beach, Calif., was promoted from the GTA class to GT at Barber and sits 9th overall in the standings. Lewis will drive the No. 41 EFFORT Racing/Curb-Agajanian Porsche 911 GT3 R. Dalziel and Lewis also look to solidify the GT Manufacturers' Championship for Porsche.

Kevin Estre, of Lochau, Austria, in the No. 9 K-PAX Racing with Flying Lizard Motorsports McLaren 650S GT3, enters the weekend 5th in the drivers' standings with 1375 points. Estre won Round 18 at Sonoma and looks to play the spoiler role at MRLS. Teammate Robert Thorne, of Littleton, Colo. will pilot the No. 6 K-PAX Racing McLaren 650S GT3. Thorne finished second to his teammate Estre in Round 7 at Barber (Thorne's best result thus far of the season).

Bentley Team Dyson Racing heads into the weekend with Guy Smith, of Beverley, England, piloting the No. 20 Bentley/Breitling/Mobil 1 Bentley Continental GT3 and Chris Dyson, of Pleasant Valley, N.Y. behind the wheel of the No. 16 Bentley/Breitling/Mobil 1 Bentley Continental GT3. Smith replaces Butch Leitzinger in the seat of the No. 20 machine. Smith makes his first career PWC start at MRLS, while Dyson sits 8th in the championship and won earlier this year at Road America.

Mike Skeen, of Charlotte, N.C., piloting the No. 2 DeVilbiss/Hawk Performance Audi R8 LMS ultra, enters the weekend 6th in the championship. Skeen looks to close out the season strongly looking for his first win of 2015 at MRLS.

Ryan Eversley, of Atlanta, Ga. in the No. 43 RealTime/Acura Motorsports/HPD Acura TLX-GT enters the weekend 7th in points. Eversley has one win on the season (St. Petersburg) and makes his first career Pirelli World Challenge start at MRLS. Eversley's teammate Peter Cunningham, of Milwaukee, Wis. in the No. 42 RealTime/Acura Motorsports/HPD Acura TLX-GT holds almost every statistical series record and sits 14th in the championship. Cunningham makes his 14th career series start at MRLS – of the over 100 drivers entered for the races this weekend, he has the most series wins at the track with four.

The 17-driver GT field is rounded out by series veteran James Sofronas, of Pound Ridge, N.Y., in the No. 14 GMG Audi R8 LMS ultra GMG Racing/Spyder/Mobil 1, Duncan Ende, of Los Angeles, Calif. in the No. 64 Merchant Services Ltd./Linospresso USA Ferrari 458 Italia GT3, and Nicky Catsburg, of Kirchanschoring, Germany in the No. 25 Blancpain Racing Lamborghini Gallardo GT3 REX. Ende has experience at MRLS having raced at the track in another sports car racing series, while Sofronas has 13 career PWC starts at MRLS. Catsburg makes his first career start at MRLS.

Frankie Montecalvo, of Highlands, N.J. holds a commanding lead in the GTA Drivers' Championship after scoring his 7th win of the season at Sonoma. Since Road America, Montecalvo has been on a roll scoring six wins. He will pilot the No. 66 Bayshore Racing DragonSpeed Mercedes-Benz SLS AMG GT3.

After leading the GTA Drivers' Championship for most of the season, Henrique Cisneros, of Miami, Fla. in the No. 30 MOMO NGT Motorsport Ferrari 458 Italia GT3 enters the MRLS weekend 2nd in points with 1767, 195 points behind Montecalvo. Cisneros makes his first series start at the track. Cisneros' brother Eduardo, of Miami, Fla. is also entered in GTA for MRLS piloting the No. 29 MOMO NGT Motorsport Ferrari 458 GT3 Italia.

Martin Fuentes, of Mexico City, Mexico in the No. 07 Scuderia Corsa Ferrari 458 Italia GT3 comes into the weekend third in class points with 1,559. Fuentes won the Round 6 race at Barber.

Drew Regitz, of Denver, Colo. will be in the No. 19 iracercoaching.com Audi R8 LMS ultra. Regitz sits 10th.

Thompson Looks to Close Out Dominating Season with Win at MRLS

Colin Thompson, of Doylestown, Pa. continued his domination of the GT Cup class with his 12th win of the season in Round 17 at Sonoma. Thompson will pilot the No. 11 Porsche of Bucks County/Penn Valley Constructors/Sherwin Williams Automotive Finishes/Austin Hatcher Foundation Kelly-Moss Motorsports Porsche 911 GT3 Cup. Thompson leads the class with 2160 points.

Cooper Versus Aquilante for the Championship

With a win in Round 16, Michael Cooper, of Syosset, N.Y., in the No. 10 Blackdog Speedshop Chevrolet Camaro Z28, increased his lead in first place in the GTS Drivers' Championship and sits at 1475 points coming into the weekend. It was Cooper's fourth win of the season after winning at Circuit of the Americas, Mid-Ohio Sports Car Course, and Miller Motorsports Park. Cooper's teammate, series veteran Tony Gaples, of Libertyville, Ill., will pilot the No. 11 Blackdog Speedshop Chevrolet Camaro Z28.

Andrew Aquilante, of Chester Springs, Pa., enters the MRLS weekend 107 points behind Cooper in the GTS Drivers' Championship. He will pilot the No. 32 Calvert Dynamics Phoenix American Motorsports Ford Mustang Boss 302. Aquilante's teammate Kurt Rezzetano, of Phoenixville, Pa., in the No. 37 Calvert Dynamics/Phoenix American Motorsports Ford Mustang Boss 302 comes into Sonoma fifth in GTS Drivers' points. Aquilante and Rezzetano, along with the other drivers in class piloting the Boss 302, look to further solidify the GTS Manufacturers' Championship for Ford.

With three races scheduled at MRLS and a maximum total of 456 points up for grabs, there are a number of contenders still in the hunt for the TC title. Columbus, Ohio's Corey Fergus, in the No. 00 USLED/Axis Roofing/AERO/RSS/Motul Motorsports Promotions Porsche Cayman enters the weekend leading the TC Drivers' Championship with 1342 points. He leads Ernie Francis Jr. of Davie, Fla., piloting the No. 98 Breathless Performance/Time4Learning Breathless Racing Mazda MX-5 by only 47 points. Francis Jr. enters the weekend with 1295 points. Francis Jr., along with the other drivers piloting MX-5's look to help solidify the TC Manufacturers' Championship for Mazda this weekend.

Schwartz Versus Nixon for the Championship

Johan Schwartz, of Huntersville, N.C., had a successful Miller weekend recording his 9th win of 2015. Coming into the finale weekend of the season, he leads the TCB class drivers' championship with 1860 points and will pilot the No. 25 Tech Sport Racing / Zero Cancer Chevy Sonic.