Kunimitsu is behind other Honda teams - Yamamoto

Former champion Yamamoto has shared the Kunimitsu NSX-GT with Jenson Button for the past two seasons, but has been paired with Tadasuke Makino for 2020 - which marks the first season for Honda's revised front-engined car.

In the first test of the pre-season at Okayama, Yamamoto set the fourth-fastest time on the first day, just under four tenths slower than pacesetter Bertrand Baguette, and sixth overall.

But the deficit to both the Real Racing and ARTA Hondas - the only other Bridgestone-shod NSXs - left the 31-year-old feeling concerned for his team's prospects.

"We had trouble in the previous manufacturers’ test at Okayama, so we had to change some things," Yamamoto told Motorsport.com. "So the official test was a chance to restart.

"I can’t deny that we are a little behind. The balance was not good at all, and the top two cars [on Saturday, the Real Racing and ARTA Hondas] have the potential to go faster, so we have to improve the performance.

"Things haven’t been going smoothly. I haven’t been able to find a way to be able to drive fast yet, so I want to find it quickly."

ARTA ended up with the third-best time of the test after Nirei Fukuzumi was second-fastest on the first day, falling 0.297 seconds shy of Baguette's benchmark.

That left Fukuzumi and teammate Tomoki Nojiri third-fastest overall, but Nojiri was reluctant to read much into the times, suspecting his rivals of sandbagging.

"I want to say that everybody is taking it seriously, but testing is like that," Nojiri told Motorsport.com. "We don’t know what everybody else is doing.

"There are also areas we need to fix, but as for the balance generally, I was able to run without anything strange happening. It’s going well, so I feel like we can improve things step-by-step.

"Of course there are things we want to improve. More or less we can see the weaknesses of the NSX. We need to think about how we can improve on those." 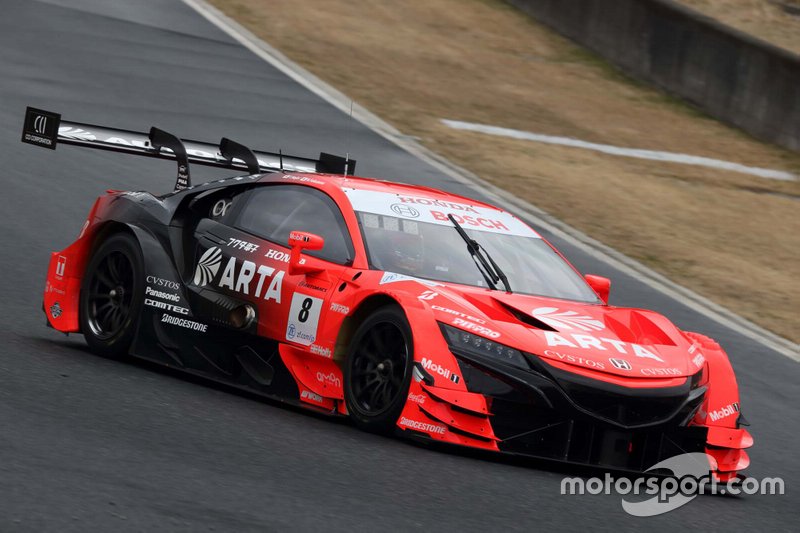 While happy with the performance of the ARTA NSX, Nojiri admitted the cool weather conditions at Okayama may have served to flatter Honda's performance.

"In the past, the NSX performed well when it was cold, but because we didn’t score many points in the summer races, this is something we are worried about with this year’s car," said Nojiri.

"I don’t know if the weather will change before this year’s season starts, but for now we have had a good test."