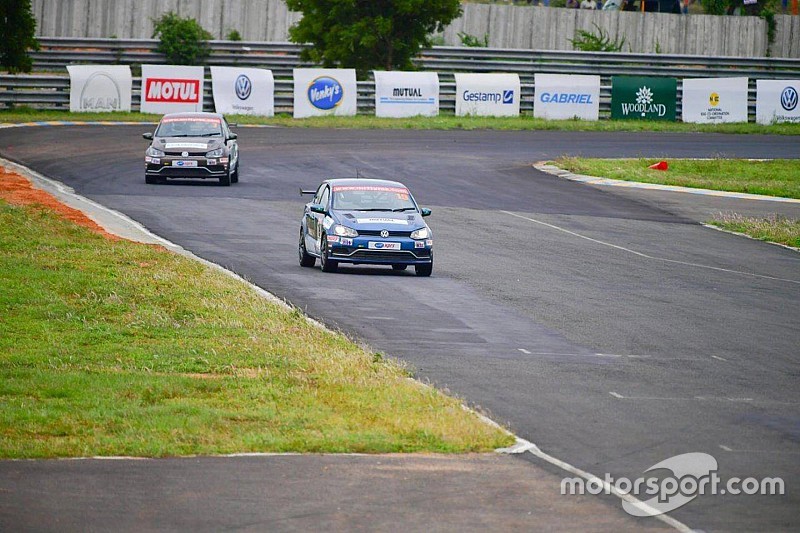 Mohite was relatively slow off the line compared to fellow front row starter Jeet Jhabakh, who took advantage of the situation to take the lead into turn 1.

However, Mohite never let Jhabakh pull away, continuously piling pressure in the next couple of laps. On lap 4, he dived down the inside of the Hyderabad-based racer at turn 1 and made the move stick to retake the lead.

Once back in front, he immediately set the fastest lap of the race to build a one-second buffer and dissipate any threat of a counter attack.

He eventually won the race by a comfortable margin of 4.229s, despite losing time while lapping a rival car.

Saurav Bandyopadhyay initially slipped behind Pratik Pandurang Sonawane, but managed to find a way past to complete the podium spots.

Affan Sadat Safwan Islam finished another second adrift of Sonawane in fifth, while Shubhomoy Ball was classified nearly 15 seconds behind in sixth.

The opening race of the season saw several incidents, with Anmon Singh Sahil spinning on the first lap and Manoj Yanamadala running wide during the closing stages of the 15-lap meeting.

Mohite doubles up in red-flagged Race 2

Female racer Shivani led the field at the start of Race 2 and even managed to build out a small advantage for herself.

However, as laps wore on, Mohite managed to cut into her lead and when Shivani ran wide at turn 1 on the fifth tour, the Kolhapur-based racer was able to sneak ahead.

Meanwhile, Bandyopadhyay was starting his own charge behind the leading runners and managed to overtake Shivani and Safwan Islam in quick succession to move into second.

Soon after the race was red-flagged as Yanamadala’s Ameo flipped over in an incident not caught by TV cameras.

After a fairly lengthy interruption to clear the car, the race was resumed for seven laps with Mohite perfecting the restart and holding onto the advantage to add up to his Saturday’s win.

Safwan Islam finished second after jumping Bandyopadhyay at the restart, the two drivers separated by just 0.116s at tge flag.

Tuhid Anwar was classified fourth ahead of Jhabakh, who recovered from a lap 1 spin to complete the top-five positions.

Shivani, who looked set for a podium finish till the mid-point of the race, dropped out of contention with a technical problem and was eventually classified ninth.