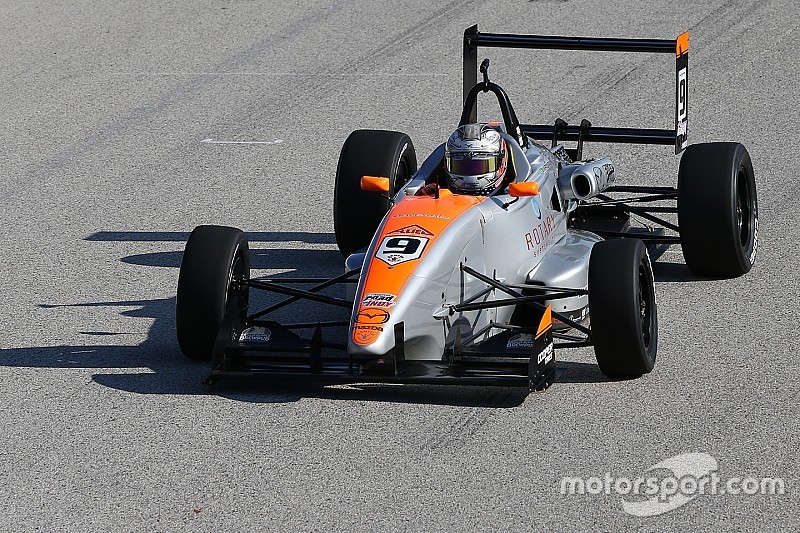 Victor Franzoni took his first victory of the USF2000 season, with a dominant drive in which he held off the Cape Motorsports pair who had won the previous seven races in the championship.

After grabbing the lead from polesitter Anthony Martin at Turn 3 on the opening lap, the ArmsUp Motorsports ace made no mistake in defending the lead, hugging the inside down to Turn 3 every time he needed to, forcing the Cape Motorsports with Wayne Taylor Racing driver’s to attempt to pass around the outside.

This pair pulled out a five-second lead over the chasing pack until a backmarker spun at Turn 1 on Lap 7, bringing out the full-course caution.

At the restart, that allowed Cape Motorsport’s other driver, Canada’s Parker Thompson to join the lead battle. He had surrendered third to Pabst Racing’s Jordan Lloyd at the start of the event, but repassed the Australian at Turn 3 at the restart, and Thompson found a new lease of life and speed, harrying teammate and championship rival Martin who was also still trying to wrest the lead from Franzoni.

Martin appeared to make a mistake, and skittered into the Turn 8 tires on lap 13, bringing out another full-course yellow, and on the restart, Franzoni simply pulled out half a second a lap to win by 2.2sec.  Thompson made a hopeless restart by contrast, and allowed Lloyd back through for second, with Thompson relatively content to settle for third on a day when his teammate went out.

Luke Gabin was fourth for Jay Motorsports, after a solid drive, while Robert Megennis put on his usual charge from the back, starting 18th and finishing fifth for Team Pelfrey.

Yufeng Luo was sixth for Pabst Racing, with Dakota Dickerson seventh in the Afterburner Autosport machine, and Cameron Das eighth in a second Jay Motorsports car.

One other driver who should have been contending for a top-five position was Nikita Lastochkin who suffered a mechanical issue in his Cape car.