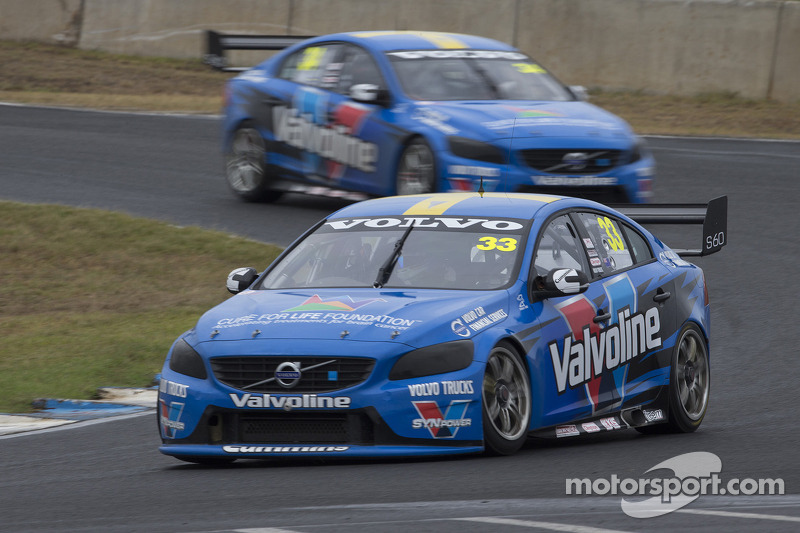 Whincup took ARMOR ALL Pole Position for race one from Mark Winterbottom and Lowndes, while Lowndes returned the favour in the second session with McLaughlin second and Whincup third.

Six months ago few would have dared to suggest a Volvo would be wedged between the mighty Red Bull Racing Australia Holdens of Jamie Whincup and Craig Lowndes.

But today it became a reality with young Kiwi star Scott McLaughlin planting himself between the two in qualifying for tomorrow's season opening blockbuster the Clipsal 500 Adelaide.

Two qualifying sessions set the grid for the two 125km races tomorrow afternoon as part of a revised Saturday format at the event.

Whincup took ARMOR ALL Pole Position for race one from Mark Winterbottom and Lowndes, while Lowndes returned the favour in the second session with McLaughlin second and Whincup third.

There were no hats on the back windscreen, no slow driving in the right lane and no grey haired nomads behind the wheel when McLaughlin rammed the S60 on the front of the grid to start beside Lowndes in race two.

"I reckon I've heard every single one," said McLaughlin of the hundreds of Volvo jokes he has heard since they Swedish brand returned to V8 Supercars.

"We honestly thought a top 10, a top 15 would be great but to come out with a top three and a top five is amazing and is a massive credit to my boys.

"They (the team) had to build two cars, work with new body kits and everything so this is dedicated to everyone at GRM and everyone back at the workshop."

McLaughlin said the fear was being expected to start slowly, but that certainly didn't happen today.

"The car is awesome but at the end of the day people are going to compare," he said.

"I'm not going to say anything but the new guys perhaps didn't go the best last year and we have sort of come out and gone pretty good. No disrespect to them but I think our boys have worked hard.

"We've been able to work with our car of last year and keep all that knowledge. All we had to develop was the aero package and the engine and the boys have done a fantastic job.

"I have (just) put all their work to good measure and it's making me look pretty cool."

Colourful Team boss Garry Rogers said it was just reward for his outfit.

"These guys deserve such credit. It's been an exciting project as well... Polestar in Sweden have done a ripping job with the engines. A lot of credit has to go to a lot of people, but I'm thrilled to bits."

As Volvo starred there were in fact all five manufacturers in the top seven in the qualifying session makes for an incredible start to the season.

While McLaughlin may have been the surprise packet he fought with Michael Caruso's Norton Hornets Nissan and Lee Holdsworth's Erebus Motorsport V8 Mercedes AMG for the front row in the closing seconds of the session.

The Jack Daniel's Nissans of Todd Kelly and Rick Kelly were also quick all day.

"There's definitely no doubt that GRM had a great car last year and it just has a new body on it this year and that's the beauty of car of the future it allows other manufacturers to come in," said Lowndes who won last year's opening race in Adelaide.

"GRM were always going to build a good strong car - Garry always does. It's fantastic to see that, to watch the Nissan's go through practice looking a lot stronger and it was the same with Lee (Holdsworth).

Whincup said he was looking for more in tomorrow's two races but happy to be on the front and second rows of the grid.

"We were pushing hard. It's great to be back in the cars, it's been while since we have had that rush banging a car around the track as fast as you can on new tyres," he said.

"We didn't quite get it right. We got lucky in the first one but third is our true speed in the second so we have some work to do."

Winterbottom had a similar sentiment.

"We aren't quite there, you are driving it quite hard like everyone is but just on the breaks it's a little bit unsure at the moment and at this place it is not pretty as the walls are not far away on the exits," he said.

"This year in particular there are a lot of good cars so if you get it wrong you are going to be easily out of the ten and that's good for the sport.

"It (the Volvo S60) was going to be quick. Its' got good aero numbers, a good engine and a good driver and was always going to look like a pretty good package. They have won races last year and have just changed their brand."

Tomorrow kicks off with the weekend's final practice session, ahead of race one at 4.20pm local time, and race two at 6.50pm.

Pace to find for Coulthard at Adelaide