INDIANAPOLIS, Monday, July 5, 2004 -- Rodger Ward, one of the greatest drivers in Indianapolis 500-Mile Race history, died July 5 in Anaheim, Calif. He was 83. Rodger Ward. Photo by IMS LLC. Ward won the race twice and during a six-year ... 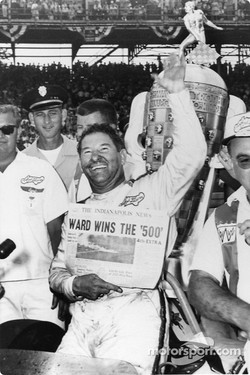 Rodger Ward.
Photo by IMS LLC.
Ward won the race twice and during a six-year stretch between 1959 and 1964 never finished worse than fourth during that span. His victories came in 1959 and 1962, and he was the last surviving winner from the 1950s.

"Indy makes the race driver," Ward said in a 1999 interview. "You become famous when you come (to the Indianapolis Motor Speedway). I don't care where else you race in the world.

"I was pretty famous in my own territory, but when I came to Indianapolis, and the first time I ran here, I wasn't known as a driver from California. I was an Indy driver."

Earlier this year, Ward said, "Winning that race was the greatest thing that happened to me in my life."

Ward first qualified for the 500 in 1951, but his fame gained stature when he hooked up with car owner Bob Wilke and builder/mechanic A.J. Watson to form the fearsome Leader Car Racing team. The trio was known as "the Flying W's." During their time at the top, Ward's finishes at Indy were first, second, third, first, fourth and second, respectively, from 1959-64.

To the end, Ward thought he should have won both the famed duel with Jim Rathmann in 1960 and his battle with A.J. Foyt in 1964. He blamed the loss to Rathmann on his own stupidity for stalling the car in the pits while leading and the defeat by Foyt to a "dumb driver" and a crew that didn't recognize what was causing his engine to burn its fuel too quickly.

"But I made Foyt famous, so what the hell," he said, shrugging the loss off in later life. 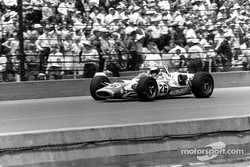 Rodger Ward.
Photo by IMS LLC.
Ward was born Jan. 10, 1921, in Beloit, Kan., but his father moved the family to Los Angeles when he was young. Ward began showing interest in cars when at 14 he built a Ford hot rod with parts recovered from his father's wrecking and junkyard business. He quit school after his junior year and did a lot of "night" drag racing.

Then came World War II. Ward joined the Air Force and became a P-38 fighter pilot and even flew B-17 bombers. His flying skills were so good he was retained as an instructor in instrument flying.

Stationed at an air base at Wichita Falls, Texas, Ward talked his way into a job taking care of Ford-engined midgets for drivers racing at a local quarter-mile track. He made his racing debut when a driver didn't show one night.

After his discharge from the service, he returned to Southern California and began racing midgets with a modicum of success. But by 1948, his aggressive driving style had brought some top-five finishes, and then he began winning. One of his proudest moments came when at Gilmore Stadium in 1950 he took a Ford-powered midget and beat all the drivers in the more powerful Offy cars.

He turned to stock cars in 1951 and won the AAA championship. He also passed his rookie test and qualified for his first Indianapolis 500 that year, finishing 27th. Again, he showed nothing special early in his career at Indy as an eighth place in 1956 was his only top-10 finish in his first eight starts.

Ward seriously considered quitting racing after the 1955 Indianapolis 500. He was a close friend with Bill Vukovich, who won the race in 1953-54. Vukovich was leading in 1955 when the front axle on Ward's car snapped, and in the ensuing melee Vukovich's car hit Ward's and catapulted over the wall. Vukovich was killed.

"I don't know that I could really explain to you how badly I felt," Ward said. "To me, it was an absolute disaster."

He attended Vukovich's funeral in Fresno, Calif. Vukovich's brothers assured him it was not his fault and that he should continue his racing career. 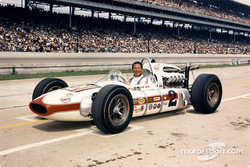 One more call, and this time Ward got an interview and the job.

"I got to tell you, it worked out pretty damn good," Ward said.

Ward was in demand after winning Indy in 1959. He ran a sports car race with a midget later in 1959 and beat all the road-course drivers. He took a midget to Sebring in December to compete in the first United States Grand Prix. He ran eighth for a while, but a clutch problem took him out. Ward also drove a BRM Formula One car in the 1963 United States Grand Prix at Watkins Glen.

After the 1960 Indianapolis 500, Ward suggested to legendary Formula One team owner John Cooper and to World Champion Jack Brabham, with whom he had become friends, to try a rear-engine car at the Speedway. In October 1960, Ward got a chance to drive Brabham's rear-engine Formula One Cooper-Climax during a feasibility test at the Speedway, which paved the way for Brabham to compete in the 1961 Indianapolis 500 in a rear-engine car.

The car Brabham drove in 1961 at Indy was an extended version of that F1 car. Its ninth-place finish with an underpowered engine was the beginning of the end for the front-engine roadsters.

Ward failed to qualify for the 1965 Indianapolis 500 but qualified for his 15th and final start in 1966. He climbed dejectedly out of his Bryant Heating & Cooling machine after parking it on Lap 74, claiming a handling problem.

The next night at the Victory Banquet, the 45-year-old Ward tearfully announced he was retiring.

"I felt like it was time," he said. "Some drivers go past their time." 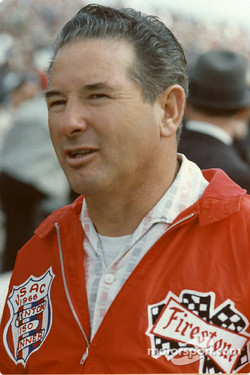 Rodger Ward.
Photo by IMS LLC.
During his career, Ward won in all types of cars. He won 11 times in a Watson roadster, ore than any other driver. His 26th and final champ-car victory came April 24, 1966, at Trenton, N.J. At the time of his retirement, Ward was the only driver to be in the top 10 of all Indianapolis 500 statistics. He won two USAC championships.

After his retirement, he was involved in a number of business ventures.

Ward was a member of the Indianapolis Motor Speedway Hall of Fame, Champion 100-miles-an-hour Club and Indy 500 Oldtimers Club. He was an avid golfer and gin rummy player when he was younger.

Survivors include wife, Sherrie, sons Rodger Jr., David and Rick, and daughter, Robin. All were at Ward's side when he passed away in hospice, as he had been in failing health for several months.

Hamilton unsure how Mercedes might have beaten Red Bull