Fisichella and Bruni second at Spa on Ferrari 458 Italia and AF Corse is in the first position of the GTE Pro team classification. Great podium also for Perazzini-Cioci- Griffin in the GTE Am, at their debut in the WEC 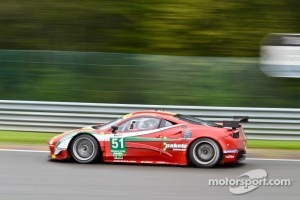 SPA, May 6th – At the end of the FIA WEC 6 Hours of Spa-Francorchamps, Giancarlo Fisichella and Gianmaria Bruni on AF Corse Ferrari 458 Italia GT2 #51 gained the second position of the GTE Pro category after a very tight race and affected by the changeable weather. The two Italian drivers were very fast from the free practices to the chequered flag of the race and had the important final result with a very small gap from the first of category (just 0.6 second). The AF Corse 458 #51 is the first among the Ferrari cars.

Andrea Bertolini and Olivier Beretta, on AF Corse Ferrari 458 Italia GT2 #71, were fourth of the GTE

Another important podium result was the third place in the GTE Am category thanks to the great performance of Piergiuseppe Perazzini, Marco Cioci and Matt Griffin. Their AF Corse Ferrari 458 Italia GT2 #81 was protagonist of a palpable fast race and they were the first crew among the Ferrari GTE Am cars in the Belgian endurance race. Perazzini-Cioci-Griffin are also engaged in the Le Mans Series 2012 and the “6H of Spa” was its debut in the FIA WEC. During the warm-up the AF-Waltrip Ferrari 458 Italia GT2 #61 – driven by Robert Kauffman, Rui Aguas and Brian Vickers – went off the track and the damages forced to the withdrawal. After two races of the FIA WEC, Ferrari is in the second position of the manufacturer GTE championship with 67 points (just 1 point under the top). In the classification of the GTE Pro team, AF Corse is in the first position.