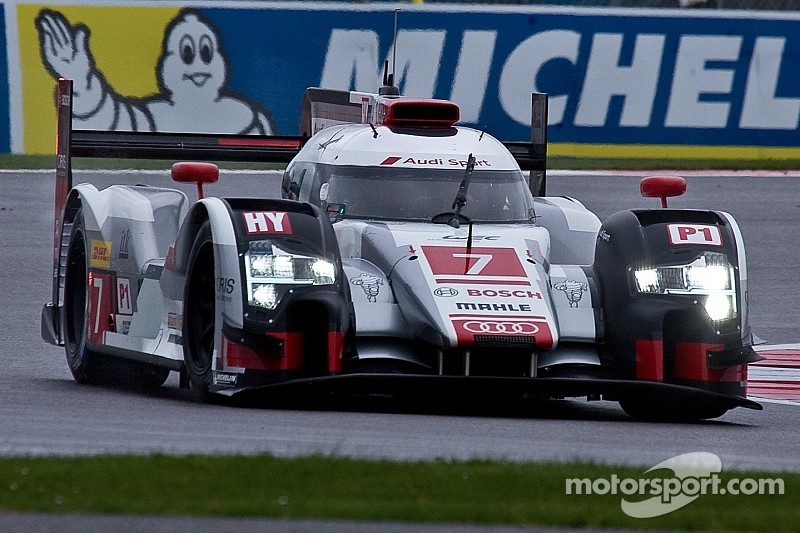 The #7 Audi of Andre Lotterer, Benoit Treluyer and Marcel Fassler came out on top of an enthralling duel with the #18 Porsche of Romain Dumas, Marc Lieb and Neel Jani to win the WEC-opening 6 Hours of Silverstone.

Both cars were split by just 4.610s seconds at the finish, the Audi having enough of a margin to survive a late extra stop for fuel and a stop-and-go penalty for exceeding track limits during its final stint with Fassler behind the wheel.

Those delays virtually wiped out what had been a 1m12s cushion for the #7 car over Jani in the #18 Porsche, which had been built up largely thanks to a superb triple stint in the middle of the race by Lotterer.

The German took over from Fassler just before half-distance, at which point the Audi began to pull away from the sole remaining Porsche following terminal drivetrain trouble for the sister #17 car, which had dominated the early stages in the hands of Mark Webber before its technical woes struck.

Lotterer’s searing pace effectively settled a thrilling scrap for the lead with the #18 Porsche in favour of Audi, as Fassler and Jani traded positions countless times in the previous stint – the 919 Hybrid excelling along the straights thanks to its extra 4MJ of hybrid power in comparison to the R18, which had the edge in the more technical sections of the track.

The two Swiss drivers resumed their battle later in the race with about an hour remaining, swapping places once more while negotiating traffic, but by this stage the Audi had effectively gained the time equivalent of a pitstop.

This proved critical in the latter stages as a result of the drive-through penalty earned by Fassler for lapping a GTE class Aston Martin by using the tarmac runoff at Club, but despite rapidly gaining on the leader in the closing laps, Jani ran out of time to deny Lotterer, Fassler and Treluyer their ninth WEC victory.

Toyota off the pace

Finishing a distant third was the best of the Toyotas, the #1 car of Sebastien Buemi, Anthony Davidson and Kazuki Nakajima, which led at various points as the fuel stops cycled through but was never in true contention for victory, dropping from second to third after a late fuel top-up.

The #2 TS040 Hybrid of Alex Wurz, Mike Conway and Stephane Sarrazin wound up a lapped fourth, having dropped away from the leading group in the early stages.

A lengthy delay to repair loose bodywork in the second hour meanwhile removed the #2 Audi of Lucas di Grassi, Loic Duval and Oliver Jarvis from contention, which ultimately finished four laps down in fifth after a further visit to the garage to replace the front end.

Class wins for G-Drive and Ferrari

The LMP2 class was dominated by the G-Drive team, with the #26 Ligier of Sam Bird, Julien Canal and Roman Rusinov triumphing over the sister #28 machine of Gustavo Yacaman, Ricardo Gonzalez and Pipo Derani by a lap after the early challenge of the KCMG squad fell away when the #47 Oreca sustained radiator damage with Nick Tandy behind the wheel.

Honours in the GTE Pro class fell to reigning class champions Gianmaria Bruni and Toni Vilander in the #51 AF Corse Ferrari 458, which had spent a portion of the race battling with the sister #71 car of James Calado and Davide Rigon before pulling away late on in the race.

The #71 car was then reeled in by the #92 works Porsche of Richard Lietz and Michael Christensen, which moved up into second as the latter took the helm during the car’s final stop, the duo falling 10 seconds short of Bruni and Vilander in the final reckoning.

Though the GTE Pro contingent of Aston Martins struggled in race trim after their domination of qualifying, the British marque could at least take solace in a GTE Am class victory courtesy of the #98 Vantage of Paul Dalla Lana, Pedro Lamy and Mathias Lauda.