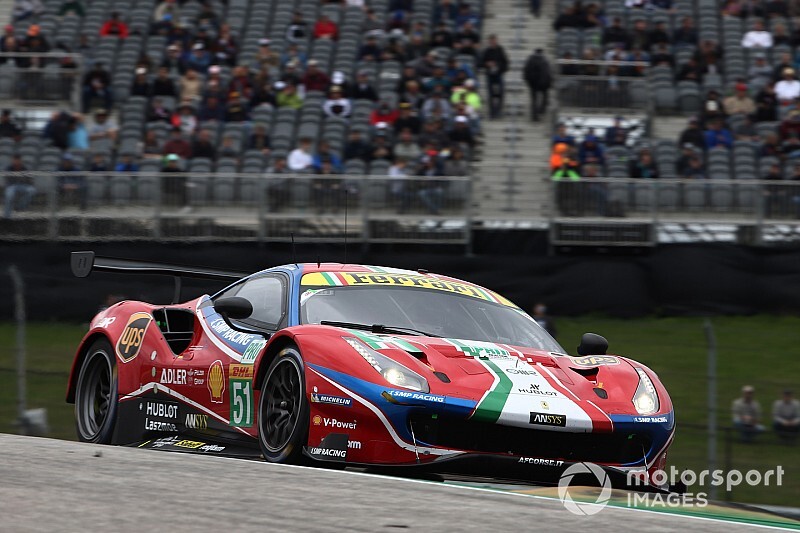 James Calado says he was left with “mixed emotions” after Sunday’s FIA World Endurance Championship round in Austin after balance issues thwarted any chance of taking victory in the GTE Pro category.

Calado and AF Corse teammate Alessandro Pier Guidi secured the final spot on the podium at the Circuit of the Americas after the British driver successfully passed the #97 Aston Martin of Alex Lynn and Maxime Martin in the final hour.

The result marked only the second podium of the 2019/20 WEC season for the #51 Ferrari, but Calado and Pier Guidi were never in contention for race victory - with even a rostrum finish looking unlikely at one stage.

Calado said the team ought to derive satisfaction from the points haul it secured in the first North American round of the season, but admitted that a chance of victory was lost because of a poorly-balanced car.

“We struggled with balance, especially at the start of the race in hotter conditions,” Calado told Motorsport.com. “Then basically both cars had a lot of understeer and we struggled in that respect. I think we were there to fight.

“It wasn’t a smooth race in terms of traffic and things like that. Towards the end I pushed as hard as I could. [I] think our tyre wear was good.

“The Aston struggled a bit with brakes. So we caught them out. And managed to make a move. Bit kamikaze from Alex [Lynn]. But it makes a good show; it’s good racing.

“So to get third, kind of mixed emotions. I thought we could have won it today. Again, I think with the balance issue we just missed a couple of tenths a lap. Probably [we lost] five seconds per stint and that was probably the biggest thing.

“The points are good, but the car was amazing yesterday and today we struggled. We didn’t change anything. So we need to look at what the issue is.”

Calado and Pier Guidi remain second in the GTE drivers’ standings after Austin, but the championship-leading #95 Aston Martin crew of Nicki Thiim and Marco Sorensen has extended its advantage to 26 points after its third victory in five races.

Calado had previously conceded that the title chances of the #51 Ferrari were over after Bahrain, but he and Pier Guidi were catapulted back into contention after their victory in Shanghai was reinstated by the FIA.

“I think we are flat out, we got nothing left to give,” Calado said. “We’ll see if we can fight. We don’t know what the others are doing. They might have more, they might not - who knows?

“I think the Aston does [have more pace]. We could stay with them on the straights today, whereas there have been races where they’ve initially pissed off in the distance.

“It seems they’ve got a little bit more, but let’s see what happens. Sebring is a long race, it’s hard on the cars."