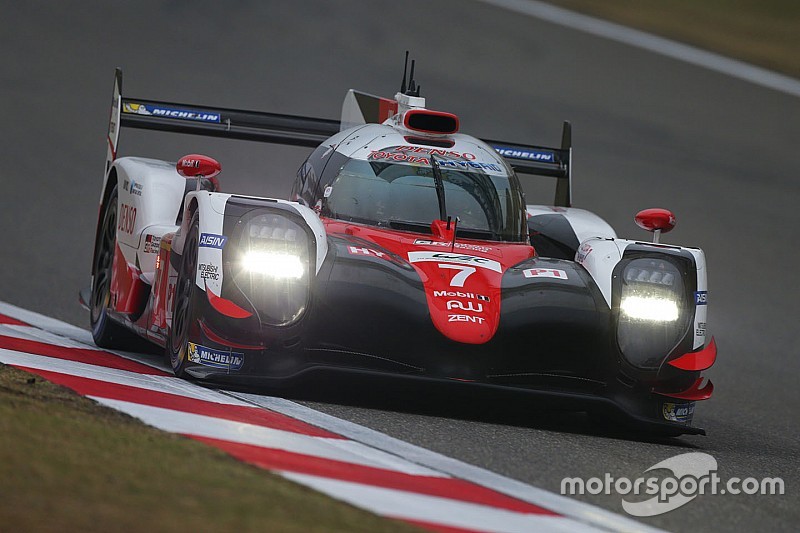 Toyota went fastest in the two opening sessions of free practice for this weekend's FIA World Endurance Championship round in Shanghai.

The #7 TS050 Hybrid topped the times with Mike Conway at the wheel in each of the 90-minute sessions, the Briton edging out the best of the Porsches in the opening period and the sister Toyota in FP2.

Conway's fastest time of the day was a 1m44.741s posted early in session two, which represented an improvement of nearly 2.5 seconds on his mark set earlier in the day.

Anthony Davidson ended up second in the faster afternoon session with a 1m45.131s, while the quickest Porsche 919 Hybrid took third with a 1m45.269s from Brendon Hartley.

The sister Porsche was fourth on a 1m45.616s from Nick Tandy, who had earlier been second fastest in FP1.

The #13 Rebellion Oreca 07 led the way in LMP2 in both sessions.

Mathias Beche was fastest on a 1m52.533s in the opening period, before teammate Nelson Piquet Jr improved by two seconds in the later session to end up on a 1m50.556s.

Thomas Laurent was less than a tenth behind with a 1m50.884s in the second session aboard the best of the Jackie Chan DC Racing Orecas.

The second Rebellion car ended up third with a 1m50.946s from Julien Canal.

Ferrari and Ford shared out GTE Pro honours across the two sessions.

Porsche ended up with the second fastest time of the day, a 2m02.539s from Richard Lietz in the fastest of the two factory 911 RSRs.

Mucke's first-session benchmark put him third in the times from the day.

Matteo Cairoli was fastest in GTE Am for the Dempsey-Proton Porsche squad.

The opening practice session was delayed by 90 minutes courtesy of radio communication problems between race control and the marshals.