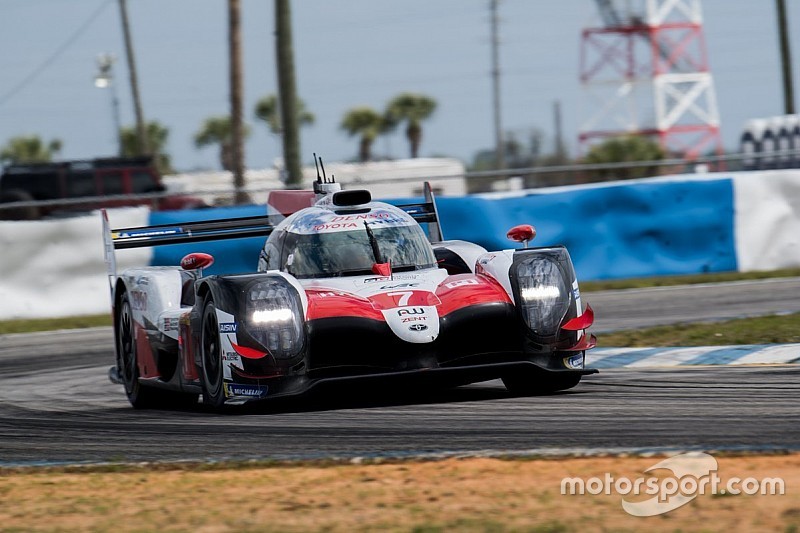 Toyota established a new unofficial lap record at Sebring International Raceway during testing for next weekend's FIA World Endurance Championship round at the Florida airfield track.

On the first day of a two-day test being attended by the majority of WEC teams ahead of the Sebring 1000 Miles on March 15, Mike Conway set a best time of 1m41.211s in the #7 Toyota TS050 Hybrid during the afternoon session.

That was 2.7 seconds faster than the existing lap record of 1m43.886s held by Marcel Fassler, set at the wheel of an Audi R18 e-tron quattro in qualifying for the 2013 Sebring 12 Hours - the most recent time LMP1 cars took part in the race.

Fernando Alonso likewise comfortably beat Fassler's record in the #8 Toyota with a best effort of 1m42.177s in the afternoon.

Conway also led the way in the morning session with a time of 1m42.673s, which was 0.157s faster than Kazuki Nakajima's quickest lap in the #8 car.

With DragonSpeed absent from the test and ByKolles skipping the Sebring round altogether, the sixth and final LMP1 runner was the #1 Rebellion, whose best time was set by Neel Jani.

That was enough to beat the #36 Signatech Alpine Oreca of Andre Negrao by 0.123s.

Both Jackie Chan DC Racing and DragonSpeed opted to skip the test, having both taken part in the private running at Sebring arranged by Toyota last month.

Ford headed the times in GTE Pro with newcomer Jonathan Bomarito putting the #67 Ford GT 0.174s ahead of the sister #66 machine wheeled by Olivier Pla with a best time of 1m58.318s.

Porsche occupied third and fourth places, Kevin Estre putting the #92 911 RSR ahead of the #91 car, while the AF Corse-run Ferrari 488 GTEs were fifth and sixth.

Corvette Racing, which has entered a single C7.R for the Sebring race, did not take part.

Aston Martin's Pedro Lamy set the quickest time in GTE Am by nearly half a second ahead of fellow ex-Formula 1 driver Giancarlo Fisichella in the Spirit of Race Ferrari.