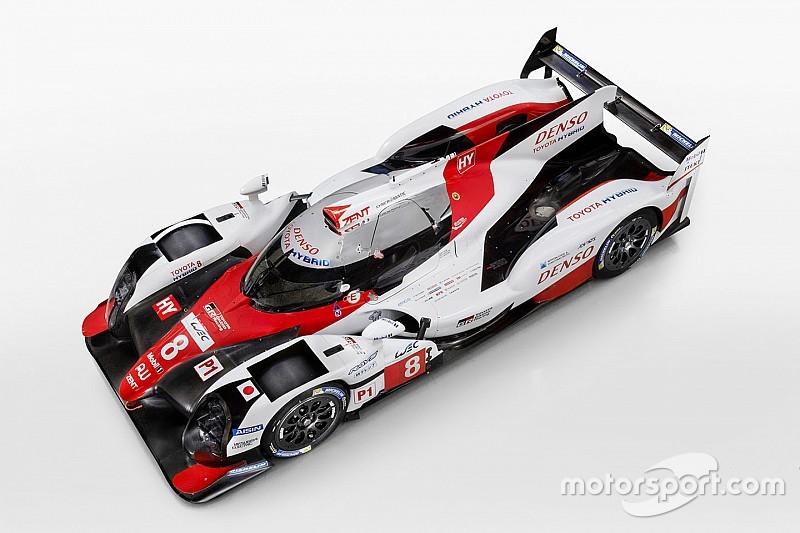 Toyota has revealed the first images of its TS050 Hybrid LMP1 challenger, which will contest the 2017 FIA World Endurance Championship and the Le Mans 24 Hours.

The Japanese manufacturer released renders of its revamped prototype on Friday morning, ahead of the start of WEC's two-day Prologue test at Monza - where it will run in low-downforce specification.

Like last year, the TS050 Hybrid uses a 2.4-litre V6 engine with a 8MJ hybrid system, the maximum permitted by LMP1 regulations, although both the powerplant and energy recovery systems have undergone extensive overhauls since 2016.

After last year's heartbreaking near miss at La Sarthe, the Japanese manufacturer has entered three cars for the 2017 running of Le Mans for the first time since 1999.

Team President Toshio Sato made it clear that finally securing Toyota's first win in the French endurance classic would be the squad's main goal for the season.

"The whole team is motivated and determined for this season," said Sato. "We want to win, there is no doubt about that, but we know it will be an incredibly tough fight with Porsche.

"Having a third car is an additional opportunity and we will do our best to again deliver a great spectacle for the fans at Le Mans. We know from painful experience Le Mans is a very difficult race to win, but that is our target.

"Everything - the car, the team and the drivers - has to work perfectly to achieve our goal. We will see in June if we have done enough."

Jose Maria Lopez has been added to the full-time driving strength, replacing Stephane Sarrazin, who moves across to the third car - entered for Spa as well as Le Mans - alongside Toyota returnee Nicolas Lapierre and Super Formula champion Yuji Kunimoto.

Buemi and Lopez, however, will be absent for testing as they travel overnight to Mexico City to race in Formula E - with Lapierre and Kunimoto standing in for the pair respectively in Monza.

Toyota extends WEC programme through to 2019