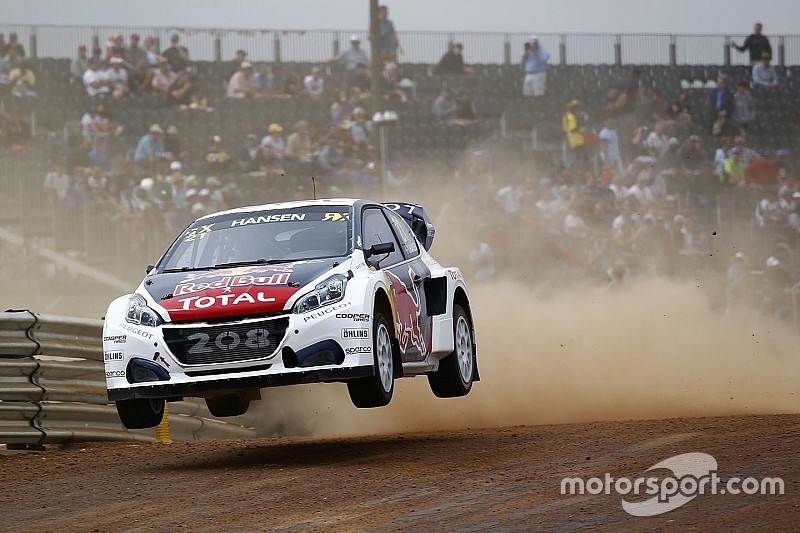 Swedish brothers Timmy and Kevin Hansen are working on deals to remain part of Peugeot’s World Rallycross line-up for 2018.

The French marque announced in October that it would continue in the series with nine-time World Rally Champion Sebastien Loeb, but is yet to announce who else will drive for the squad.

Peugeot has been present in World RX since its inception in 2014, running in partnership with the Hansen Motorsport squad owned by 14-time European Rallycross Champion Kenneth.

But it has now taken the programme in-house, utilising resources from its now defunct Dakar Rally programme. Hansen himself is expected to remain with the outfit as Sporting Director.

His eldest son Timmy, who has five World RX wins to his credit and challenged Petter Solberg for Drivers’ crown in 2015, is working on securing a drive with the team for 2018.

“The fear last year was that I would be without a seat and I was very worried for a long time actually," he told Motorsport.com.

“It was great news when Peugeot actually announced that they’re continuing and then I’ve worked super-hard on trying to get that seat.

“I think there are three teams that are able to win and you want to be in one of those places. Seb is already done for one of the seats and obviously the second seat is a very good one.

"Peugeot are putting in big effort and we have a good relationship, but as I said, things will be announced soon.”

Hansen's younger brother Kevin drove a year-old works-backed 208 WRX in the World RX series last year, and is hoping to remain with the team for 2018.

“It’s really difficult to get things done when you were eighth in the world championship [last season],” he told Motorsport.com. “Peugeot is growing as a team and I’ve worked hard to get a seat with them.

"Going from Peugeot-Hansen to more Peugeot shows they are putting more effort into it and that means it’s probably going to be a faster car.

"To have Sebastien as a teammate is also something that’s really high in the ranking, so it’s a very popular seat.

"Hopefully it will be announced soon what I can do. It’s not long until testing for everybody begins, so it would be very nice to have things sorted before then.”