Double rations for the DS3 WRCs 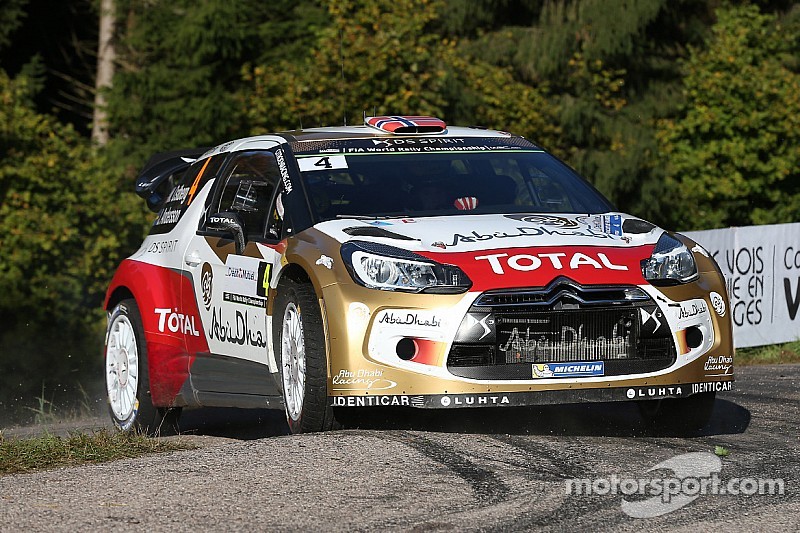 The World Rally Championship’s only mixed-surface round, with one leg on gravel followed by two days on tarmac, Rally de España provides the crews and teams with a unique challenge.

Since it first appeared on the World Rally Championship calendar in 1991, Rally de España has been won by all of Citroën Racing’s models. In 1999, the Brand claimed its first ever win in the WRC thanks to the Xsara Kit-Car driven by Philippe Bugalski and Jean-Paul Chiaroni. From 2005 onwards, Sébastien Loeb and Daniel Elena began record-breaking series of eight consecutive wins in the Xsara WRC (2005-2006), C4 WRC (2007-2010) and DS3 WRC (2011-2012).

Since 2010, Rally de España has become a unique event in the WRC. The season’s only mixed-surface event, it involves driving on gravel and tarmac in the same car. “It’s a rather specific challenge,” insisted Yves Matton, Citroën Racing Team Principal. “The main difficulty lies in converting our DS3 WRCs at the end of day one. This rally requires specific preparations and the demands in terms logistics are more significant here. Each of the drivers must also be capable of adapting to this change in road surface. We work on the parts that need to be changed and the set-up, but a large part of the adaptation comes down to the crews.”

“During the service period on Friday evening, eight mechanics will be hard at work for seventy-five minutes. Put simply, we only keep the body shell and the engine,” summarises Didier Clément, the DS3 WRC’s Chief Operations Engineer. “We have to prepare the assignment of the various tasks very meticulously. Everybody must know what they have to do. A few days before the rally, our teams practice switching from one configuration to the other.”

The other specific feature of the Catalan event is that a fairly significant portion of the first ‘gravel’ day is actually contested on tarmac. This is particularly true on the middle section of the long Terra Alta stage: “Traditionally, big gaps can open up on these sections. The cars don’t react the same way on tarmac roads, they tend to be less responsive. So it’s up to the driver to find the right pace so as to not overuse the tyres and keep as much grip as possible.”

Kris Meeke improving all the time

“I feel I’m getting stronger and stronger,” commented Kris Meeke when he reflected about how he felt in the second half of the 2014 season. After finishing on the podium at Monte-Carlo in January, the Briton then took advantage of each of the following events to develop his knowledge of the WRC. And since the end of July, he has demonstrated his speed on all surfaces with third places in Finland, Australia and France.

“Every World Championship driver needs time to feel comfortable and to be able to show their potential,” he stressed. “The experience I have acquired is beginning to show. I’m managing to anticipate much more. My speed is more natural, and I’m able to go faster without taking as many risks as I did in the past.”

In Spain, Kris will have to learn about the stages again. Although he has previously contested the rally six times, he is less familiar with the current mixed-surface itinerary, having only experienced it once before in 2011: “The stages on tarmac are pretty similar to those that I already know. It’s true that I still need to get to grips with the gravel roads, but I’ll be doing my very best. We know it’ll be very close at the front. We just have to keep edging closer to first place.”

A new challenge for Mads Østberg

Quick on gravel, Mads Østberg has shown improvement each time he has competed on tarmac. In Spain, with day one predominantly on his preferred surface and the rest of the rally on tarmac, he has the chance to record a good result. “We learned a lot during the earlier rounds in Germany and in France,” confirmed the Norwegian. “It’s up to us to make the most of the experience we have acquired recently and the progress made with the team to keep moving in the right direction.”

Mads is eager to line up at start of this unusual rally: “I like the type of gravel stages here. I have some fond memories of competing here, both in dry conditions and in the wet. I hope that I can at least be in the top three after the first leg. After that, I’ll need to adjust as quickly as possible to rediscover my reflexes on tarmac. We’ll have to do a full reset overnight and then wake up the next morning in ‘tarmac mode’. The key will be to use the new Michelin tyres really well and not overheat them. If everything goes well, then we should be capable of getting a good result.”

Currently battling to win a second Middle East Rally Championship title, Khalid Al Qassimi returns to the WRC at Rally de España. Having competed with the Citroën Total Abu Dhabi World Rally Team in Sweden, Portugal and Italy, he is set to take on his first rally (partially) on tarmac for a year.

“I love the type of tarmac stages you get at Rally de España,” emphasized Khalid. “But if the roads are wet, it can become an entirely different challenge. On the other hand, Friday’s leg isn‘t one of my favourites on gravel. I might need a bit of time to get my bearings.”

Highly involved in the life of the team, the Abu Dhabi driver is also keen to offer his support to his team-mates: “I would like to wish the very best to Kris and Mads. I hope they can fight for the leading positions and score as many points as possible.”

Abu Dhabi Racing will also be represented by Mohamed Al Mutawaa and Stephen McAuley, registered in the WRC3 category in a DS3 R3. This penultimate event of the season will equally provide Sébastien Chardonnet/Thibault De la Haye and Stéphane Lefebvre/Thomas Dubois with an opportunity to compete in the WRC2 category in their DS3 R5s.

From gravel to tarmac

Unlike last year, the crews will contest the gravel stages before tackling two days on tarmac. In gravel configuration, the WRCs will complete at least two shakedown runs on Thursday between 8am and 9.30am, around three kilometres from the service park.

At 1pm, the WRCs will leave Salou and head for the start of the opening stage, held on tarmac in the streets of Barcelona (3.2km/6.08pm). After covering a total distance of 222 kilometres, the cars will come back to parc ferme from 8.08pm.

Friday morning will see the serious action get underway with a first loop of three gravel stages: Gandesa (7km/8.33am), Pesells (26.59km/2.19pm) and Terra Alta (35.68km/10.01am), with its mix of both surfaces. After a thirty-minute service in Port Aventura starting at 12.06pm, the same loop will be repeated in the afternoon. From 5.22pm, all the cars must be converted to their tarmac configuration during a seventy-five minute flexi-service.