Neuville and Evans on the pace in Wales 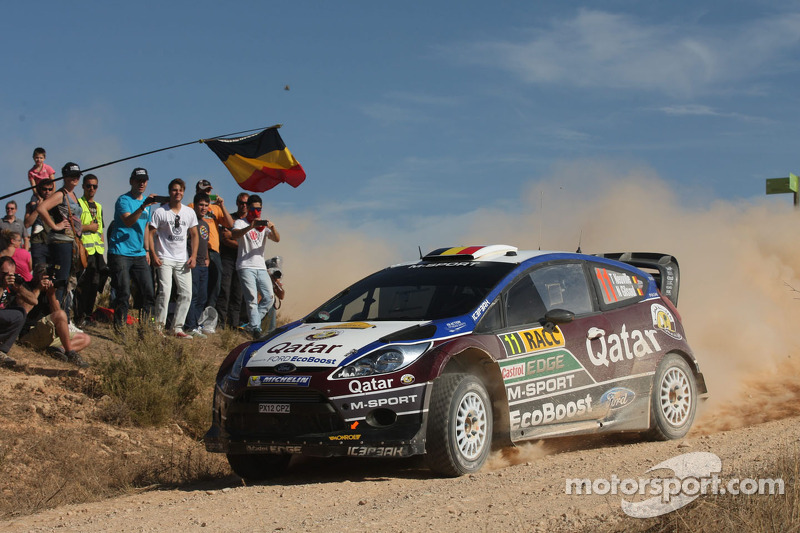 NEUVILLE AND EVANS ON THE PACE IN WALES 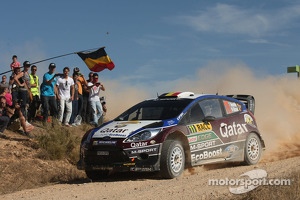 Commencing with three tricky stages under the cover of darkness, Wales Rally GB dished out a challenging start for the crews. Experience was arguably the key to success but that didn’t stand in the way of Neuville and co-driver Nicolas Gilsoul.

This is only the Belgians’ second appearance at the British fixture – and their first taste of the Welsh forests with the Ford Fiesta RS WRC – but their skill, speed and determination saw them post a string of top times including a stage win through the first pass of Clocaenog (SS3). Not even an encounter with a rock on Penmachno (SS2) could halt the 25-year-old and he goes into tomorrow just 3.2 seconds shy of the rally lead.

In the Qatar M-Sport World Rally Team, Mads Østberg and Evgeny Novikov hold fifth and eighth places respectively. Nursing an issue with their Fiesta RS WRC’s gearbox, Østberg and co-driver Jonas Andersson set some strong times to keep themselves well and truly in the hunt for the podium shootout. With the issue resolved in service, the Scandinavians are sure to be back to their best through tomorrow’s classic tests.

In the sister Fiesta, Novikov and Ilka Minor were suffering from a loss of power. With the team working to resolve the issue, the adoring fans can look forward to the Russian’s customary dose of ‘maximum attack’ as the event continues.

However it was arguably in WRC 2 where the real story lay as local-man Evans stormed through the field to lead the category by 13.2 seconds. Proving just how capable they are behind the wheel of M-Sport’s Ford Fiesta R5, Evans and co-driver Daniel Barritt secured two stage wins to claim an impressive ninth place in the overall rankings at the end of Day 1.

“It has been a difficult evening but we are quite happy with our pace. Of course it is slippery and you need to be careful in every corner, but so far so good. We had a bit of a moment on the second stage when we cut a corner and hit the underneath of the car. We had a small issue with the gearlever after that, but the car seems to be very strong! I thought that it was over for us, but the car was still going and we went on to set the quickest time in the next stage (SS3).

“Tomorrow is another day and its stages are well known to the other drivers so I hope it is not a disadvantage to us. We’ve only rallied them once but we are well prepared and we will try and stay in the fight.”

“I think we must have touched something on the first stage [which caused the issue with the gearbox] because it happened quite suddenly. We went onto a rougher section and straight away I was really struggling and lost a lot of time. It makes it really difficult to change gear – especially changing down through the gears. You have to be a bit more careful and you have to work much harder!

“Tomorrow should be a really good day for us. We know those stages very well and we are going to go flat-out to make back the time.”

“It’s not been an easy evening – the stages are very slippery and challenging but we also have a loss of power from the car. We’re not sure exactly what the issue is at the moment, but I feel as though we are driving well so hopefully we can get it resolved and start to show our true pace again tomorrow.”

“It’s not been an easy evening – three very different stages in terms of surface and grip levels – but I think we had reasonably good pace on all three. We didn’t have fantastic rhythm on the first one, and although it got better on the second, we were still a little nervous on the really high-speed sections. It is very fast and narrow in there [SS2] and it’s the first time I’ve done that stage in that direction. All in all it’s been an OK start. The car is working very well here so we just need to keep it up tomorrow.”

“It’s been a good start for Thierry [Neuville] – he is well and truly in the fight and the top-three have already pulled out a strong lead. He was very lucky on SS2 which only goes to make his SS3 victory all the more impressive. The car took a huge impact and we have had to do a lot of repairs in service, but hopefully with the car fully rectified, we can see some more great times from him and Nicolas [Gilsoul, co-driver] tomorrow.

“Elfyn [Evans] too has done a great job in WRC 2 to eke out a good lead over the other competitors – and of course it is fantastic to see so many M-Sport cars excelling in the series!”

Night owls – Volkswagen lead from the off in Wales