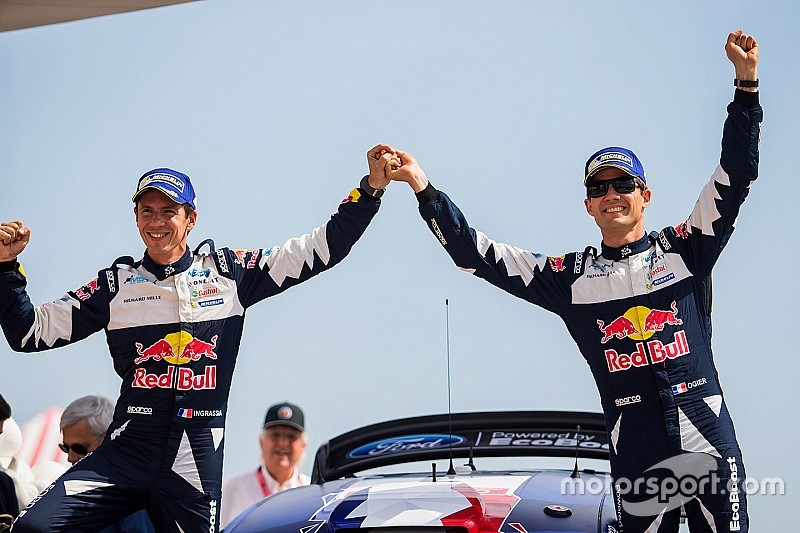 Sebastien Ogier's Rally Portugal victory should serve as a launchpad to his fifth successive WRC title, according to M-Sport team principal Malcolm Wilson.

Wilson was fulsome in his praise of his driver's second win of the season, describing his success in Portoas "flawless".

The M-Sport boss also talked of his relief at seeing Ogier turn around what had been a difficult previous outing in Argentina, where he finished fourth.

"We did a lot of work at the pre-event test on the balance of the car. I'll admit Argentina was a tough one for Seb, but he's shown what he's capable of turning that around.

"He has known from the start of us working together just what we're prepared to put into this year and he's absolutely coming with us.

"The partnership is working perfectly and last weekend, for me, was the true demonstration of the potential of the package."

Reluctant to go into the technical details of what had been changed at the team's test ahead of last weekend's Rally Portugal, Wilson said: "It was about the front-rear balance of the car.

"The changes we made gave him that more natural feeling in the car and we all know what happens when you feel at ease and more relaxed. He was sensational and his drive was flawless."

Ogier moved into the lead of the rally on Saturday's third stage, but it was his effort from the front of the field on Friday that caught Wilson's eye.

"He won the rally on Friday," he said. "That was an incredible day of driving to do what he did from where he was on the road. He was superb."

The bad news for the rest of the field is that there's more refinement to come ahead of next month's Rally of Italy in Sardinia.

"We've got a test [in Sardinia] and we can definitely bring more out of the car for him," said Wilson. "There are more improvements to be made and he goes to that event with the kind of real confidence I think we saw for the first time this season from him.

"He’s got the perfect platform to towards that next drivers' championship from here."

Ogier's fifth victory in Portugal equaled the record of Markku Alen and moved the Frenchman further ahead in the drivers' championship.

He is now 22 points ahead of Hyundai's Thierry Neuville, while M-Sport heads the Korean manufacturer by 26 after six of 13 rounds.