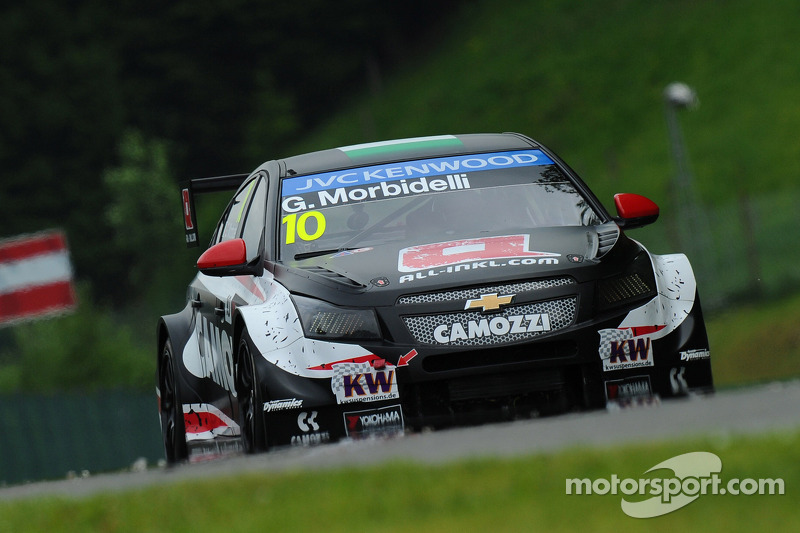 Citroën's streak of poles in WTCC has come to a screeching halt.

Gianni Morbidelli took a brilliant pole at the Salzburgring, becoming the first driver to break the Citroën domination in the Super Pole exercise this season. This on top of being the only non-Citroën driver to have won a race so far.

The ALL-INKL.COM Münnich Motorsport Italian ace, always among the fastest since the beginning of the weekend, made a perfect lap at the wheel of his Chevrolet RML Cruze, stopping the watches at 1.22.137.

He preceded the two Citroën cars of Yvan Muller and Sébastian Loeb. Fourth was Tom Coronel, in the ROAL Motorsport Chevrolet, who made it to Q3 for the first time this year. José María López closed the top quintet, after having suffered a spectacular spin in turn 9 in Q1, luckily avoiding the barriers.

Morbidelli had topped the time sheets in Q1 as well, showing excellent form and beating the three C-Elysée cars of Muller, Loeb and López, with Borković in fifth position. The Serbian would then be victim of the fast Turn 9 in his very first lap of Q2. Fortunately, the Campos Racing Chevrolet suffered much less damage than its sister car of Hugo Valente, who heavily crashed in the same corner in the morning.

Q2 saw Muller fastest ahead of the Chevy cars of Coronel and Morbidelli, while the Honda cars seemed to deliberately targeting the last positions in the top ten. The first two rows of the Race 2 grid will be trusted by Tarquini, Michelisz, Bennani and Monteiro. Franz Engstler took once again pole among the TC2 cars, this time preceding John Filippi.

The LADA drivers made a final, desperate attempt to squeeze among the top-twelve, but they failed to make the cut and Tarquini salvaged his 12th position from Thompson by less than two tenths.

Engstler was the fastest man in TC2, ahead of Filippi and Di Sabatino.

When the session resumed, Muller (1:22.085) and Coronel (1:22.168) climbed to first and second, dropping Chilton out of the top five. The four Honda cars of Monteiro, Bennani, Michelisz and Tarquini did not even try to improve, aiming for filling the two front rows on the top-ten reverse grid for tomorrow’s second race.

Morbidelli came third, and in the first two sectors laid the foundations for a remarkable pole position (1:22.137). Coronel (1:22.432) managed to demote López by one place.

The last one to qualify, Muller was clocked at 1:22.186, that was not enough to beat Morbidelli but placed the reigning champion in second position.

Gianni Morbidelli: “Honestly, I am the first surprised of this performance. I pushed very hard but did not think I could make the pole position. It is a very important result and it proves that the team’s hard work is paying off and that we improve constantly. I was fast in Q1 and Q2, but was lucky to benefit from the slipstreaming of other cars. In Q3, without that help, it was nice to stay ahead I used new tires only in Q3.”

Yvan Muller: “I am pleased with my lap time in Q3, I didn’t make mistakes and everything went well, although from the outside things can look differently, because in Q2 I had a slightly better time and was first, but that was because I could be towed by a car in front me. This said, tomorrow the decisive factor will be the front tires, especially the left one. Those who have raced here know how tough the track is on the front left. It will be crucial to preserve the tires and even so, one has to keep his fingers crossed.”

Sébastien Loeb: “I was a little bit slower in the third sector, where everything happens. I did my best and I am reasonably happy, considering this is my first time on this track. I must admit it is a very difficult and very fast track, with a couple of quite scary corners.”

Franz Engstler: “I came to Salzburgring for the first time 26 years ago, in Formula 3, and the place has the same appeal to me. It’s a very special track, I enjoy a lot racing here. The car was 5 tenths faster than last year, that means the team did a great job and I thank them for that.”

Difficult but not impossible mission for Tiago at the Salzburgring