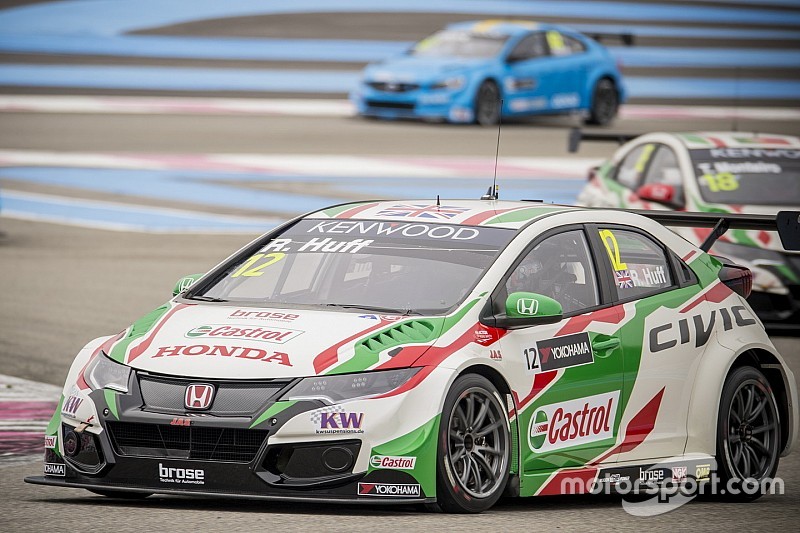 Rob Huff took his first victory in the WTCC since Macau 2014 in the opening race in France, jumping into the lead at the start.

The British driver took the chequered flag with over a two second lead on his debut for the Honda, as battles raged behind in an intense reversed grid race.

Hugo Valente started from pole position in his new berth at Lada Sport, but the Frenchman didn’t make as good a start as the drivers in second and fourth.

Both Huff and Sebastien Loeb Racing Mehdi Bennani’s Citroen got ahead of Valente into the first corner, with Volvo’s Fredrik Ekblom dropping in behind them in fourth.

The 80kg-laden factory Citroens made little progress at the start, with Jose Maria Lopez dropping a spot from tenth to 11th, while Yvan Muller stayed eighth at the end of the first lap.

Disaster was soon to his the four-time champion though, with Muller judged to have made a false start, and was given an effectively race ending drive-through penalty which saw him finish in 13th and outside of the points.

Norbert Michelisz managed to work his way forward from fifth, passing the Volvo of Ekblom on lap four for fourth, and eight laps later put a pass on Valente’s Honda to claim the final podium position.

Ekblom hit trouble on lap five and spun out with suspension damage, returning to the pits, promoting Monteiro to fifth, who would later also pass Valente to finish fourth, with Lopez now sixth.

While on lap seven, Lada’s new signing Gabriele Tarqini became the second retirement of the race following a collision with SLR driver Gregoire Demoustier, though the French privateer was able to go on and finish in tenth, picking up the final point.

Battling throughout the race were the Dutch drivers Nicky Catsburg and Tom Coronel, driving for Lada and ROAL Chevrolet respective, fighting for seventh going into the final lap.

The two made contact, which allowed the Volvo of Thed Bjork through the pair of them, with the Swede recovering from the back of the grid following his exclusion from qualifying.

Coronel and Catsburg continued to fight side-by-side on the final lap, with Catsburg coming out on top.

Huff’s win scores him 25 points which puts him in the lead of the championship, with Bennani on 18 and Honda team-mate Monteiro on 17.