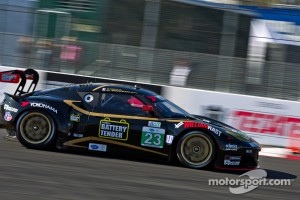 TAVERES, FLA. (May 8, 2012) - Bill Sweedler and Townsend Bell are ready to introduce the No. 23 Lotus Alex Job Racing/Battery Tender/Yokohama/Lotus Evora GT to the twists and turns of Mazda Raceway Laguna Seca at this weekend's American Le Mans Series (ALMS) Monterey presented by Patron, to be run on Sat., May 12.

Laguna Seca will be the car's second run of the season. The team has been working on checking boxes off of the development list since Long Beach. The 2.2-mile, 11-turn Laguna Seca circuit will be the first natural terrain road course that the car will compete on. In addition, the six-hour race on Saturday will be a development run with every lap. Sweedler (Westport, Conn.) and Bell (San Luis Obispo, Calif.) are up to the challenge.

"The Lotus AJR team has been working 24/7 to get our Lotus Evora GT competitive for Laguna since finishing the Long Beach race," Sweedler said. "We are coming to Laguna knowing that this car has performed well under endurance conditions last year in Europe. However, the American tracks are different and new to the Lotus, so we are focused on building experience and data for the team going forward for the rest of the season. I can't wait to take the mid-engine Evora through the famous Cork Screw exchange - this car was made to dominate tight twisters!

Laguna Seca is a great venue and awesome circuit which is surrounded by one of the most beautiful scenic areas in the U.S. The local fans are avid sports car enthusiasts who always come out en-mass to support the event."

For Bell Laguna Seca is a home game.

"Laguna Seca is where it all began for me," Bell said. "I did my first race school there and did many laps learning about race cars from the Skip Barber instructors. I raced open wheel cars from 1996 through to 2002. It was a great moment when I was able to seal the Indy Lights Championship at my home track in 2001. That next year I was able to get a strong seventh-place finish in the ChampCar Series. I consider Laguna Seca my home track and the best in North America. In addition, the Monterey peninsula is a great part of the world. I also returned there a few years ago and did the Superbike School. That was a blast!

We had the first outing with the Lotus Evora GT at Long Beach and took the checker. The team is working hard on developing this new entry into ALMS' toughest category, the GT Class. Bill and I are still getting acclimated to the new car and what it will take to be competitive in the class that is crowded with top cars and drivers. We have two months off after Laguna Seca to keep moving forward with the car's development, including an updated engine."

In addition to his duties with Lotus Alex Job Racing, Bell will be missing the first day of practice at the Indianapolis Motor Speedway where his No. 99 BraunAbility-Schmidt Pelfrey Motorsports/Honda/Dallara will be waiting for him to arrive on Sunday for the second day of Indy 500 practice.

Team principal Alex Job has had his crew improving the Lotus Evora GT since Long Beach.

"We have been working very hard on the car in the shop," Job said. "We came away with a large list of to-do items from Long Beach, and we were able to get many of those projects done. Laguna Seca will be the first time that we run the car on a natural terrain road course, so we will have another list to work on over the Le Mans break."