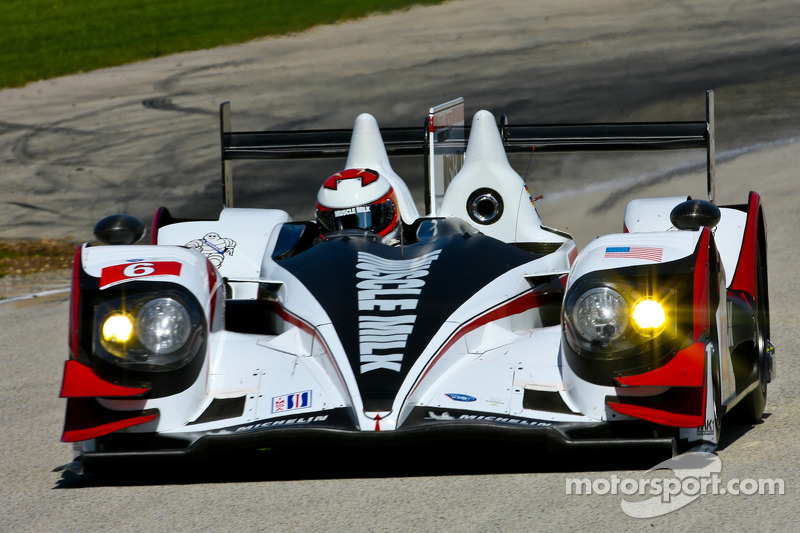 Full Speed Ahead for Luhr, Muscle Milk at Road Atlanta

With a lead in the American Le Mans Series presented by Tequila Patrón’s P1 championship heading into the last round of the year, Lucas Luhr and Muscle Milk Pickett Racing threw down a bit of a gauntlet Monday with the fastest time in testing for Petit Le Mans powered by Mazda. 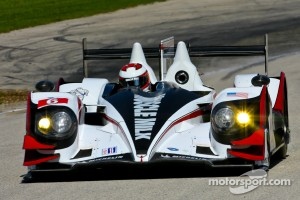 Luhr turned a lap of 1:10.150 (130.349 mph) in the No. 6 Honda Performance Development ARX-03a prototype at Road Atlanta, good enough for a comfortable margin back to fellow title contender Dyson Racing. The German, driving with Klaus Graf and Romain Dumas, was 1.979 seconds clear of Dyson’s No. 20 Lola-Mazda coupe driven by Tony Burgess, Chris McMurry and Mark Patterson.

Luhr and Graf lead the P1 title race by 13 points over the Dyson duo of Chris Dyson and Guy Smith, who are seeking repeat championships. All the Muscle Milk entry must do is complete 70 percent of the race distance to clinch its first title. Smith and Dyson’s No. 16 Lola-Mazda, which they will drive with Steven Kane, was third overall at 1:12.314 (126.449 mph).

The P2 championship also comes down to the final race. The team’s No. 95 HPD ARX-03b of Dario and Marino Franchitti, and team owner Scott Tucker set a time of 1:13.025 (125.217 mph). Conquest Racing’ No. 37 Morgan-Judd of Martin Plowman and David Heinemeier-Hansson was just 0.525 seconds back.

Like Muscle Milk Pickett Racing, all Level 5 must do to win its second straight class title is finish 70 percent of the P2-winning car’s race distance.

The Nissan DeltaWing ended Monday fifth-fastest at 1:13.462 (124.473 mph). The revolutionary prototype is running as an unclassified entry with Gunnar Jeannette and Lucas Ordonez driving. Petit Le Mans is the North American debut for the DeltaWing, which features half the weight, fuel and tire usage of a standard prototype. 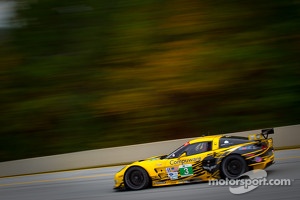 Although Monday was only a test day, the GT field was as close as ever. Corvette Racing’s No. 3 Corvette C6.R set the day’s best time in class at 1:19.769 (114.631 mph). The entry – with drivers Jan Magnussen, Antonio Garcia and Jordan Taylor – turned the most laps of any car – 132 - in Monday’s four-hour afternoon session.

BMW Team RLL’s No. 55 BMW M3 GT of Bill Auberlen, Jörg Müller and Jonathan Summerton was second at 1:19.838 (114.532 mph), just 0.069 seconds back. The top seven cars were within 0.665 seconds. Extreme Speed Motorsports No. 01 Ferrari F458 Italia was a whopping 0.097 seconds back of the leading Corvette. Scott Sharp, Johannes van Overbeek and Toni Vilander will drive that car.

ALMS cars return to the track for a two-hour test Wednesday starting at 1:15 p.m. ET.

(Being back at Road Atlanta) I did Petit Le Mans in 1999 with Jim Matthews in a Ferrari. That’s the only time I’ve raced on the current configuration. Before then the track still had The Dip – and I miss that. Every time I came hauling it and pointed it at the bridge abutment, I would think ‘This is a little silly!’ But it was a hell of a thrill. It’s probably a better track all around with the chicanes. Nothing is ever as good as it used to be, but all things considered it's a good little complex. I tend to like hard- braking zones. It’s good for racing.”

(Driving the car in traffic) You don’t really drive the car differently in traffic, per se, than you would any other. The No. 1 goal of course is not hitting the other car when you go by. I’m still building some situational awareness in the car of exactly where everything is. You have to drive to the width of the rear wheels. Really it isn’t that hard to figure out. It’s like any other car in that it takes some time to get used to it. There is a bit of a different style to driving this car in traffic because it doesn’t have very much torque – at 1.6 liters it’s the smallest engine in the paddock by a good bit. You have to use your momentum. So you don’t sit behind a car and wait for a moment to overtake it. You have to leave yourself some room and get on the throttle early and make sure you have momentum on your side.

(On 2012) “It’s has been a lot of fun. We have a very reliable and competitive car. We come into every weekend believing we can win races and pole positions. The team is more motivated and I am more motivated. We have good results but some races we could have won. You cannot compare last year to this year; this season has been 10 times better. I hope we can end this season on a high note with another victory. This car is a lot of fun to drive everywhere but here it is exceptionally nice. This track has a lot of high- speed corners and a very nice flow. You can really feel the downforce in the car.”

(Being back in an open-top car) “This morning when I started, I thought, ‘Whoa it’s been a long time since I’ve had this feeling.’ The last time was Sebring in 2011 (with Audi). This is a very new experience to drive a Honda, which we always fought since 2006 with the Porsche RS Spyder. This track is still very quick. For sure it was a good day and we have a good base for the race. As everyone knows, the team is very strong but 10 hours is a long race with a lot of traffic. We will keep our fingers crossed and see where we are in the end.”