Before the FIA World Endurance Championship teams take on their own series title fight this year, some of them will contest the always demanding for both machinery and drivers event: The Twelve Hours of Sebring!

It is one of North America’s oldest races, run for one turn around the clock over a punishingly bumpy 3.74 mile, 17-turn track in central Florida. Heat, dust, bumps, traffic, endurance: these are some of the reasons that competitors throughout the world of international sports car racing consider Sebring to be an ideal test of team and machine before the 24 Hours of Le Mans.

In 2013, the 61st Twelve Hours of Sebring in Florida will have a special significance for many of its competitors and among those will be some very familiar FIA World Endurance Championship faces including Audi Sport, Rebellion Racing, Greaves Motorsport and Aston Martin Racing.

Sebring... Hard and demanding for driver and machine.

Due to the impending merger of endurance racing’s two US championships, the American Le Mans Series (ALMS) and GRAND-AM, new regulations will come into force from 2014 onwards which will mean that, in the future, LMP1 cars will no longer be eligible to compete in this race.

Audi Sport has raced at the Sebring event since 1999, and indeed introduced its first LMP sports car here. It has won 10 times since its premiere and says that this weekend’s race will be an emotional experience as it wishes Sebring a fond farewell. Two Audi e-tron quattros are entered, the new generation Audi racer making its debut with a cast of familiar names: Marcel Fässler, Benoît Tréluyer, Oliver Jarvis, Lucas di Grassi, Allan McNish, Tom Kristensen.

Dr. Wolfgang Ullrich, Head of Audi Motorsport: “Sebring is a particularly hard racetrack. Hard and demanding for driver and machine – whoever survives this 12-hour race without problems is usually well equipped for every other challenge. The race will once again be the perfect dress rehearsal for the forthcoming WEC season and the 24-hour race at Le Mans.”

FIA WEC LMP1 Privateer Champions, Rebellion Racing, is also entering two of its Lola B12/60 prototypes for much the same purpose, and the Swiss team’s drivers are no less familiar to the WEC. Nicolas Prost, Nick Heidfeld, Neel Jani, Mathias Beche, Congfu ‘Frankie’ Cheng and Andrea Belicchi have all demonstrated their talents on the world stage, and will be taking the fight to Audi for the whole 12 hours at Sebring.

Greaves Motorsport has one Nissan-engined Zytek Z11SN entered in the LMP2 category, with Le Mans winner Tom Kimber-Smith in its line up alongside Christian Zugel and Eric Lux, and up against some high-level opposition in the class. 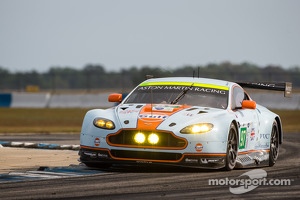 The biggest class at Sebring, and the most fiercely and closely contested at every ALMS round, is GT (in America it is referred not as GTE, but only as GT) and Aston Martin Racing will have two Vantage V8s among the 12 entries. Darren Turner, Stefan Mücke and Bruno Senna, making his debut at Sebring, will be up against factory-entered or factory-supported teams from BMW, Corvette, Ferrari, Porsche and Viper. This class is too close to predict, but it will definitely delight fans from start to finish.

Gerard Neveu, CEO of the FIA WEC, said, “We would like to wish everyone, especially the FIA WEC teams, taking part in the Twelve Hours of Sebring the very best of luck. Pierre Fillon President of the Automobile Club de l'Ouest and I, will be attending this very important race on the endurance racing calendar, which was the stage for the first ever World Endurance Championship race 12 months ago. It will serve as a good test for the start of the FIA WEC season at Silverstone on the 14 April, and it is also a good opportunity for us to continue the discussions with our North-American partners.”

Extensive programme for Maxime Martin in 2013 starts at Sebring