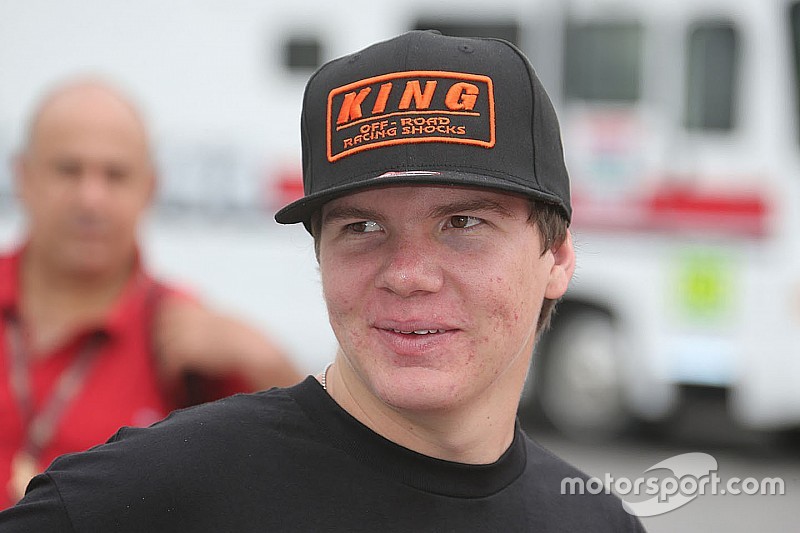 Polesitter Sheldon Creed lost his mojo in the early stages of the ARCA race at Iowa Speedway, but he never lost touch with the leaders and in the final third of the race he charged to the front and stayed there.

Creed, driving the Matthew Miller-entered Toyota, made the early break, but by Lap 15 of the 0.875-mile course, he was under fierce pressure from Michael Self’s Billy Venturini-entered Toyota.

This pressure was alleviated initially by Self having to watch his mirrors for Riley Herbst’s Coy Gibbs Toyota, as these three quickly separated themselves from the chasing pack, led by Harrison Burton.

Finally, once Self switched his attacks too the outside line, he did find a path around Creed on Lap 20 and then it was Herbst’s turn to attack the erstwhile leader. He completed the task on Lap 23… and Herbst’s charge didn’t stop there. He passed Self for the lead on Lap 38, while five seconds further back, Burton, Zane Smith (Doug Fuller Toyota) and Chandler Smith (another Venturini Toyota) demoted Creed to sixth.

Heading past one-third distance in the 150-lap race, Self held a 2sec lead over Herbst, with Burton a further 8sec down chased hard by Z. Smith and C. Smith.

Then with 60 laps down, Gus Dean struck the outside wall in Turn 2 and looed his Kevin Cywinski Chevrolet down into the inside wall. That inevitably caused a rash of pitstops, and Herbst emerged ahead of Burton, Self, Z. Smith, C.Smith and Creed. However, at the restart, running three-wide, Z. Smith and Burton moved to prominence, and on Lap 70, Herbst got loose at the bottom of the track, slid all the way up the track and was tagged by Self, into the wall and out of the race.

Self sustained some damage to his right-front fender which was taped in an unscheduled stop, and would take the restart in 12th.

Self had his second incident of the evening on Lap 81, caught out by the cars in front slowing more abruptly than he expected. Lifting off the gas got him loose and he spun across the grass on the front straight before regaining the track, but not before bringing out the yellow.

Z. Smith worked his way around Creed on the next restart, but within a few laps, the yellows flew again – David Sear had backed his Bill Kimmel Ford into the wall. Cue more pitstops, that left Graf and Braden up front in their Fords, ahead of Creed, Z. Smith, Purdy, Burton and Smith, champing at the bit to get by when the green flew at the end of Lap 100, two-thirds distance.

Creed wasted no time in hitting the front as the pack behind went four-wide, and then Z. Smith, Purdy, C. Smith and Burton pushed the Blue Oval runners out of the top five on the very next lap. Five laps later, out came the caution again – Christian Eckes’ Venturini Toyota took a ride through the grass having been shoved into a spin by Mitchell’s Chevy.

The restart with 40 laps to go saw Creed easily hold his lead over C. and Z. Smiths, Purdy and Burton. With 25 to go, Purdy and Z. Smith were running side by side and Purdy moved around the outside at Turn 1 to grab third and swiftly moved away.  Three laps later, Graf pushed past Burton to put his Ford back into the top five.

Chandler Smith held some beautiful slides while trying to catch Creed over the closing 15 laps, and with seven to go, he’d cut the gap to under 0.4sec. But despite experimenting with some imaginative inside lines, he just couldn’t get close enough to upset Creed’s equilibrium. It was a brave effort, but Creed held on to win by 0.236sec, with Purdy a further 1.2sec adrift, and Zane Smith five seconds further back, having just held off Graf’s Ford.