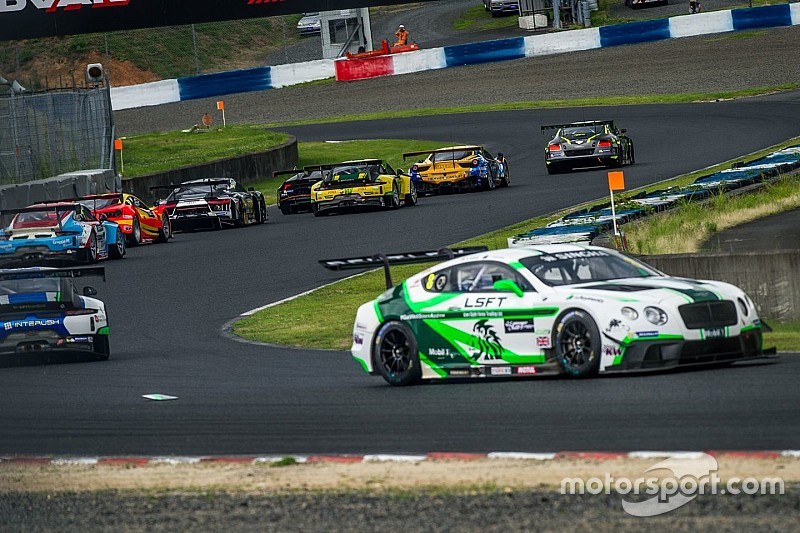 Despite there being just two races to go, there is still absolutely no guarantee of who will be standing on the top step of the championship podium at the conclusion of the 2016 Series

After what can only be described as an epic season of the GT Asia Series, the final event of the year approaches with 13 drivers, seven teams and four marques still in with a mathematical chance of outright championship victory.

So far there have been six different winning combinations across the ten races so far, and despite there being just two races to go, there is still absolutely no guarantee of who will be standing on the top step of the championship podium at the conclusion of the 2016 Series.

Last time out in Shanghai we were given another glimpse of just how close the title race has been, with 11 cars [five marques] separated by less than one second in qualifying [across a 2:05-minute lap], whilst the opening race saw three cars from three different manufacturers separated by just two tenths of a second after 60-minutes of intense racing..

Currently the championship lead is held by rising young Italian stars Edoardo Liberati and Andrea Amici from the FFF Racing Team by ACM Lamborghini operation, the two factory Lamborghini Squadra Corse junior drivers have been both fast and consistent all season, with six podium finishes to their name, but with just one round win in Fuji.

They come into the final round just nine points clear of two-time 2016 winners Anthony Liu and Davide Rizzo, the two Ferrari drivers have immense experience at home in Shanghai, and were winners last time out at the Chinese Formula One venue.

Just 14 points back, is another team that has been quietly going about their business since the start of the season. Led by Thailand’s Vutthikorn Inthrapuvasak, the #9 Bentley Team Absolute machine has been on the podium four times this season, and every one of those starts has seen Englishman Duncan Tappy in the co-pilot’s seat.

Vutthikorn started the season alongside American Andrew Palmer before an accident at home in the US sidelined the rising young Absolute Racing star. That saw 2015 GT Asia race-winner Tappy drafted back into the equation to put the #9 car on the podium for both races in Thailand, before German Bentley factory driver Christer Jons took over the wheel. Sadly for Jons a less than ideal event at Okayama saw Tappy back for Fuji, and for Shanghai where the Englishman again assisted Vutthikorn to back-to-back podiums. Vutthikorn is a long-shot for championship victory, however one slip by the leading teams, and just like recent years, it could all come down to the final race of the year..

The Bentley Team Absolute operation too will have their hands full in the title chase, with 2015 GT Asia Series runner-up Adderly Fong and team-mate Andrew Kim just four points back from Vutthikorn, whilst three-time 2016 winner Jonathan Venter is just a solitary point behind them. Venter’s team-mate Keita Sawa too is within mathematical reach of the title, and is just seven points back from Venter after missing a round to compete in the 2016 Le Mans 24 Hour race, but at 35-points behind the points leaders, he’d need a minor miracle to claim the crown, but could be more than instrumental in assisting team-mate Venter to victory, especially as they too were winners last time out at Shanghai.

Separating the Bentley teams on the points table are two-time 2016 winners Marchy Lee and Shaun Thong. Campaigning the brilliant gold AAPE by Bathing Ape Audi R8 LMS GT3 for Lee’s Phoenix Racing Asia outfit, they sit just 25 points behind the points leading Lamborghini, but importantly they showed at Shanghai last time out that the Audi was the car to beat. Sadly for them, a broken gearbox in qualifying saw them start last in both races, but they completed the round with a fourth and fifth placed finish, and were regularly the fastest car on the circuit - an ominous sign perhaps for the points leaders.

For the outright leaders though, their job will be to maintain their consistency, whilst for Liu and Rizzo they need to go on maximum attack, but they have shown over the last three seasons in Shanghai, that they’re up to the challenge. That said, so too are the FFF duo, who last time out matched the local stars on points with 25 apiece - under those conditions, Liberati and Amici would become the 2016 champions..

The key however might be team-mates, and whilst neither team has publicly declared they will include a second team to the entry list, both have already shown over the last two seasons that they are prepared to add a second car - BBT in 2015 at Shanghai with Max Wiser and Jiang Xin, whilst last time out FFF drafted in Squadra Corse factory stars Jeroen Mul and Richard Antinucci. The result of that second Lamborghini was a comfortable podium finish for Liberati and Amici in race two, whilst Liu and Rizzo were forced to use up their tyres early trying to get around the #15 entry, before fading to a tenth placed finish. They won’t make that mistake a second time..

Just as it did in 2015 - and for that matter, every season prior - the final round will provide plenty of action and intrigue, and if there’s one thing that can be guaranteed, that’s the fact that the title race will go all the way down to the wire, with no quarter given..! Don’t miss this one, it will be memorable!