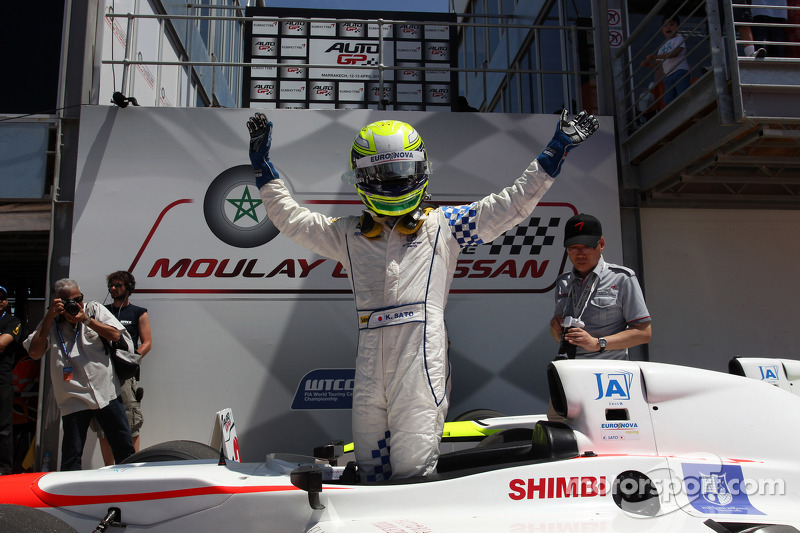 The Japanese race won what turned out to be an elimination race in front of first-time podium runners Michele La Rosa and Giuseppe Cipriani.

The opening race of the 2014 Auto GP season featured a spectacular win by Kimiya Sato (Euronova Racing) at Marrakech in Morocco. The Japanese racer, who ended as the series' runner-up in 2013 and is currently committed to a season in GP2, won what turned out to be an elimination race in front of first-time podium runners Michele La Rosa (MLR71 by Euronova) and Giuseppe Cipriani (Ibiza Racing Team).

At the start, Markus Pommer (Super Nova), who was taking-off from the front row, stalled and let Eurotech's Kevin Giovesi go from the pole. Zele Racing's Tamas Pal Kiss and Sergio Campana were second and third from Sato, Andrea Roda (Virtuosi UK) and La Rosa.

On lap 7, Giovesi and Pal Kiss made contact and had to retire (the Italian will be penalized 10 places on tomorrow's grid). With the safety-car making its way in, Sato was the leader and he also retained the spot after pitting together with Roda and Campana. Unfortunately Campana stalled at his pitbox, but after the re-start, with Sato increasing his margin on Roda and Pommer, things got even worse for him as he touched the wall and retired.

Pommer then tried to move on Roda but spun off, losing positions. In the closing stages, some mistakes by Sato enabled Roda to recover but in a late comeback attempt, the Como-based driver lost braking point and hit the barriers.

So Sato won the race in front of La Rosa e Cipriani. After having been slowed down by traffic in qualifying, Michela Cerruti (Super Nova) completed a good recovery in fourth. A misunderstanding during the safety car condition meant the drivers following Sam Dejonghe (Virtuosi UK) reached the finish more than one minute back. Loris Spinelli (Ibiza Racing Team) took 6th behind the Belgian but was off to a positive debut with the 550-hp Auto GP car and the Marrakech street course. Roda and Pommer will share the front row in Race 2.