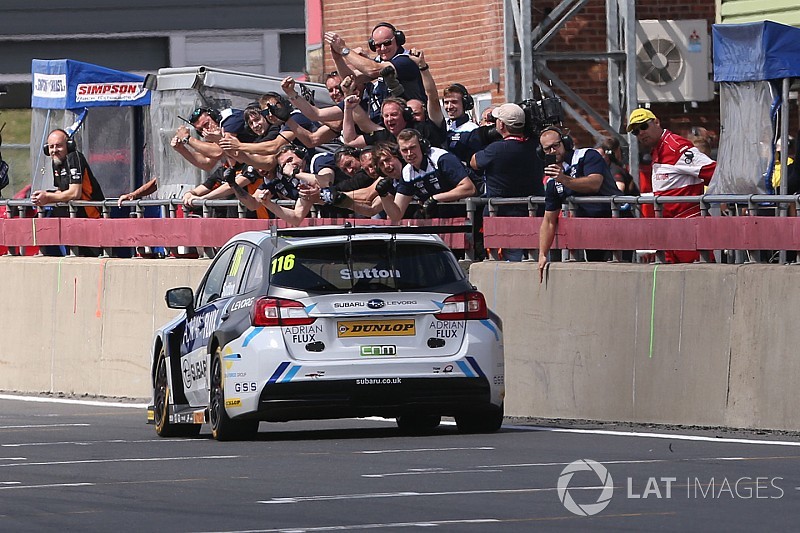 Ash Sutton assumed the lead of the British Touring Car Championship drivers’ standings with a commanding second win from as many races at Snetterton.

Team BMR Subaru driver Sutton converted his pole into a first-corner lead and was never headed as he cantered to the fifth victory of his BTCC career.

As such, he now leads the championship standings by six points over Colin Turkington.

While he held his lead when the lights went out, Sutton was stalked closely through Riches by the fast-starting WSR BMW of Andrew Jordan, who had lined up fourth.

As Jordan followed the leader around the Wilson hairpin, Sutton’s Subaru teammate Jason Plato – who himself had climbed to third from fifth on the grid – went deeper into the corner and was alongside Jordan on the exit.

Plato hung around the outside but his front-right corner made contact with Jordan’s left-rear, putting the pair onto the grass.

That allowed second-palce starter Jack Goff to reclaim the position, as Jordan rejoined in third and Plato dropped into the midfield.

A safety car then neutralised the field after Stewart Lines – returning to the grid – stopped on the exit of Murrays, having made contact with the MG of Josh Cook.

Sutton bolted on the subsequent restart at the end of lap four, and while Goff gave chase in the early laps, he began to fall away from the leader as he came under increasing pressure from the chasing BMWs.

Sutton crossed the line the best part of three seconds clear to claim his second win at the Norfolk circuit, and now has a six-point lead at the head of the drivers’ standings.

His eventual winning margin was from the WSR BMW of Turkington, who advanced from seventh on the grid.

Goff had been holding on to second valiantly and survived an attack from Jordan, who dropped behind teammates Rob Collard and Turkington as a result.

Collard was the man to eventually make Goff crack, after nudging a gap on the approach to the long right-hander of Coram and squeezed into second before Murrays, with Turkington following him through.

But Turkington ended up the best-placed of the BMWs after clearing Collard at the end of the Bentley Straight and into Nelson, with Collard suggesting he had a misfire while changing gear before the move.

Mat Jackson sliced his way through the field to claim fourth in his Motorbase Ford Focus, having also made his way past eventual fifth-place finisher Goff.

Jordan slipped back as far as seventh but fought his way back past the leading factory Honda Civic of Gordon Shedden before the flag to claim sixth ahead of the erstwhile championship leader.

James Cole finished eighth in his Team BMR Subaru Levorg, and will start the reversed-grid third race from pole.