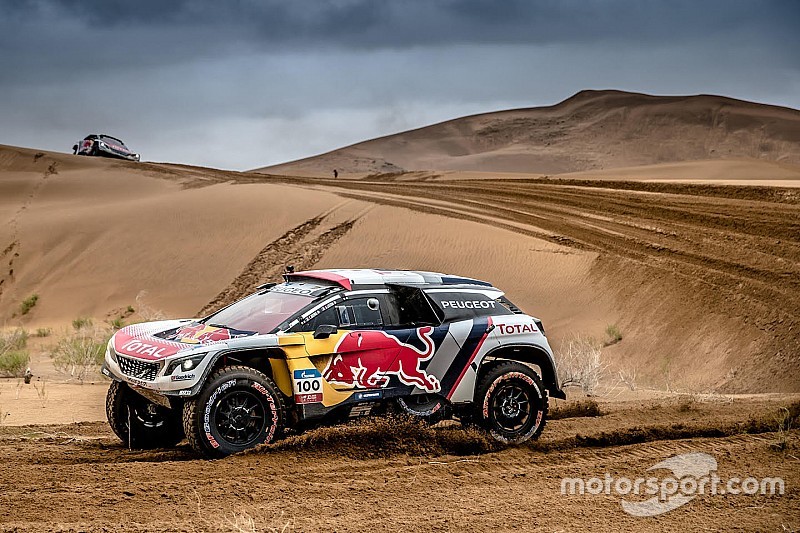 Peugeot driver Cyril Despres is set to win the Silk Way Rally for the second time after the Russo-Chinese event's final stage was cancelled.

Former Dakar Rally bikes champion Despres had controlled the event since teammate Sebastien Loeb crashed out of a healthy lead on Monday's ninth stage and injured his wrist.

Loeb had been entrusted with the sole example of Peugeot's all-new 3008DKR Maxi, with which it will attempt to win its third successive Dakar next January.

That left Despres, driving the old-generation 3008DKR, with a 44-minute advantage over Geely's Han Wei, an advantage he gradually stretched to 1h04m by the end of Friday's penultimate stage.

It was then announced on Friday evening that the competitive section of the final stage of the event, a 100km dash preceding a long liaison section to the finish in Xi'An, would be cancelled due to poor weather conditions.

Assuming they complete Saturday's liaison without issues, Despres and co-driver David Castera will be declared the winners of the event, the duo defending the title they first won in 2016.

Wei was beaten to second place overall by Dakar veteran Christian Laveille, who turned a three-minute deficit into a seven-minute advantage on Friday's stage in his BAIC BJ40L.

The best of X-Raid Mini's drivers, Bryce Menzies, had started the final day in fourth overall, but plummeted to ninth after losing almost three hours stuck in sand dunes.

The American's misfortune promoted Ford driver Eugenio Amos to fourth, followed by the second Peugeot 3008DKR of Stephane Peterhansel, who rolled out of contention for victory in the opening week but won three of the final five stages to recover to fifth.

Another potential challenger for outright honours, X-Raid's Yazeed Al Rajhi, saw his challenge melt away on only the second day of the event as he got stuck in a two-metre deep hole. He eventually finished 10th.

In the truck category, Dmitry Sotnikov took honours by only six minutes from Kamaz teammate Anton Shibalov. Ayrat Mardeev, another Kamaz driver, was third, 23 minutes down.

Silk Way Rally: Despres and Sotnikov at the gates of Xi’an