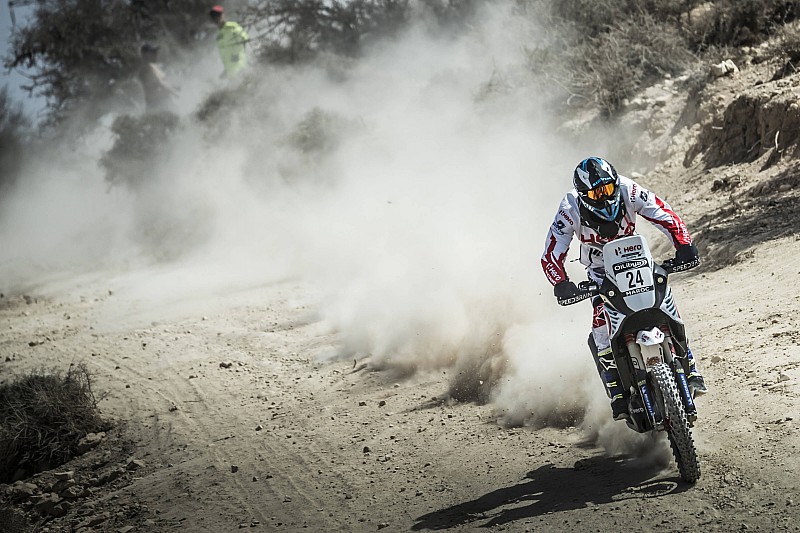 Hero rider CS Santosh and TVS Sherco’s Aravind KP ended inside the top 35 after the conclusion of the first day of Oilibya Rally in Morocco, with the Indo-French team's Joan Pedrero as the lead rider among the two teams.

Called the Loop of Agadir, the opening stage of rally was 120 km long and mostly ran along the coastal area of Morocco. It was divided into two sub-stages of roughly the same size.

On his 450cc Hero Speedbrain machinery, Santosh set the 31st fastest time in both Stage 1A and 1B, taking his total time to 1hr58m37s.

"The whole stage was really fast,’’ he said. “The first part was kind of difficult in the sand. I took my time getting used to it and made no navigational errors.”

“I did my own thing and overall it was a good day. I got into the feeling of the rally. Tomorrow we have the first part of the marathon stage, looking forward to that."

Meanwhile, Aravind in the TVS Sherco, moved up to 32nd with a time of 2hr00m04s, having made major progress in Stage 1B. He was classified 41st in yesterday’s six km prologue.

Elsewhere, Joaquim Rodrigues, the second Hero rider, finished 25th after crashing and damaging his roadbook in the dunes.

"Today's stage wasn't the best for me," he said. "I had a crash at the beginning in the sand and broke my roadbook so I had to use it manually. I was losing a lot of time.

“Then I lost my way twice. The second part I couldn't go as quick as I wanted because of that roadbook problem.

"There was a lot of dust and the guys behind started catching me. Not much I could do, really. I tried not to crash again and bring the bike home.”

Among the two Indian teams, TVS Sherco took charge with Pedrero at eighth, just over five minutes behind Price.

Up ahead, with Price heading the timesheet, Kevin Benavides in his Honda was 1m06s behind in second, with KTM's Sam Sunderland third.