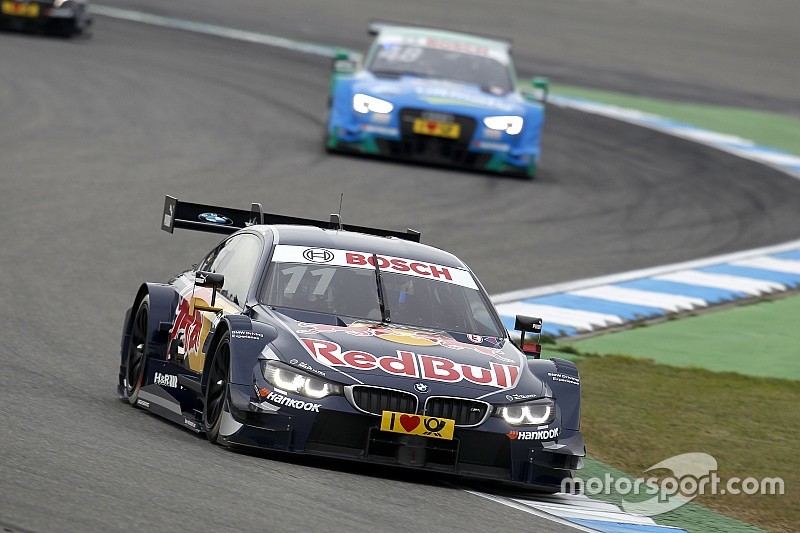 DTM championship leader Marco Wittmann extended his advantage at the top of the standings heading into the season finale, as Miguel Molina won the Saturday race at Hockenheim.

Wittmann entered the race with a 14-point lead over Mortara, needing to gain 12 points on his Italian rival to clinch the title with one race to spare.

At one point in the race, he was in position to do just that, but a heroic drive from Mortara kept the title battle alive heading into Sunday.

As Molina passed poleman Antonio Felix da Costa off the line, Wittmann just held on to fourth, with BMW stablemate Maxime Martin backing out of a move on the championship and losing a number of places.

Among those to pass Martin was Mortara, who moved up to seventh as a result, but the Italian was then demoted to eighth at Sachs with a forceful move from Timo Glock, the duo making contact on corner exit.

Wittmann, meanwhile, was waved through by Tom Blomqvist at the hairpin, settling into third place.

Da Costa, racing in his final weekend in DTM, tried to put pressure on race leader Molina during the opening stint, but eventually slowed up to allow Wittmann through into second.

At that point, even with Molina checking out up ahead, Wittmann was heading towards an early title confirmation - but a crucial four-lap stint from Mortara in the middle of the race kept his title hopes alive.

As Glock looked down the inside of fellow BMW driver Augusto Farfus into the hairpin and then ducked back in behind his teammate, Mortara divebombed Glock for P7 and emerged ahead.

He then eased past Farfus on the next lap and was through on Audi stablemate Mike Rockenfeller on lap 17 as Rockenfeller was battling Blomqvist.

The Anglo-Swede fell by the wayside on approach to the hairpin on lap 18, with Mortara taking over in fourth.

He then made massive inroads into da Costa's advantage, arriving at the back of the Portuguese driver in the closing stages, with Wittmann just ahead.

With a minute left on the clock, Mortara pulled off an audacious hairpin overtake on da Costa to step onto the podium.

But Wittmann remained ahead until the chequered flag, taking a 17-point lead into the Sunday race, with 25 points available.

Crossing the finish line, Mortara went on the radio to say: "We're the only ones who deserve this championship."

Behind him, da Costa took fourth in his penultimate DTM race, ahead of Rockenfeller and Mattias Ekstrom stand-in Rene Rast, the prototype ace banking his first points in the series in his second start.

Glock was seventh, ahead of Jamie Green, who had entered the round with an outside chance at the title and was duly eliminated from contention.

Blomqvist wound up ninth, while Paul di Resta scored Mercedes' only point of the day.