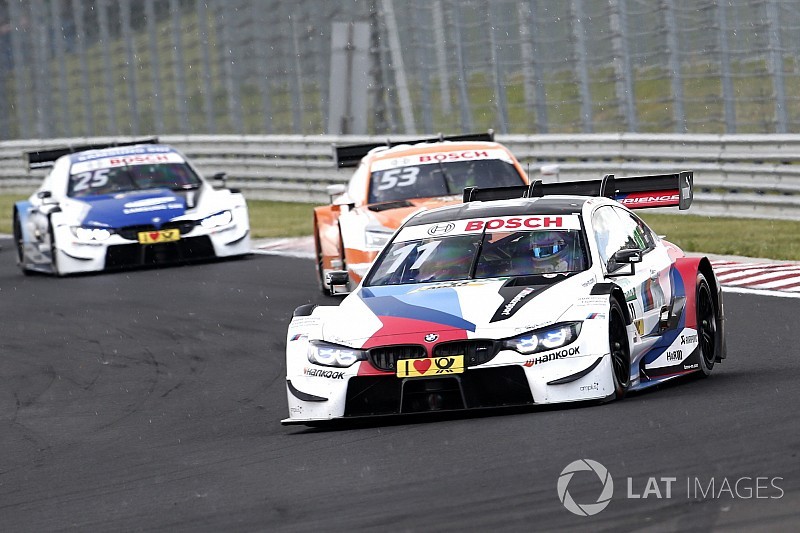 Light rain started falling on track shortly after the start but, with conditions not changing drastically, the majority of the field decided to stay out on slicks.

However as the rain increased, Lucas Auer dived into the pits where conditions were already too wet. He couldn't stop his Mercedes as he slid and hit the pit building, as well as a couple of marshals.

As two ambulances arrived in the pitlane, the race was subsequently red-flagged.

A statement from DTM during the red-flag period said: "An injured marshal has severe leg injuries. Two further people have medium-level injuries.

"None of the injured people is in critical condition, they are all being transported to hospital."

After the start, polesitter Auer led an all-Mercedes top six, but he was overtaken by Pascal Wehrlein as track conditions became greasy.

With Auer, Paul di Resta and Mortara pitting while it was raining, the other three Mercedes cars of Wehrlein, Gary Paffett and Daniel Juncadella led the race after the red flag.

He was overtaken by Juncadella at Turn 1 and continuously lost positions, running as low as 17th a lap later and soon pitting.

Paffett's woes allowed Wehrlein to lead with a comfortable gap, but Juncadella rapidly closed in and made a move at Turn 1.

The duo were followed by Nico Muller and Jamie Green, the last drivers to pit, with Philipp Eng leading three of his BMW teammates: Wittmann, Timo Glock and Joel Eriksson.

Juncadella built a 2.8s lead when he pitted with eight minutes left on the clock but could only rejoin 17th due to a sluggish stop.

When all the stops panned out, Wittmann, having passed Eng, took over the lead.

The two-time champion eventually crossed the finish line first to take his first win of the season with Glock taking second, having been sent into a spin by Muller at the start and running last.

With Paffett finishing last, Glock reclaimed the championship lead with an 11-point gap.

Eng completed an all-BMW podium, as he held off a late charge from Mike Rockenfeller.

A rapid di Resta gained several positions late on to take fifth ahead of the BMWs of Eriksson, Spengler and Augusto Farfus. Auer had to settle for ninth ahead of Mortara.

UPDATE: Auer, Mortara and Spengler, the three drivers involved in the pit incidents, were all excluded from the final classification.

The accidents were found to be an infringement of article 30.9 of the regulations, which states: "The driver must reduce speed as soon as he joins the deceleration zone so that he can stop his car at the pits without endangering other participants or the marshals."

All three drivers lost a top 10 finish as a result, with Spengler finishing seventh and Auer and Mortara completing the top 10.

In addition, Mortara and Spengler both have a suspended 10-place grid penalty for the next two rounds as they crashed despite being warned on radio and yellow flags being shown in the pitlane.