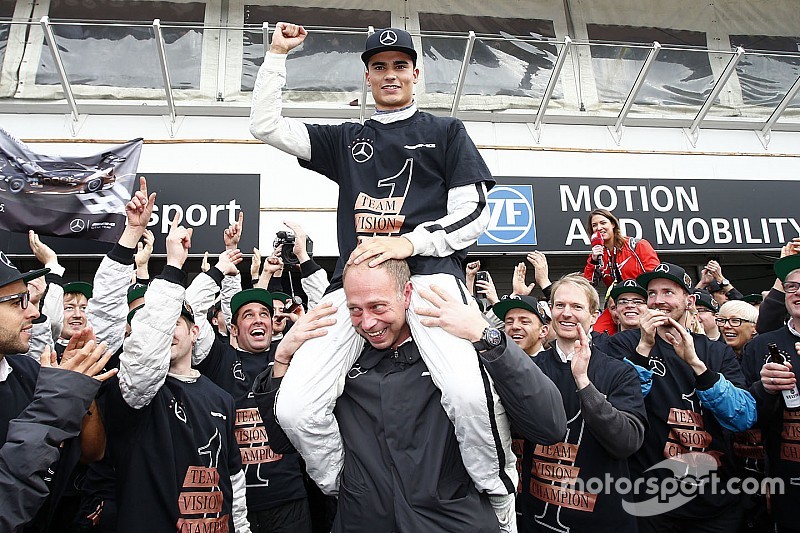 Pascal Wehrlein became the youngest-ever DTM champion at Hockenheim on Saturday, winning the title with a race to spare after a charging drive from a lowly grid spot.

Wehrlein, who turns 21 tomorrow, takes an unassailable lead of 40 points over Audi’s Mattias Ekstrom going into Sunday’s final round.

The Mercedes driver won the championship after a charging drive from 13th on the grid to eighth in race one at Hockenheim. It is the manufacturer's first DTM drivers' title since Paul di Resta in 2010.

After the race, Wehrlein added: “We worked so hard the whole year, we came here with a big gap, but still with 50 points [available] so if everything went wrong and they win the races, we’d lose the championship.

“Qualifying wasn’t perfect, I missed the pole by two-tenths and I was P13, that was really surprising to me.

“At the end I improved to P8, so everything is good. I knew I had a good car, I had good speed in the race to improve positions. I could catch the other guys in front of me.

“There’s so much pressure on you, so many people at the track and the factory working for you, and it’s been a long time since we won this championship, so the whole team deserves it. I’m very thankful."

The championship took a massive turn when Ekstrom was passed by Wehrlein, but bumped into the rear of him at Turn 2 and was then tagged into a spin by the Mercedes of Robert Wickens.

After his spin, Ekstrom battled back to ninth place, to pass teammate Edoardo Mortara in the points, but it wasn’t enough to keep his title hopes alive.

Audi’s Mortara, who had entered the race second in the championship, suffered a puncture after contact with fellow Audi driver Miguel Molina.

After a second clash, with BMW’s Timo Glock, he was forced to retire.

Mortara said: “For sure it was not the best day. I had contact with Miguel, with a teammate makes it that bit more bitter.

“I did a mistake with Timo and I spun him. It was a complete race to forget.”