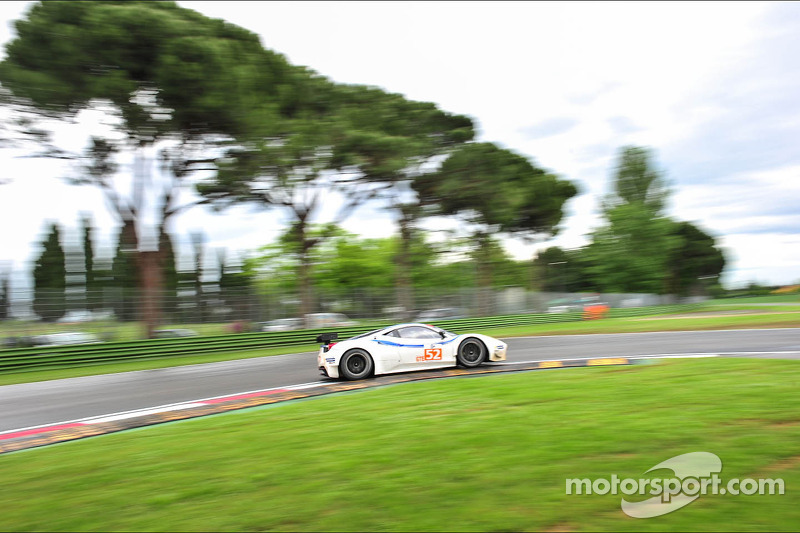 The 3 Hours of Imola saw a home win for Ferrari in both the LMGTE and GTC classes with the nr52 RAM Racing 458 Italia of Matt Griffin and Johnny Mowlem taking a lights to flag win in LMGTE and the nr69 SMP Racing Ferrari 458 Italia GT3 of Fabio Babini, Viktor Shaitar and Kirill Ladygin taking the GTC class win for the Russian team on their debut in the European Le Mans Series.

Matt Griffin took the start from Pole Position in the RAM Racing Ferrari but soon had the nr67 IMSA Performance MATMUT Porsche of Patrick Long challenging for the class lead. For lap after lap the two cars were split by the slimmest of margins but Griffin was able to hold onto his lead from the American driver.

Peter Kox in the nr60 Kox Racing Lamborghini also got a good start at the head of the GTC grid and was able to pull out a comfortable gap to the nr62 AF Corse Ferrari of Stefano Gai. The Dutch driver maintained his lead right up to the first pitstop when he handed over to Nico Pronk.

Meanwhile the first hour was completed and the nr52 Ferrari and the nr67 Porsche were still fighting over the lead with Griffin still able to hold position. As the pitstops approached the Ferrari visibly slowed and Long swept past to take the lead. It turned out that the Ferrari was short of fuel so Griffin slowed to make sure he reached the pitstops. Long came in first to hand over to Patrice Milesi, while Griffin made it back to the pits and elected to stay in the car for the next hour. This shortened the pitstop and allowed the Ferrari to rejoin the track at the head of the LMGTE grid.

The nr75 Prospeed Competition Porsche of Sebastien Crubile had to limp back to the pits with a broken front suspension which caused the car to retire in the team’s garage.

The nr69 SMP Ferrari of Viktor Shaitar was now leading the GTC class as the nr60 Lamborghini lost ground as the nr62 AF Corse Ferrari and the nr68 SMP Racing 458 moved up the field. The nr79 Ecurie Ecosse BMW Z4 also started to make progress, which would ultimately see Ollie Millroy secure a podium finish for the Scottish team.

After the second pitstop when Griffin handed over to Mowlem, it looked like that RAM Racing was heading for a 1-2 finish. However Frank Montecalvo in the nr53 458 ran wide into the gravel and it took time to regain the track, allowing AF Corse Ferrari of Marco Cioci to move up a place.

It was also a one lap victory for the nr69 SMP Racing Ferrari as Fabio Babini took the chequered flag ahead of the nr62 AF Corse 458 of Lorenzo Case and a further two laps ahead of the Ecurie Ecosse BMW, the only car to upset the Ferrari domination of the 3 Hours of Imola.

Johnny Mowlem and Matt Griffin now have a 10 point advantage in the driver’s championship ahead of Round 1 winners Christian Ried and Gianluca Roda, who finished in 5th place today. In the LMGTE Teams Trophy RAM Racing also enjoy a 10 point advantage over Proton Competition.

Matt Griffin Nr52 RAM Racing Ferrari 458 Italia “We were pushing the envelope with the fuel a bit in order to match the Porsche’s fuel economy, and the car coughed a bit so I had to come off the throttle and nurse it round for my scheduled stop. I switched the engine map, watched Pat drive away from me but we were always planning to stop at that stage anyway. We had some fantastic Michelin tyres this weekend and that allowed us to follow the strategy we did, although the rears were going off a bit towards the end. It was a great result though, coming after pole position this morning, and it might take a while to wipe the smile from my face tonight!”

Johnny Mowlem Nr52 RAM Racing Ferrari 458 Italia “For Ram Racing it’s a brilliant result to have achieved what they have in such a short period of time and to come here and effectively smash everyone else, including fantastic teams like AF Corse, is wonderful. Matt here made my job very, very easy and he did a great job keeping us ahead all the way. The car was unbelievable, especially the tyres as we were able to main the pace in the second stint just as well as in the first. The ELMS has some very strong opposition here and it’s great to be able to beat them all today.”

Two out of two in qualifying for Jota Sport at Imola

Victory in Imola for Thiriet by TDS Racing