Spa: An interesting race that offers a unique challenge 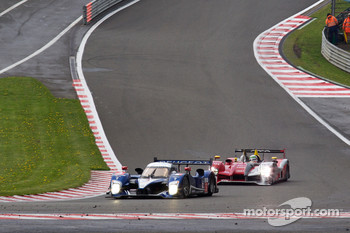 On the 5th to 7th of May 2011, the engines will roar again at the very famous Spa Francorchamps circuit. This almost 7 kilometers long track featuring some of the world's most well known curves like the hairpin of La Source, the breathtaking combination of Eau Rouge/Raidillion leading to the long Kemmel straight and even the famous bus stop chicane which was a few years back, unfortunately for many fans and even some drivers, was slightly modified.

Over the years, Spa has mostly been offering some great racing, often thanks to its characteristic where at one side of the track it can rain very hard while at the other side of the track it can be completely dry. Last year the weather caused some trouble for the teams and the start was quite tricky, even destroying the hopes of winning by some of the race favourites. Also this year, the weather may cause a few shocks as the Belgium weather predictions for the race weekend are showing some hard rain but also some sunny skies.

LMP1: The first true battle between the new cars of Audi and Peugeot

While the Le Mans Series entry shows a good amount of LMP1 cars will take part -- 14 in all -- the main story of the weekend will still be the ongoing fight between Audi and Peugeot. Audi Sport, who took the first battle of the new prototypes against over the the Peugeot Sport teams by taking the fastest time at the official Le Mans test day, will bring all three cars to the race of Spa. Peugeot instead will start the race with four cars, 3 being new spec factory 908s by the factory team. The fourth Peugeot is the older 908 HDI-FAP and is entered by Team ORECA Matmut, winner earlier this year of the 12 hours of Sebring race and therefore the leader after round 1 in the Intercontinental Le Mans Cup (ILMC) standings.

After the news of the withdrawal of Aston Martin Racing for this event, the main challengers can be found from the fastest petrol cars and the top teams of LMS. Pescarolo Sport, the winner of round 1 at Le Castellet after sitting out a year, and past from the Spa race must surely give them a lot of confidence. Also the #2 car team of Rebellion Racing is looking to make a strong outing. Last year in the rain, they were putting some impressive laps on the board and were challenging the Audi and Peugeot teams until the track started to dry. In the end the many petrol cars could fight even for the overall win if it's raining.

The all new hybrids

Adding to the entries at Spa, there will be a LMP1 Hybrid entry. MIK Corse and its Zytek 09 Hybrid driven by Maximo Cortes, Ferdinando Geri and Giacomo Piccini. In the long run, Hybrids are a very possible way for the future at many forms of motorsport including sportscars and some of the manufacturers has already shown great interest to use Hybrids in their next motorsport projects.

LMP2: Could be anybody who takes the victory 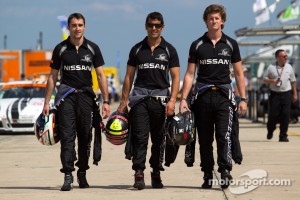 In LMP2 there are no clear favourites this time but the strong field of 12 cars will surely give quite a nice pre-match and great preparing for the teams who are entered for the upcoming Le Mans 24 hours race at next month. Even when there really is not clear favourites, the Oreca 03s of Signatech Nissan, TDS Racing, Boutsen Energy Racing and Race Performance are expected to be strong runners, especially during the qualifying where the Oreca's has been shining each time so far during this year.

Signatech Nissan with their Oreca 03-Nissan driven by Franck Mailleux, Lucas Ordonez and Soheil Ayari has been very dominant at most of the sessions this year including a win and maximum points at the Sebring 12 hours race for the ILMC championship. Signatech Nissan was also the fastest LMP2 car during the official Le Mans Test, few weeks ago.

For other than Orecas, the LMS championship leaders Greaves Motorsport with their Zytek Z11SN-Nissan, Pecom Racing with their Lola B11/40 and HPD's lead by RML, Strakka Racing and Level 5 Motorsports will surely be strong once more due to their strong and very professional driver line-ups.

FLM: 5 teams to go for the win of FLM class

FLM this year doesn't seem to get high numbers of teams for the grid -- partially due to the fact the teams have and no doubt will move up a class -- but as in past seasons, the class always been provided some good racing. The cars are fast and have a good change to upset some of the LMP2 cars. Unfortunately the class has mostly been claimed as very unreliable, most of the teams spending a lot of time in the pits instead of racing and therefore having a huge impact for the race results. This fact has also mostly kept the championship alive to the last races of the season.

As to the main favourites to win the race, it's expected to be a close match with Hope Racing, Genoa Racing and Neil Garner Motorsports. These three teams were already very closely matched at the LMS season opener but are still looking their first class wins this season. Pegasus Racing took the surprising win at 6 hours of Le Castellet and going into round 2 as the championship leaders. JMB Racing is the 5th and last class entry for the Spa 1000 km race.

A rise of the BMW Motorsport has been the story of the year so far in LMGTE Pro. After winning the season opener of sportscars at one of the most followed races in the world, the 12 hours of Sebring, BMW managed to beat their rivals for the 2nd time at the ALMS round of Long Beach showing to everybody that the car has taking a significant step to once more, eventually, become a great all-a-rounder as the car to beat this season. BMW Motorsport will enter two cars in the race of Spa. Number 55 M3 will be driven by Jorg Muller and Augusto Farfus while the sister car number 56 will be driven by Andy Priaux and the very experienced Uwe Alzen.

Despite most of the American Le Mans teams not taking part for the race, BMW will find a tough challenge once more from the Ferraris and Porsches lead by two very strong entries. AF Corse will enter two Ferrari F458 Italia cars with the #51 driven by Giancarlo Fisichella and Gianmaria Bruni and #71 car of Jaime Melo and Toni Vilander. Other notable Ferrari entries will come from the LMS championship leading JMW Motorsport team and Hankook Team Farnbacher which by the entry list will surprisingly enter one of the older F430GTs to the race. 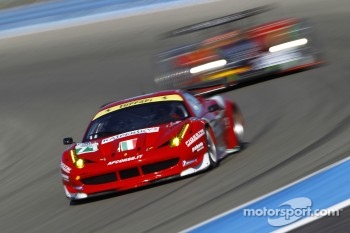 Porsche is well represented, this time with 3 crews all using 911 RSRs (997) and all with very capable crews to win the overall GT battle. IMSA Performance Matmut, Team Felbermayer Proton and ProSpeed Competition are all looking for revenge after facing a disaster at the LMS opener at the Paul Ricard circuit where their cars were heavily damaged due to the race start miscue with safety car still on track and therefore them didn't had full potential to achieve a good result.

The rest of the field

The rest of the field will also be very interesting. The French Luxury Racing will enter two Ferrari F458 Italias with very well known sportscar drivers. The team has made a decision to only run the Ferraris and despite being quite new in the sportscar racing, they have managed to do some great results already at the national championship level. The another interesting entries will be the Lotus Evora's entered by the Lotus Jetalliance team but the car is just on its development pace and at the official Le Mans test were outpaced. The cars still have a lot of potential by the team so only the time will tell if the project will be successful.

LMGTE AM is very interesting also despite most of these cars not gaining to much attention due to running at the back of the field. The cars have to be older spec ones and one of the drivers must be what many consider a gentleman driver (a non-pro driver) or a novice. The other(s) drivers can be platinum/gold. Despite all this, the class has proven already to be very competitive offering a chance for many teams to run second squads with younger, upcoming stars plus allow businessman -- even team owners -- to compete.

This time, the race itself will not be just Porsche vs Ferrari since Larbre Competition will bring its Chevrolet Corvette C6-ZR1 to the grid. The car what was topping the charts at the Le Mans Test but it was driven there by the ALMS Corvette Racing team drivers. At Spa, the team's normal crew of Patrick Bornhauser, Julien Canal and Gabriele Gardel will be behind the wheel. The another non Ferrari vs Porsche entry will be the Aston Martin Vantage of Gulf AMR Middle East team. The Aston Martin unfortunately, still isn't as one of the quickest cars of the class but on the right day it's very capable of pulling out a good result. Also the car is quite reliable which is a plus for the longer endurance races. 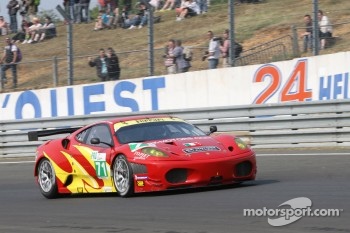 Special mention goes to, yeah you knew it, Michael Waltrip

Michael Waltrip, 2001 and 2003 Daytona 500 winner, current NASCAR driver and co-owner of Michael Waltrip Racing was already present at the Official Le Mans test. Waltrip, who is driving the AF Corse number 72 Ferrari F430 during the Le Mans Test was said to be very excited about the change to drive at Le Mans but also said that "... it's not so different to turn the wheel to the another side as well from time to time". NASCAR Sprint Cup Series and their two ladder series do compete on a few road course events each year. It will be interesting to see how well his debut at the Spa-Francorchamps goes. In the end, Spa is kept as a very demanding and especially as a drivers track and a beast to master, especially at very likely wet weather.

The AMR-One LMP1 will not race at Spa