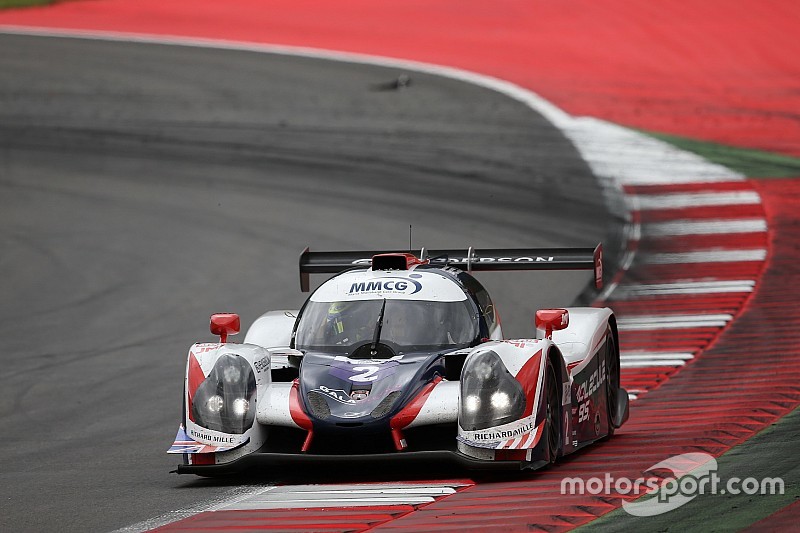 A nine week break in the six-race series seemingly had no detrimental effect on a United Autosports team that is competing in ELMS and the LMP3 category for the first time. Having placed first and second (Silverstone) and first and seventh (Imola), a fourth podium of the season in Austria today earns the UK-based squad a healthy 33-points lead in the Teams’ standings at the mid-stage of the championship.

United’s #3 and #2 Ligiers lined-up second and eighth on the 38-car grid respectively, Boyd and Brundle having secured the grid spots the previous day in the 10 minute qualifying session around the sweeping 2.69-mile circuit situated in the Styrian foothills – with Alex’s father, Martin, an interested spectator.

The #3 and #2 Ligiers suffered massively varying fortunes in the opening 15 minutes with Brundle in the #2 charging through to second while Patterson, having briefly led at turn one, pitted with a punctured right tyre after contact from a car behind on lap two dropping Mark to 19th and last in the LMP3 category. Further vital time was lost when Patterson pitted the #3 again on 45 minutes to have rear bodywork repairs made – a legacy of the flaying tyre carcass earlier.

Brundle pitted from second place with just short of an hour on the clock, Guasch taking over, Patterson handing over the #3 Ligier to Bell placed 17th just after mid-distance, while Guasch handed over the #2 car to England. Boyd took over from Bell 14th with less than an hour to run. With 30 minutes to go following a Full Course Yellow, Christian was just 10 seconds off the LMP3 class lead, eventually taking second place just 3.458 seconds behind the winner with Boyd bringing the “sister” car home an unrepresentative 14th. But a Stewards Decision late on Sunday evening handed the winning car a four-second penalty promoting United Autosports to the No1 spot.

The fourth race in the series is staged at Paul Ricard in France on 28 August.

“What a fantastic day. We knew that it was going to be very, very tight here and you can’t really grind out that much of an advantage, so we knew that we had to do everything perfectly. Mike Guasch drove an awesome stint in the middle of the race, but both my co drivers kept the car out of trouble, which is exactly what we needed to do. The team worked so well, the pit stops were spot on and everything went smoothly. My first lap was interesting. I’ve had a lot of experience in starting sportscar races so I put that knowledge to good use today to get myself up to what really should have been our qualifying position. Looking forward to the next one now.”

“The race was good but it felt like a long race. What a fantastic result for our car and for the championship too. On paper, this could have been our worst race, so we were a little bit worried with it being such a short lap and the competition being so close. If you’d have asked us at the start of the weekend what we’d have been happy with, we would have said top five, so to come away with a win is amazing.”

“We did some testing before coming here and we felt positive. Between the two cars we had a good chance of getting on the podium. During the race Alex, Christian and I just kept our heads down and did our thing and we are happy with the result. A third win out of three races is pretty good going!”

“If it wasn’t for bad luck, we wouldn’t have any luck at all. It appears that Mark got hit from behind on the second lap and part of the bodywork punctured the tyre so we had to pit. Then the officials wanted us t fix some broken bodywork caused by the puncture so we had to pit again to fix that. It was more or less game over within the first five minutes of the race. In those situations, it’s quite easy to give up, but the effort and work from the team to get Mark back out again after changing a whole section of rear bodywork was fantastic. We managed to make up five places after being five or six laps down so the pace looked good. I think if we get chance, we can be competitive - we can just walk away happy with the job we all did and see what happens next time.”

“We had a really good weekend up until the race. Practice went well, and so did qualifying for me - if I’d not made a slight mistake, it might have been pole, but I managed to get Mark on the front row for the start of the race and he did a really good job. Unfortunately he got hit from behind, which caused a puncture, but we will move on to the next race and hopefully try and win it.”

“Great track, we love this place and we know how to drive quickly here. Our set up was one notch away from perfect and we ran hard but I got hit from behind, which meant the bodywork damage we sustained caused a puncture, which essentially took the race away. We ended up only five laps down by the end, which on a short track like this shows very efficient work by the team - great work on their part. We could easily have been top five I think by the end of the race, but sadly not today. I made it up to first on the first corner. My team mates gave me some pretty good advice on how to think about the start, so I used that and it worked like a charm. We ended up 14th overall so had some guys behind us who had a worse day than us, but we still had a good time.”

"Another great result for car #2. Three wins out of three is amazing and a real credit to everybody at United Autosports. I am very proud at the level of the professionalism we have maintained up to this halfway point of the season. Car #3 really can't seem to catch a break right now. They have shown winning speed and another front row qualification. Two punctures in two races is just the worst luck."