Action got underway ahead of this weekend’s Dunlop 24 Hours at Dubai Autodrome, with the pre-race press conference in the morning attended by Dubai Autodrome Chairman Ali Fardan Al Fardan and ATCUAE President and FIA vice president Dr. Mohammed Ben Sulayem, with drivers and teams taking to the track for the optional free practice session in the afternoon. 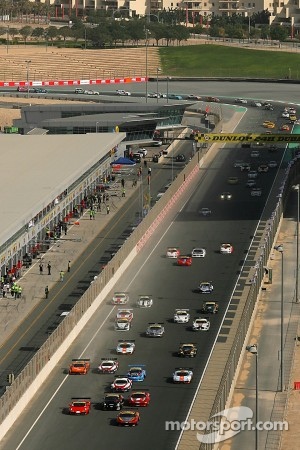 The event, under the patronage of His Highness Sheikh Hamdan Bin Mohammed Bin Rashid Al Maktoum, Crown Prince of Dubai and Chairman of the Dubai Executive Council, is being run for the eighth year in Dubai.

Opening the press conference, chairman Al Fardan said, “We are honoured that this event at Dubai Autodrome is under the esteemed patronage His Highness Sheikh Hamdan Bin Mohammed Bin Rashid Al Maktoum, Crown Prince of Dubai and Chairman of the Dubai Executive Council. This is an indication of the stature that the Dunlop 24 Hours has gained over the years, while becoming established on the international motorsport calendar. I extend a hearty welcome to all drivers, teams, crews, sponsors and media, hoping we have another epic but safe race.”

The entry list for this year’s event includes a total of 82 teams from 18 countries and over 400 drivers from 41 different countries, competing with 25 different car manufacturer brands.

Dr. Ben Sulayem said, “To the teams and drivers returning this year, thank you for your continued support, and for the many new comers, we trust that your stay in Dubai will be comfortable and enjoyable.”

“UAE motorsport continues to flourish and we many new exciting new developments in the coming years which will allow the UAE to build on its growing stature as one of the leading motorsport destinations,” added the ATCUAE president.

He said, “Last year we knew we had a good chance to win, but still it was a surprise to do so and I was very happy for that. This year it is another new challenge, a big challenge but we have assembled a very strong team to fly the Team Abu Dhabi Black Falcons colours. Once again we are aiming to celebrate another victory on Saturday afternoon.”

Pole winner last year, Briton Rob Barff will be on duty in the Dragon Racing Ferrari and is looking to make up for the disappointment they suffered last year. Barff told the assembled media, “Last year we showed that we can run at the front. Getting pole position was a good achievement and although we ran strongly, we became involved in someone else’s accident and suffered the consequences.”

He explained, “In 24 hours races of this nature there is a big difference in cars, so driving a faster car like our Ferrari, there is constantly traffic and no two laps are ever the same. We are hoping for an element of luck which is important in an event such as this one, but I believe you make your own luck.”

Abdulaziz Al Faisal aims for first win in Dunlop 24 Hours
Saudi ace Abdulaziz Al Faisal drove his first 24 hours race several years ago in a Mini. He has progressed through the ranks and has come close to winning the race, but has yet to stand on the top step of the Dunlop 24 Hours podium. He I hoping for a reversal of fortune. With the Saudi Falcons Team Schubert BMW.

Al Faisal said, “I was a little envious of Khalid Al Qubaisi who won this race on his second attempt. I have come close on a number of occasions but have yet to taste victory in this event. I think we are well prepared, with a team which has good experience in endurance racing.”

“We will see what happens. Endurance racing has many elements which need to fall just right and in your favour for victory to be possible. As mentioned there is an element of luck required, but also team work and strategy are important factors during the course of the race. This is going to be a tough but very interesting contest.

After the press conference, Dubai Autodrome came alive with the roar of GT cars as they embarked on the optional free practice session in the afternoon, which most teams used to shakedown their cars and give the drivers an early taster of the track and conditions.

Although not much should be read into the unofficial practice times, particularly on the opening day, the fact that to top eight cars were all of different makes is an indication of the how close the race is likely to be.

Racing Divas campaigning for a good cause
Also on the grid, and racing for a worthy cause are the Racing Divas who will be driving a Team Schubert BMW. Apart from competing for top honours in their class they are highlighting the plight of people suffering from amyotrophic lateral sclerosis (ALS) also known as motor neurone disease.

Team leader Liesette Braams told media, “Of course we are here to race and try to win our class. Our car is pink and has hearts on it, but it does not mean we are not serious. At the same time we are showing our support for people suffering with ALS and this makes us proud to be here in Dubai.”

Free Practice starts on Thursday morning with qualifying in the afternoon, followed by night practice. The race starts at 2:00pm on Friday and runs until 2.00 pm the following day.

Entrance for race fans to the grandstand and paddock are is free throughout the weekend.

The 90s F3000 star winding back the clock in NASCAR Euro

Will softer tyres shake up the F1 order in Austria this weekend?

Black Falcon takes outright win at the 24H Dubai in 2018

The 90s F3000 star winding back the clock in NASCAR Euro

Will softer tyres shake up the F1 order in Austria this weekend?

Why Villeneuve failed to repeat his father’s Monaco F1 success