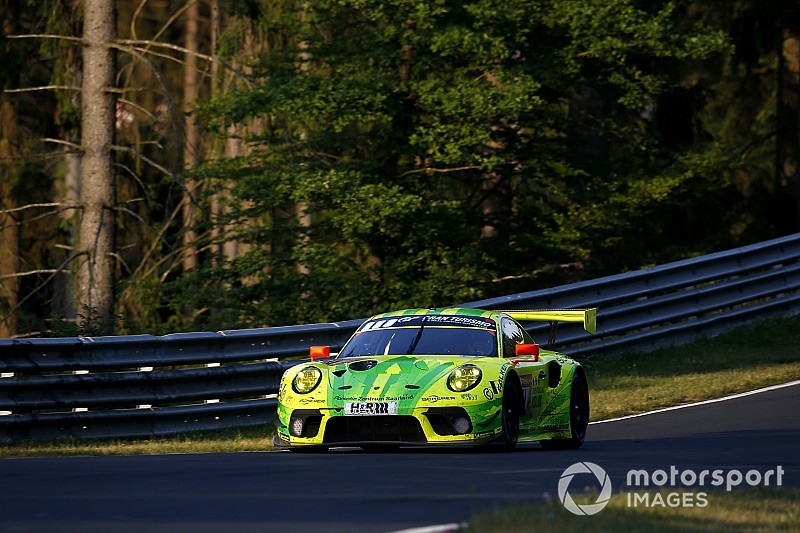 The #911 Manthey Racing Porsche is still leading the Nurburgring 24 Hours after three-quarters distance, starting the morning hours with a lead of just under two minutes.

The leading Porsche 911 GT3 R of Laurens Vanthoor, Earl Bamber, Michael Christensen and Kevin Estre was in command after the first six hours and consolidated that lead during the night.

One of its main competitors faded just after the eight-hour mark in the race.

The #2 Black Falcon Mercedes was confirmed a retirement late on Saturday night after Adam Christodoulou caused contact with the #90 Toyota Gazoo Racing Supra.

The Briton overshot the first turn after he left pitlane for his first stint and shunted into the side of the SP 8T-Class Toyota.

Christodoulou managed to bring the car back into the pits after a single lap of the Grand Prix circuit, but the damage was too severe to continue the race.

It left the #911 car with a lead of two minutes during the night which was reduced to 1m30s around the 18-hour mark.

The #31 Frikadelli Racing Porsche gained a few places and currently lies in third, just over two minutes behind the #911 car.

Christopher Haase is leading the assault for Audi in fourth place with the #29 Team Land car. That car battled almost all night with the sister Team Phoenix Audi of Frank Stippler, Pierre Kaffer, Frederic Vervisch and Dries Vanthoor.

The #6 Black Falcon Mercedes was in sixth place at the 18-hour mark with sister cars #3 Black Falcon and #16 GetSpeed on its tail.

After a disastrous opening part of the race for BMW, the second of the Walkenhorst M6 GT3s crashed at the start of the 12th hour. The leading car for the Munich brand, the #33 Falken machine, was running 12th.

With six hours to go there were still nine cars on the lead lap.