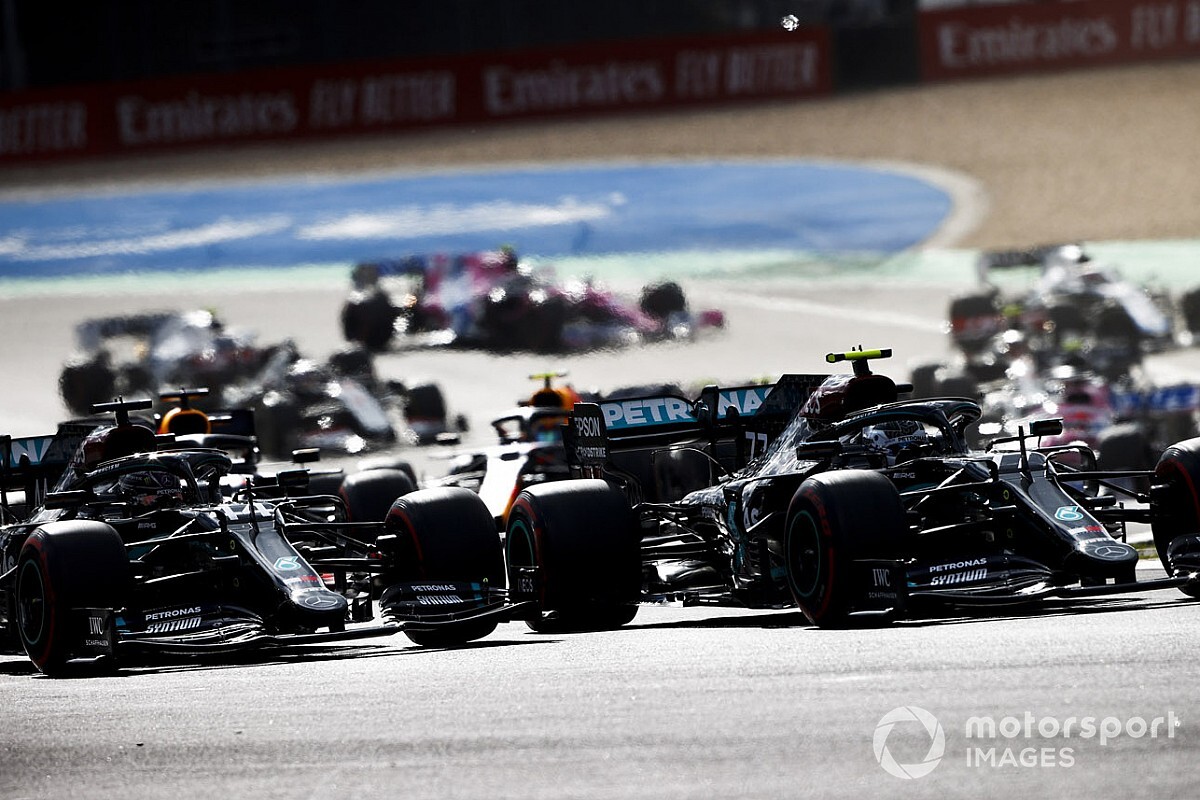 Lewis Hamilton won the Eifel Grand Prix for Mercedes at the Nurburgring, round 11 of the Formula 1 World Championship, after pole-winner Valtteri Bottas retired.

From pole position, Bottas only just held on to his lead as Hamilton lunged down his inside at the first corner and ran him wide. But Bottas clung on around the outside of the Turn 1 runoff, and grabbed the top spot with the preferred line into Turn 2.

Bottas led the opening stages but locked up at Turn 1 on Lap 13, and Hamilton quickly pounced, droving around the outside of him at Turn 2. That forced Bottas into the pits, having dropped 3s in just one lap, rejoining behind Renault’s Daniel Ricciardo.

A virtual safety car was required to remove George Russell’s stranded Williams, which had been hit by record-setting grand prix starter Kimi Raikkonen’s Alfa at Turn 1. Both Hamilton and second-placed Max Verstappen took advantage to pit, with the Red Bull gaining two seconds.

More drama unfolded as Daniil Kvyat straightlined the last chicane and was hit by Alex Albon’s Red Bull – swiping the front wing from the AlphaTauri. Albon, who was penalized, would later retire with a power unit issue.

Bottas then lost power, dropping to fifth, and then retiring into the pits a lap later. Also in trouble was third placed Lando Norris, who also lost power from his McLaren’s Renault power unit. He fell to sixth before pulling off on Lap 44, with smoke pouring from his sidepod.

That prompted a safety car, before which Hamilton had pulled away from Verstappen on the second stint, extending his lead to over 9s.

Ricciardo pitted immediately under the safety car, unlike Sergio Perez (Racing Point) – who stayed out for an extra lap. The race restart with 10 laps to go, Hamilton leading Verstappen, Ricciardo, Perez and Carlos Sainz (McLaren).

Hamilton pulled clear to take victory, as Verstappen had to fend off Ricciardo at the restart to finish second. Ricciardo scored his first podium finish with Renault, ahead of Perez, Sainz and AlphaTauri’s Pierre Gasly.