Alfa had at least one car in the top 10 in all three practice sessions. Kimi Raikkonen was ninth in FP1, and his teammate Antonio Giovinazzi earned eighth in FP2 and then an impressive sixth in FP3.

After making it out of Q1 the two drivers could manage only 14th and 15th in Q2, with Giovinazzi then picking up a three-place grid penalty for impeding Nico Hulkenberg.

Both men lost places on the first lap of the race and they eventually finished well outside the points, with Raikkonen in 17th and Giovinazzi – penalised again after a clash with Robert Kubica – in 19th and last place. It was by far the team’s worst performance of the season.

“I think that we lost the race in Q2,” Vasseur told Motorsport.com. “The pace was there in FP1, FP2 and FP3, we were consistently in the top 10.

“Then between Q1 and Q2 we lost something, we were slower in Q2 compared to Q1, and considering the track improvement and so on, it’s just unrealistic. Then we f***ed up the weekend.

“We have to do a proper analysis of what we did well or wrong, but the pace was there at some stages of the weekend. We have to build up to the next one on this basis.

“From one session to the other you could destroy the weekend. It was more or less the opposite for [Carlos] Sainz, he was nowhere at the beginning, and he came back.”

Asked what the team had got wrong, Vasseur said: “It was more about the tyres.”

Vasseur insisted he had no issue with Giovinazzi’s incident with Kubica at Rascasse. It cost the Italian time on the road, and led to the 10-second penalty that he served during the pitstop.

“We had a poor first lap. Kimi almost spun with [Lance] Stroll, then Antonio also had a poor start and was stuck behind both of the Williams. Then it’s done. He spent 15 laps behind Kubica, and at least he tried.

“We can’t blame him. We know that if you have to overtake it’s risky, but if you say 'let’s stay behind' you might as well just do the qualifying.”

Giovinazzi, for his part, said: "I think I was behind the Williams for too long and I was trying everywhere. I tried at Rascasse but there was not space enough and we touched with Robert.

"But nothing to say to be honest. I think it's a track where it's impossible to overtake and I tried because my pace was better than them but it didn't happen. " 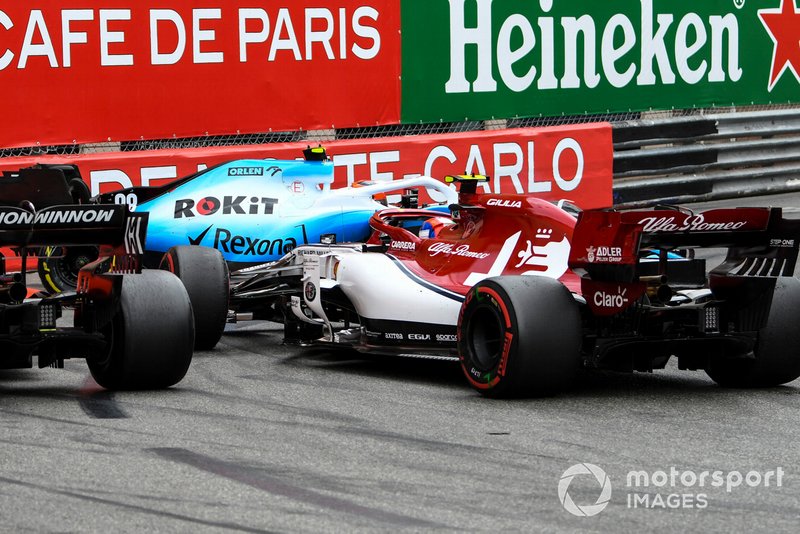 Ferrari loads up on mediums for Montreal F1 weekend