Not all solutions in Formula 1 that face regulatory scrutiny are banned outright. In fact, many get at least a small stay of execution.

In 2012, a system introduced by Mercedes had just that, as the FIA cleared what became known as its double DRS for use throughout the season.

It was a system built on another solution that Mercedes had been working on during the latter phases of 2011, and had been uncovered by Giorgio Piola at the time.

Mercedes had several different front wing solutions available to it at the Japanese GP that year, and Piola had noted the way the team chose not to lift its new wing design when moving it around the pit box.

Surmising it was looking to conceal something on the underside, Piola waited around the garage whenever possible to get confirmation.

Having laid in wait for some time and noted that on one occasion a mechanic felt under the wing as if to clear debris from a slot - he duly went off and created an illustration of it. 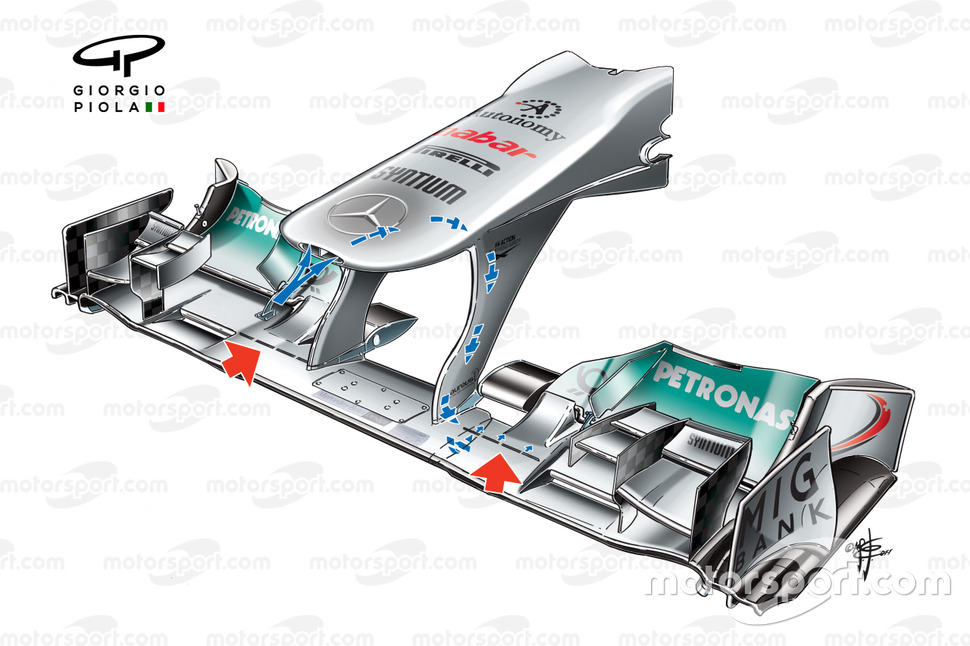 Michael Schumacher's crash in Korea confirmed his theory, as Piola was able to capture images of the outlets on the underside of the wing when the car was hoisted off the recovery truck.

Team chief Ross Brawn would later find Piola and congratulate him on his discovery and drawing of the system, knowing he'd been able to accurately replicate the size and position of the outlets without even seeing them.

This W-duct solution, as it became dubbed, was a passive solution that looked to alter the front wing's characteristics as speed built, in order that downforce and drag reduced in line with the use of DRS.

This was fine during qualifying, when the DRS use was unlimited but, during the race it could be unsettling.

The solution's existence would be short-lived in any case, as for 2012 the FIA made changes to the regulations that stipulated that the inlet in the end of the nose may no longer be used for anything other than the purposes of driver cooling. 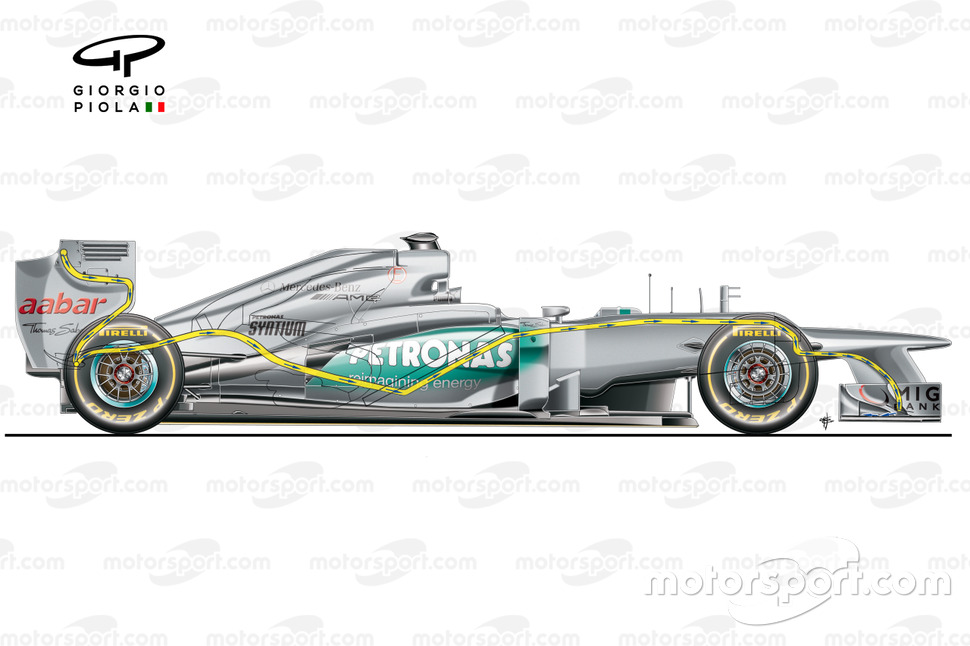 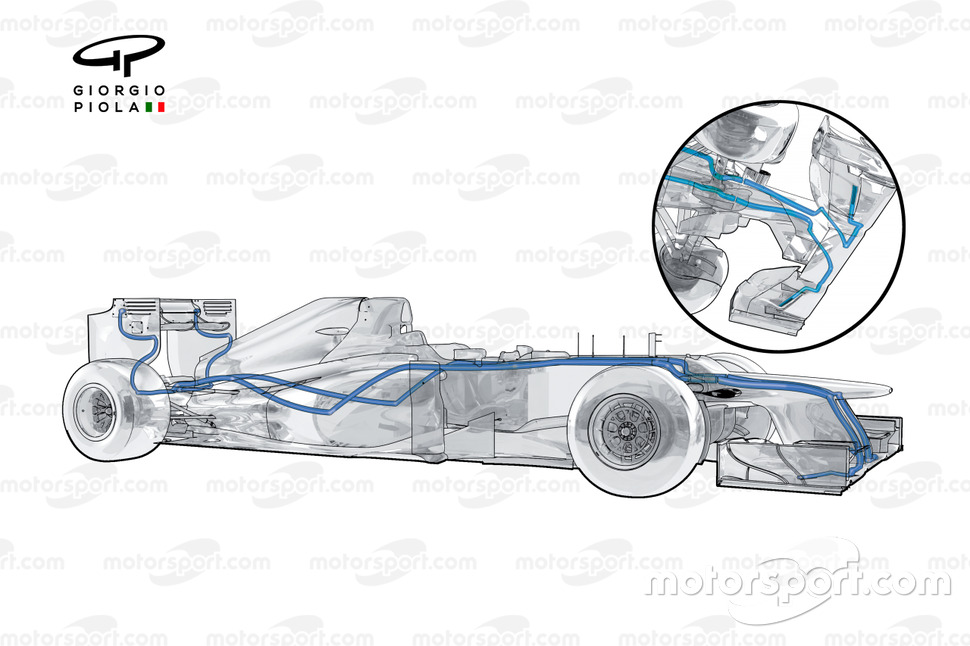 Enter Double DRS, a solution that took the original 'W-duct' concept and paired it with the DRS by way of the research done by the team on the F-duct in 2010.

The system wasn't extremely complex but, much like the F-Duct, it relied on space having been left within the chassis to allow for all of the pipework to be routed. As such, the other teams sought to have it banned, rather than build their own versions. 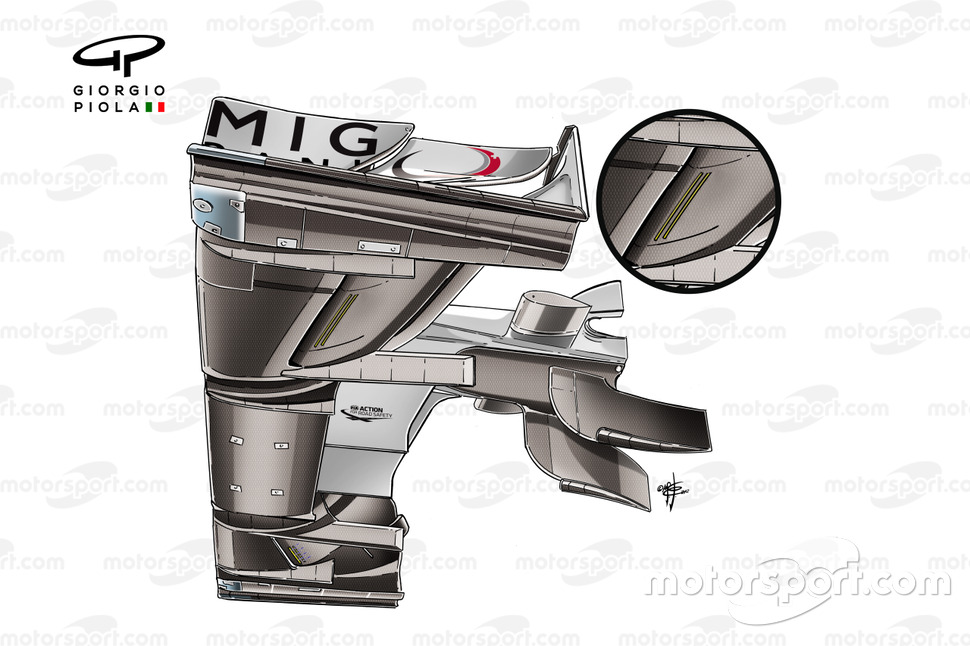 Mercedes W03 underside of the front wing, note the slot which is used to 'stall' the wing when the DRS is activated

While the idea was good enough to pursue at the time, it was not set for a long future. The FIA declared it could only be used for 2012, plus Mercedes quickly realised that it had become an aerodynamic handicap, owing to the inflexibility it had in designing its front and rear wings when compared with the competition.

Remember, this was at a point in F1's history when flexi-wings were at their most prominent, a feature that Mercedes was unable to fully exploit owing to the construction of its front wings.

For example, the team's rear wing endplates had to be a certain thickness, not only to enclose the pipework for the system but also the actuation method for DRS.

Was it a total dead duck then? No, as Red Bull saw fit to develop its own version of Double DRS, albeit in a slightly different way. 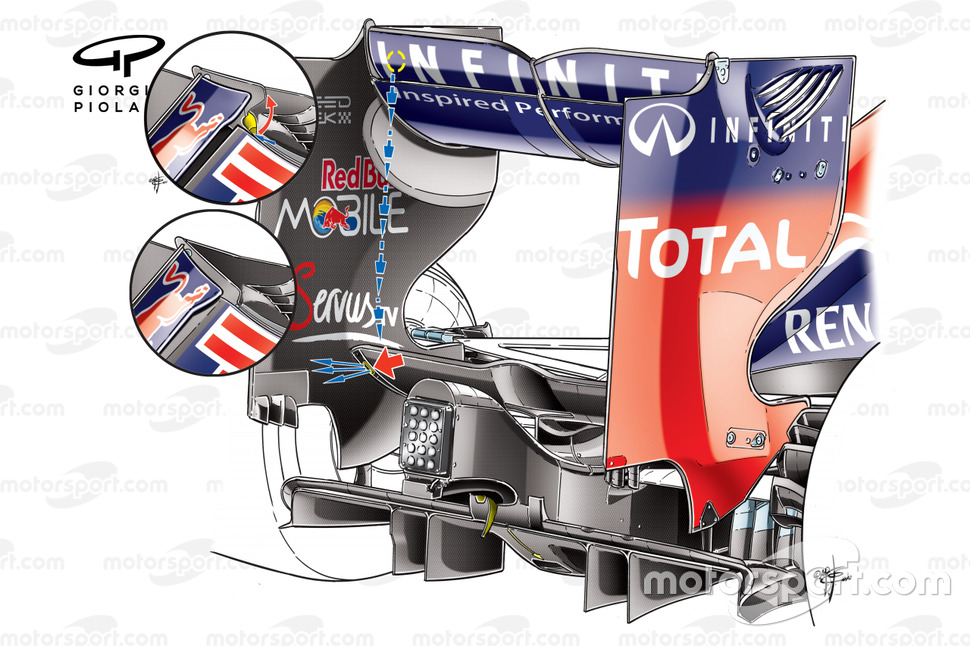 The solution, introduced by Red Bull at Suzuka, would only have a life of a few races, owing to the impending rule changes. But the team decided it was still worth the effort and used pipework in the rear wing and DRS to 'stall' the lower beam wing too.