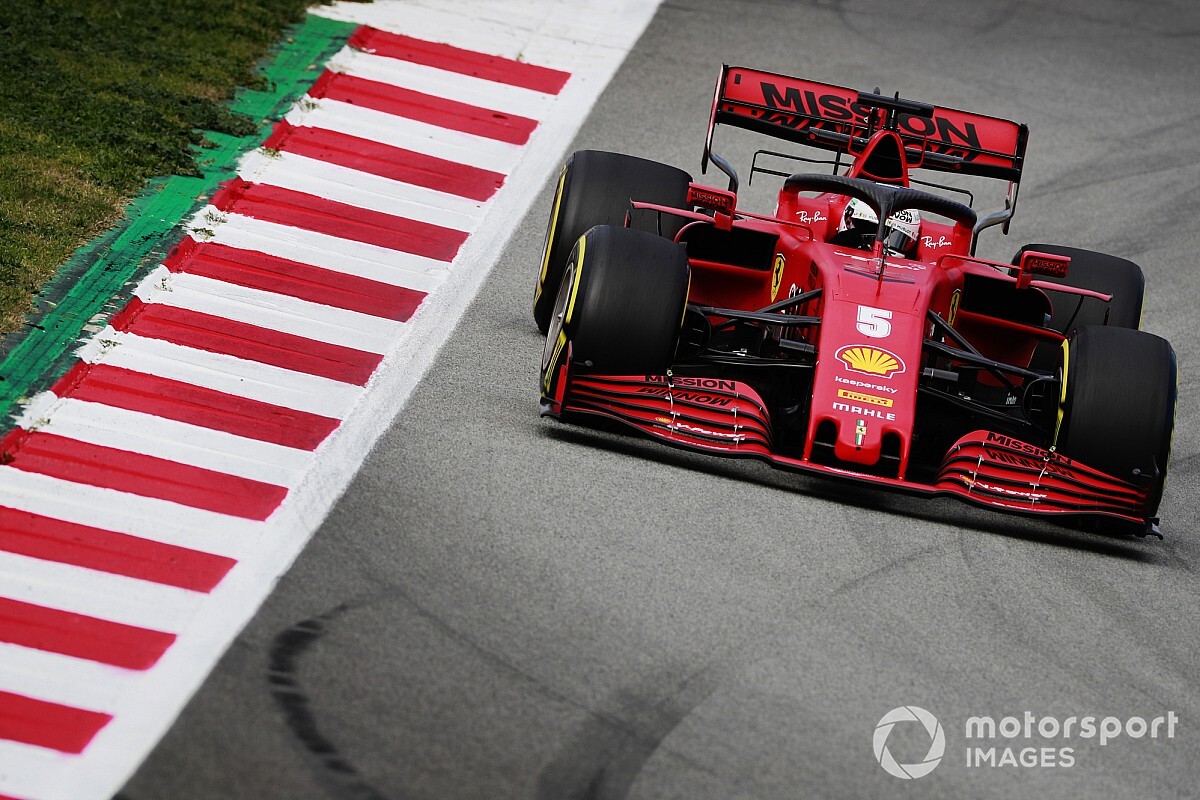 Clocking in a 1m17.093s lap with 45 minutes to spare, Vettel put himself on top of the timesheets before almost immediately running wide on the exit of Turn 5, spinning and pouring gravel all over the circuit.

After the short hiatus in running, Vettel returned to the circuit – and with 15 minutes remaining bolted on the C5 tyres to further cement his advantage over Lance Stroll.

Vettel's spin prompted the third red flag of the session, which was particularly stop-start in nature to nix any teams' hopes of chaining together a host of long runs.

The first red flag was prompted by Antonio Giovinazzi, who ended his morning mileage early after a spin at Turn 4, during which he hit the wall with his rear wing.

Although Giovinazzi recovered and was able to return to the circuit, he shed numerous pieces of debris on his retreat to the pits – which required the session stoppage to clear.

Max Verstappen brought out the second having beached his Red Bull at Turn 5 with just over an hour remaining on the clock, while Vettel added the third.

Verstappen managed to re-appear for the final 30 minutes of running, with seemingly benign damage to his RB16.

Check out our F1 podcast from Barcelona...

Overnight rain left the Barcelona circuit in a particularly damp state at the beginning of the day, although there was a smattering of action on the intermediate tyre in the opening hour.

Once the circuit had dried sufficiently, the cars began to take to the circuit to conduct aero tests, with a number of teams trialling new parts in the morning's running.

Racing Point driver Stroll ended the first part of the day in second, having spent a large portion of the session with a monopoly on top spot – but his flurry of fast times was overcome by Vettel.

Nicholas Latifi, who suffered from engine woes on Wednesday morning, enjoyed a much better day and came within half a second of Vettel, slotting in behind compatriot Stroll.

Fourth was occupied by Lando Norris, who kept clear of Verstappen by just over a tenth, while Valtteri Bottas claimed the sixth-best lap having headed the timing boards early on.

Bottas went off in the same place as Vettel earlier in the day, but avoided making enough of a mess to pause the session.

The Finnish driver was eclipsed by Vettel in the lap count stakes, managing 47 laps to the four-time champion's 49.

Esteban Ocon beat Kevin Magnussen to seventh overall, while Giovinazzi was unable to return to the circuit after his early incident.

Pierre Gasly completed the top 10, only setting a lap in the 1m22s having presumably opted to work on his AlphaTauri's race pace.