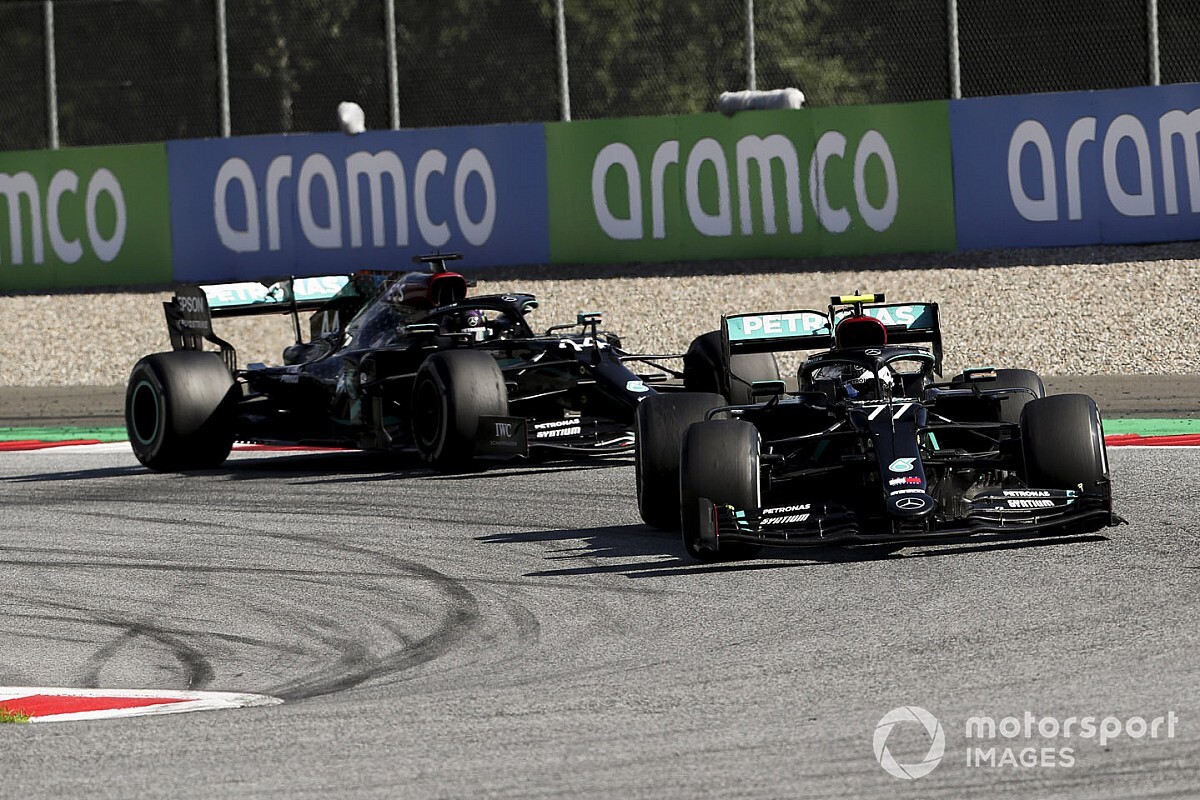 Mercedes has rubbished any talk that it used 'Multi 21' tactics of cryptic team orders in the Austrian Grand Prix to call off the battle between its drivers.

Valtteri Bottas and Lewis Hamilton were leading the season opener, but both were facing critical gearbox issues that Mercedes feared could cause them to retire from the race.

As well as both drivers being warned to keep off the kerbs, there was a great deal of intrigue when Bottas was given the radio message: "Urgent Chassis Default Two One."

That message prompted memories of the Multi 21 radio call that Red Bull famously handed out to Sebastian Vettel and Mark Webber at the 2013 Malaysian Grand Prix that was ignored and prompted huge controversy.

Asked after the race about if team orders were used, Mercedes boss Toto Wolff said: "Don't get paranoid! This is nothing to do with Multi 21.

"We have never played that, unless there was a problem on the car, and we would never interfere in a fight in the first few races of a season. They were completely free to race each other.

"What we did, that we always do on both cars, we gave them the same recommendations to stay off the kerbs. And because there was no competitor basically at a certain stage, we switched the engines to a lower mode to protect the power unit.

"There was no, zero team orders. No hidden, no subtle, and no direct."

The only time Mercedes did consider perhaps interfering with the positions was in the closing stages when Hamilton had a five-second penalty for his collision with Alex Albon.

The pit wall discussed the idea of telling Bottas to let Hamilton through so the British driver could extend a gap to protect second place, but in the end it was felt too complicated a situation to manage.

Wolff added: "Maybe with all the information afterwards we would have gotten P3. There was a discussion, but that starts to get really messy.

"We've had it in Budapest many years ago, and we nearly got overtaken by [Max] Verstappen. The thinking that I had was that you need to explain to Valtteri what is going on, that there is a five-second penalty, and then ask Lewis in the last lap to let Valtteri pass again.

"So if Valtteri can't keep up, he can't let him past, and if [Charles] Leclerc and [Lando] Norris on fresh tyres are on his gearbox, then obviously Valtteri rather than winning the race ends up fourth. Too much complexity to do such a switch. Too much risk."