Valtteri Bottas and Max Verstappen both blamed too cold tyres for their failure to improve in the final shootout for pole position at the Monaco Grand Prix.

While Lewis Hamilton managed to eke out his best lap of the weekend on his final run in Q3 to grab the top spot, both Bottas and Verstappen had to abort their runs after tyre temperature woes hit them.

Both men had far from ideal out-laps as they had to work their way through traffic, and that meant their tyres were not in the ideal operating window for the start of their final runs.

Bottas, who was pipped for pole by Mercedes teammate Hamilton, said: "My feelings at the moment are really, really disappointed with qualifying, I really felt I had the speed today.

"I felt really good in the car all day. In the first run I felt there were two or three tenths I could improve, so I should have done a better job in the first run.

"In the second run I had quite a lot of traffic on the out-lap so had to go off line in a few places, and the tyres just didn't work in the second run. So disappointing."

As well as not being able to get his tyres up to the right temperature, Bottas said that going off line to overtake slower cars had put him on to dirty sections of the track - which further hampered their preparation.

"The issue was for me the traffic on the out-lap," added the Finn. "There were a couple of cars I was stuck behind and had to pass off line, and you get quite a bit of dust on the tyres. If you cannot get enough temperatures then on this track it is really critical.

"Already at Turn 1, I felt the tyres were not there and every corner was slower and slower until I had a big snap at Turn 8. That was it."

Verstappen felt that at best he could have got within three tenths of pole position, but says any hopes of splitting the Mercedes cars were gone by the first corner of his final lap

"When you look to the weekend we were just missing the two or three tenths in the end," explained the Red Bull driver, who will start third. "Q2 was a very good lap, also the tyres were switched on, and here it makes quite a bit of difference.

"In Q3, my first run going into Turn 1 the rear tyres were not gripping up, so I lost a bit of time there. The rest of the lap was pretty stable compared to Q2, so not bad.

"Then my final run in Q3, I had a bit of traffic on the out-lap and when I started the lap they were just cold, and I was already two or three tenths down so I decided to abort.

"In general we did a good job, coming into this weekend. I had a feeling we were not as strong as we last year here, but for me it was a good qualifying." 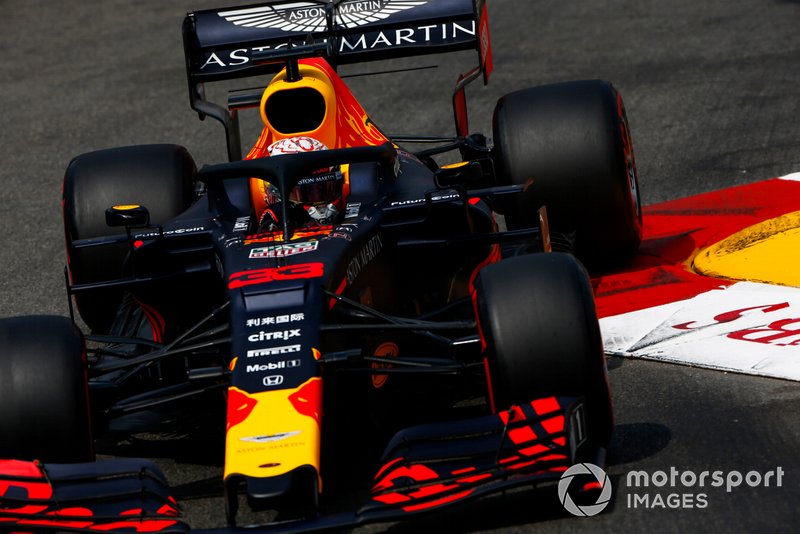 Monaco GP: Hamilton on pole as Leclerc goes out in Q1