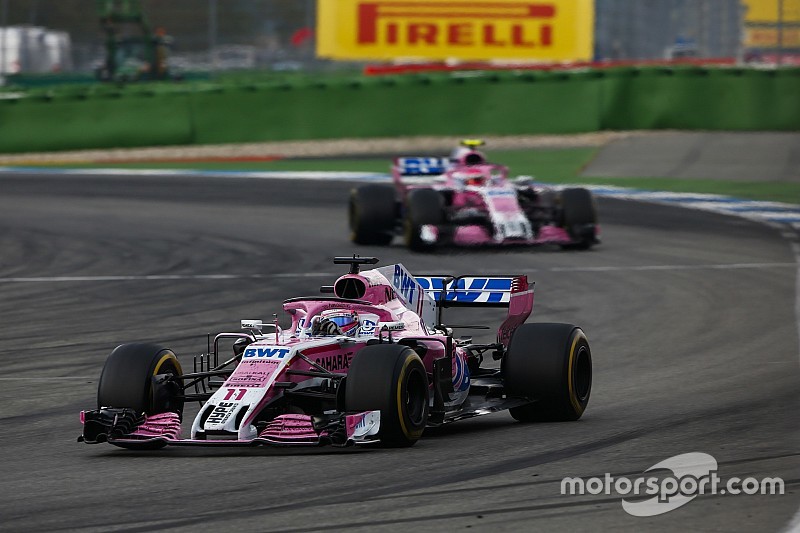 Vijay Mallya says Force India must continue to take chances if it is to retain fourth position in the constructors’ championship in the 2018 Formula 1 season.

Force India elected not to pit Sergio Perez and Esteban Ocon when the safety car was deployed during the latter stages of the German Grand Prix, giving priority to track position over fresher tyres.

This allowed Perez and Ocon to finish seventh and eighth respectively as they secured Force India’s third consecutive double points result of the season.

With Haas tied with the Indian outfit in the standings and Renault only 21 points ahead, Mallya believes a single race could alone swing the championship in favour of any of the three teams.

“The midfield battle is as close as it has ever been and each race weekend can swing the balance one way or the other,” he said.

“We have shown in Germany how crucial it is to take your chances when they materialise, when perhaps earlier in the season luck wouldn’t have favoured us.

“Our target for the rest of the year doesn’t change: we are still aiming to retain fourth place in the championship and we will give everything to make it happen.”

Perez, who scored Force India’s first podium since 2016 at Baku earlier this year, believes high downforce and low tyre degradation are two key characteristics a car should have to be strong around the Budapest circuit.

“I enjoy the Hungaroring: it’s a circuit with a lot of corners that can catch you out and it’s a big challenge to get a clean lap together, especially in qualifying,” he explained.

“The races, too, can get quite interesting. It’s a narrow and twisty track but it still offers some opportunities for overtaking.

“The key for a good race in Budapest is to have a car with plenty of downforce but also that is not too hard on the tyres. It tends to be very hot there so it’s important to look after them.”

Ocon added that the Hungaroring can be quite punishing for the drivers as one mistake may mean drivers losing time for several corners in a row.

“The track is quite narrow, but it’s still very fast. There are a lot of quick changes of direction and the corners come one after the other with no chance to catch a breath,” he said.

“That’s what I really like about it – you need to keep pushing all the time and make the most of the sequences of corners. You need to have a good rhythm there and if you make a mistake, you pay for it in the corners that follow.”