Hamilton says he chose not to block Bottas in early duel

Lewis Hamilton says he decided against blocking his Mercedes Formula 1 teammate Valtteri Bottas while the pair were battling in the early laps at Silverstone, as it would've been "not the right thing to do". 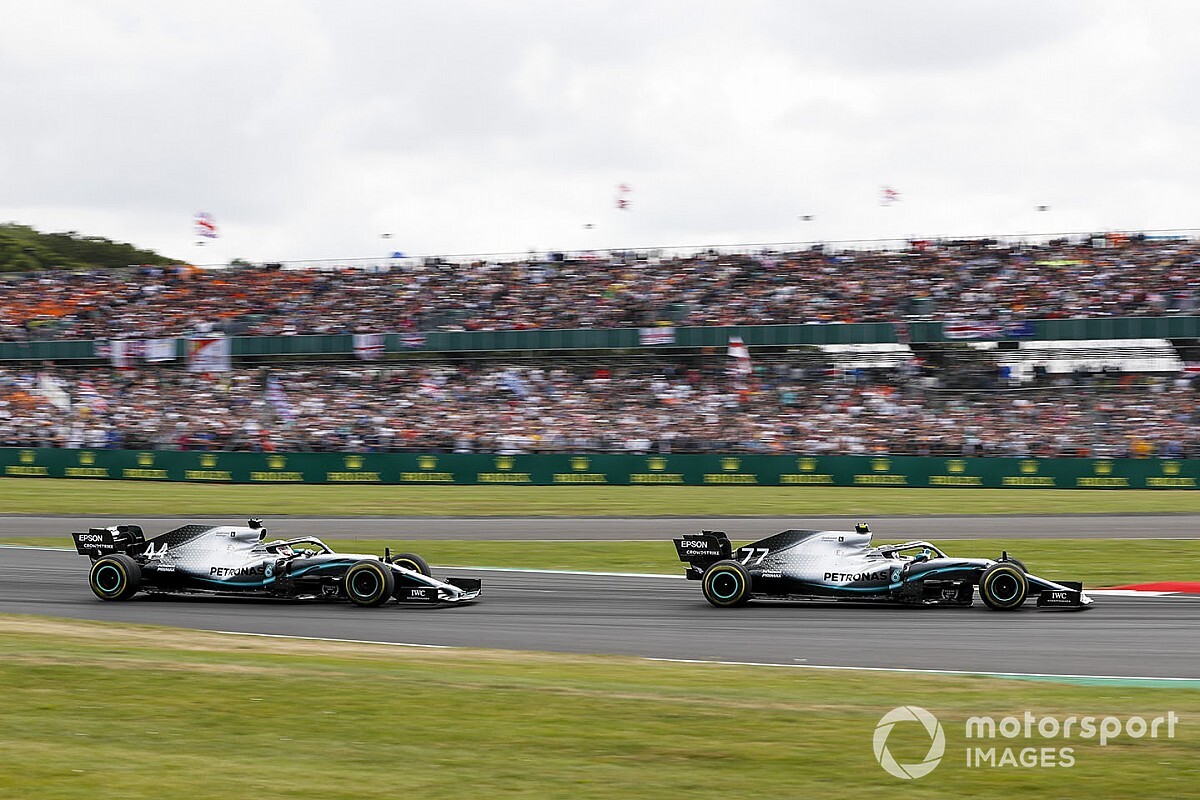 Hamilton managed to squeeze past race leader Bottas at Brooklands on the fourth lap, but Bottas then surged back past heading into Copse.

Hamilton said had he been fighting a driver from a different team, he would have taken more risks.

“It’s no secret that Valtteri wants to beat me and I want to beat him,” said Hamilton. “And that fighting spirit is stronger than anything, individually for all of us. I think it’s so vital though, to have a respect.

“I know how hard is it to get a pole here. He did a fantastic job [in qualifying], and I know how hard it is to wake up and deliver every weekend, as do these other drivers, so the respect is there between us. I think we want to race wheel-to-wheel and tough. When you’re racing with a teammate, it’s on a different level.

“If I were racing a Ferrari, you take more risks. Still respectful, but you can lean on them a bit more but as team mates, we sit down at the beginning of the race, we talk about Turn 1 and how we’re going to respect each other, make sure we don’t collide. And even when I overtook him and he was coming back, I could have swept across the front and blocked him – but that’s not the right thing to do.

“Ultimately it enabled him to get back past – but that’s racing. It was really fair, and it was great.”

More from the British GP:

Hamilton said his aggressive early charge came as a surprise to Bottas, who was expecting him to be preserving his tyres.

“Today I was supposed to start the race and save the tyres, and today I went flat out from the beginning, which was definitely not expected from everyone. Valtteri definitely didn’t expect it. The long runs, everyone else’s tyres were degrading massively, and I had the best long run on Friday of everyone.

“I’m sure everyone would have seen my data and been looking at how I saved the tyre, and tried to do the same, and I just did the opposite. I just went for it and risked it all basically trying to get past. We had a great, great battle, which was awesome. I hope we get to have more like that.”

Hamilton insisted that the safety car didn’t give him the victory, as his one-stop strategy would have played out in his favour

“I was going to do a one-stop, and he was on a two, so the safety car wouldn’t have made any difference. When he pitted on lap 16, I think it was, my plan was to offset as much as I could. I think I went four laps or something, and I probably could have done another lap or two.

“He came out of the pits seven tenths inside my window - and then it came to one [second], then one and a half, but it stayed around one and a half to two. If I’d done another lap it would have maybe got to two and half, and I would have come out on my fresh hards.

“And I could have just sat behind him if I wanted to, and he then he would have had to pit. So I would still have had that 21-second gap. So it didn’t really make a difference. Even though I was behind him I would have of course tried to overtake him, but in hindsight I didn’t need to.”