Lewis Hamilton says the extensive floor damage he suffered in the Mexican Grand Prix left him unable to attack as much as he wanted to and cost him several tenths per lap.

The Mercedes driver suffered a broken floor in a chaotic first lap at Mexico City, as the right side of his car was struck by Max Verstappen's left rear wheel as they battled for position through Turn 1.

Hamilton could not see the damage when driving, but having felt a big difference in the car's handling he made sure to check it out straight after the race. 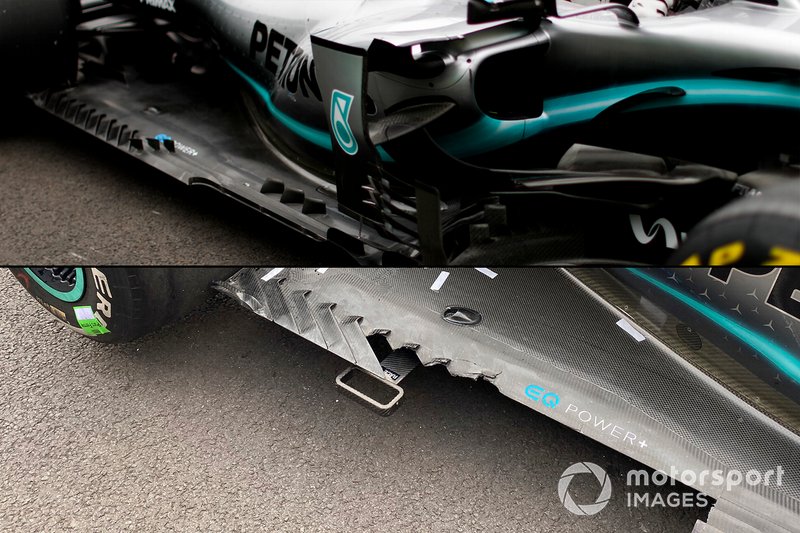 As can be seen in the above photograph, the damage is to the vertical slots alongside the edge of the floor, along with the diagonal ones.

These let the airflow moving over the top of the floor spill outwards to build a seal to the floor, stopping any dirty air from leaking in and disrupting diffuser performance. With that damage, one half of the diffuser would have been working harder than the other, meaning the aero balance would have shifted towards one side of the car.

Hamilton said that he had to adapt his car's settings to try to overcome the handling imbalance, but was never totally comfortable.

"I didn't actually know how much was missing or what was damaged, but the balance was quite a lot different," he said.

"The rear end was quite weak so I was particularly sliding around a lot in the high-speed, so I had to change my settings quite a lot and had to drive it a little bit differently because I couldn't attack the same way on the entry of corners because the rear stability wasn't the same.

"I'll probably find out later on just how much we were losing but I would imagine a good couple of tenths probably, just from rear floor damage. It's quite a sensitive area around where the tyres is."

The scale of the damage to Hamilton's floor in Mexico is much bigger than in Australia, when a missing element of the floor cost him performance that contributed to him failing to get on terms with teammate Valtteri Bottas.

Ocon: Only Hamilton has done a better job as Alonso’s F1 teammate

Hamilton: Ricciardo "far too talented" to be Mercedes F1 reserve in 2023