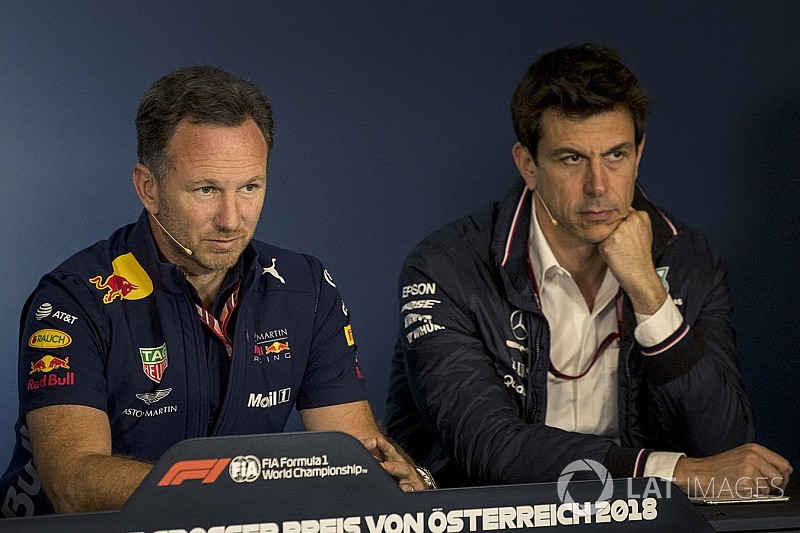 Red Bull boss Christian Horner thinks it ‘unfair’ that Mercedes strategist James Vowles was put in a situation where he felt he had to confess to making an error in the Austrian Grand Prix just to keep Lewis Hamilton calm.

Vowles made a rare appearance on team radio during the Red Bull Ring race to own up to Hamilton that it was his mistake to not pit under the VSC period. Horner has said he does not understand how such a situation came to pass – and questioned why Vowles needed to be singled out.

“It’s always difficult to know the intricacies of other teams but I think the one thing you have to do as a team is win as a team and lose as a team,” said Horner, speaking at the Red Bull factory.

“That’s why we hardly at all, in success or failure, talk about individuals, because that puts an unfair amount of scrutiny and pressure on that individual.

“Certainly our philosophy is that as a team, it’s collective responsibility rather than an individual. Of course there has to be accountability, but it’s something that’s dealt with in the right environment behind closed doors and not in a public forum.”

Horner thinks it equally strange that Vowles needed to intervene at all just to motivate Hamilton.

“I have never worked with Lewis and I don’t know what makes him tick and what doesn't, but it a fairly bizarre thing to need to do for somebody to throw themselves under the bus to motivate a driver to go faster from fourth back into the lead,” he added.

Horner is clear that he would never have allowed such a situation to play out at Red Bull, as he was adamant that in similar circumstance it was his role as team principal to take flak for people.

“It’s not the way I operate. My view and my role as team principal of this team is that you’re here to protect your workforce to make sure they’re represented in the best possible way – that’s on the good days and on the bad days.”

While Horner has questioned the circumstances around what happened in Austria, Mercedes technical director James Allison has heaped praise on Vowles for what he did.

Speaking in Mercedes’ Pure Pit Wall post-race debrief, Allison explained why Vowles had elected to give the radio message, and why it was a sign of team strength rather than weakness.

“In this particular instance it was James showing an extremely broad pair of shoulders, standing up and saying ‘that was my mistake Lewis’ and I am sorry for it,” he said.

“It was very characteristic of James, but also a measure of how his team operates where people will hold up their hand when they have made a mistake, knowing that the team’s attitude to mistakes is that they are things that we learn from, rather than things that we throw blame around for or cause great polemics within the team.

“So it was a very good example of strong leadership by James trying to explain to Lewis what had happened. And the importance of that message meant that James wanted to give it personally rather than pass it through the intermediary of the race engineer.”

Strategy Report: How disruption turned Austrian GP on its head