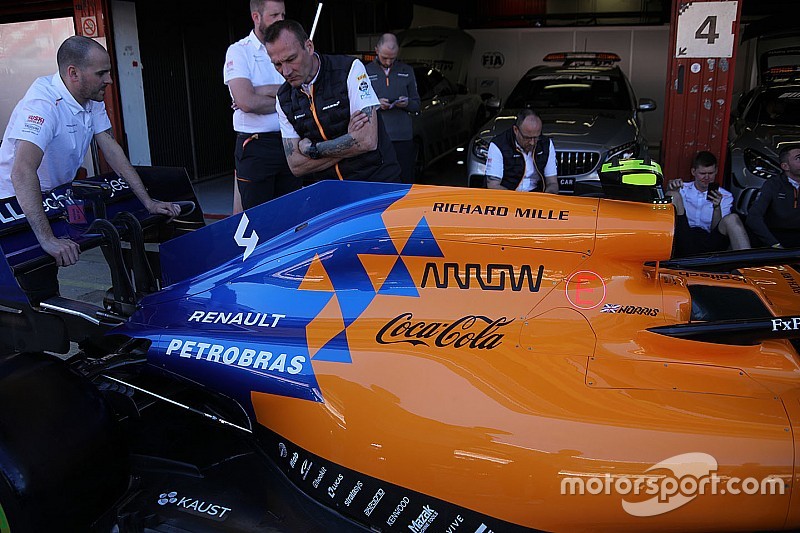 McLaren has decided to follow the Renault works team in running the French car manufacturers' upgraded engine at the Spanish Grand Prix.

Renault has introduced a development step on its internal combustion engine that is aimed at boosting performance as well as improving reliability.

One of the big advantages of the new engine version is that it can run in higher power modes for longer than the older version, which had to be wound down to ensure it did not hit trouble.

Daniel Ricciardo said that the increased confidence over reliability should allow Renault drivers to push harder.

"It's mainly for reliability, basically. I don't know how much detail or what parts have changed, but it's a V6," he said.

"Some materials, I know what but I don't know how much I can say, have changed to help reliability. For now that's the target, but if we see it's viable then we can start pushing the power curve and other things people do in qualifying."

Renault has worked flat out to get its new engine ready for this weekend, and it faced a last-minute push to get four versions of it ready for both its works team and McLaren.

With the final engines having arrived overnight, McLaren has confirmed that both Lando Norris and Carlos Sainz will be running the latest engine version.

Both drivers are set to have the engine installed from final practice on Saturday. Only Ricciardo is using it so far in Friday practice, having also fitted a new turbocharger and MGU-H.

The change will mean Sainz moving on to his third engine of the year, so a grid penalty later on in the season is now inevitable.

As well as using the new Renault engine, McLaren has also introduced a hefty update to its car for Barcelona, which it hopes will allow it to build on its encouraging start to the season that has left it fourth place in the constructors' championship.

NASCAR's low downforce package proves quite a test for Goodyear