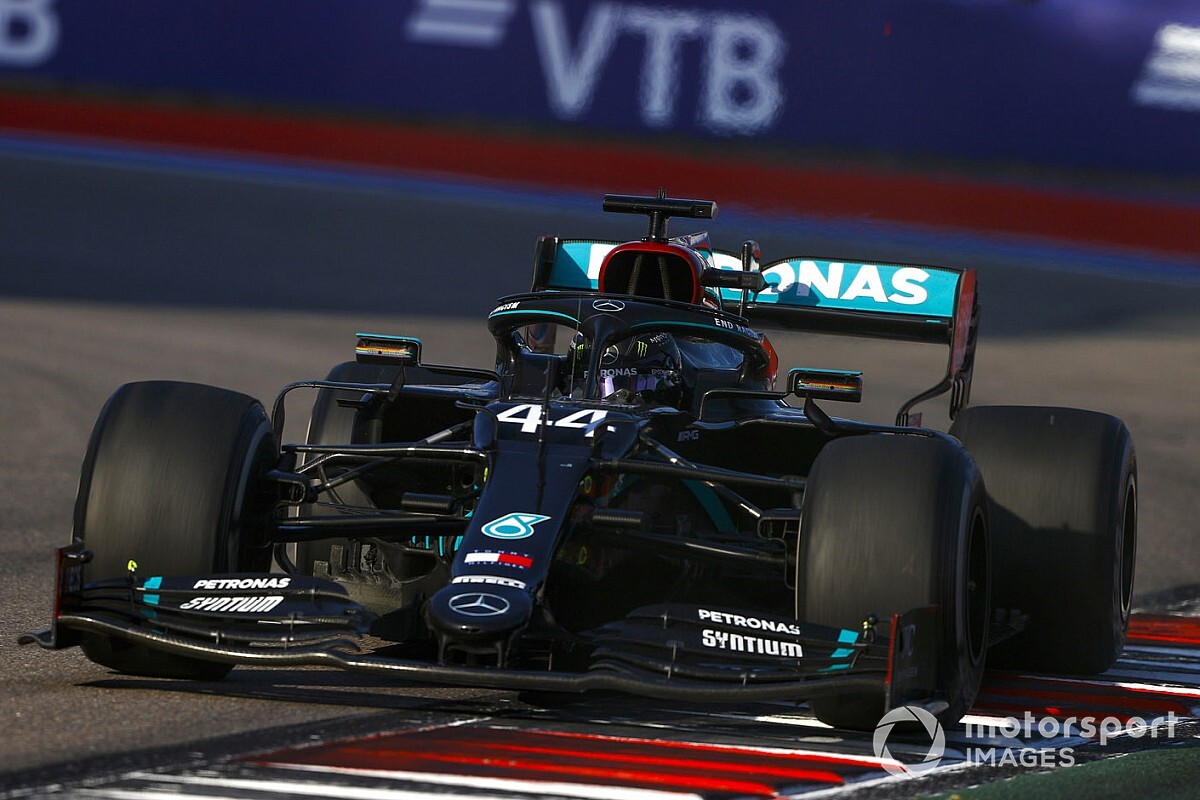 Hamilton was awarded two five-second time penalties for conducting two practice starts outside the designated zone beyond the pit exit, and both came with an extra penalty point for his licence.

That put him on 10 penalty points for the ongoing 12 month period, with two more incurred before the Turkish GP automatically triggering a race ban.

However, after the race the stewards spoke to Hamilton and the Mercedes team and in a highly unusual move changed their minds.

They removed the penalty points and instead fined the team €25,000 on the basis that the driver had been told he could use that location for starts.

"The stewards after the race heard from the team, and the driver of car 44," said Masi.

"So Lewis, and Mercedes spoke to the stewards, at which point it was actually a team instruction to Lewis where he could perform the practice starts.

"And on that basis the stewards have just now rescinded the penalty points on both those decisions, because they thought it was inappropriate. And, as a result, have fined the team €25,000 for that instruction.

"And effectively, yes, it was him driving the car. However, a contributing factor was that his team instructed him to do so at that point, and therefore, they saw fit to revise their decision accordingly."

Masi said the drivers understood where the practice start zone was.

"The practice start location is obviously very circuit specific, and detailed in the event notes. So at every other event Lewis along with all the other drivers has complied with the requirements of where they perform a practice start in accordance with the race director instructions.

"I would say that the reason why we determine where the practice start location is for the safety of all drivers. Everybody is aware of what is actually happening. So we determine its location for a deliberate reason.

"I suggest that there was probably a miscommunication between the team and the driver of car 44. Because obviously, Valtteri [Bottas] and all the other drivers used the exact practice start location where it was, immediately on the right after the pit exit lines.

"Generally, we actually don't paint a box, we just specify the location and have done even before my time, from my understanding. It's very much a circuit specific element of where it is. I think today was just a simple error from that perspective."

Although the penalty points were rescinded, Masi stressed that it was still regarded as an offence that had gained Hamilton an advantage.

"I think you need to have a look at everything on its own merits, and in the stewards' view, performing that practice start in that area was a sporting advantage. And therefore, they thought an appropriate penalty was a sporting penalty.

"The spectrum is wide from a penalty area, and the stewards obviously have the ability to apply any of the penalties in the sporting regulations and in the international sporting code.

"So that's why we have the stewards and the penalties are for them to determine what is most appropriate in the circumstances.

"There was a breach of two elements of the regulations that were highlighted, one being the article within the race director's event notes.

"The second being article 36.1 of the sporting regulations, which states that you must keep a constant speed through the pit exit road, the pit exit road being defined from where the lights are at pit exit, through to the safety car line."