Motorsport.com takes a look at the complex layout of the power unit that ended Honda's Formula 1 win drought in 2019.

The development of the Honda F1 power unit has been a key talking point of the 2019 season, as the marque has enjoyed a successful year with Red Bull.

Having enjoyed three victories this season - Austria’s win being the first since 2006 for the Japanese manufacturer - Honda has also pursued an aggressive upgrade strategy.

But the way that Red Bull has laid out the power unit inside its RB15 in an arrangement to improve the aerodynamics.

The image below details Red Bull’s layout of Honda’s powertrain. 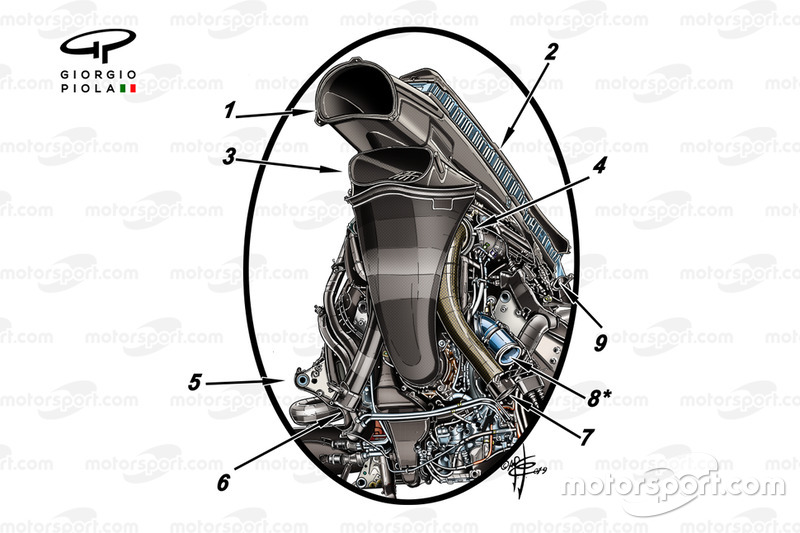 Throughout the years, the overhead air inlet has been used purely for the engine intake system, but Honda has allowed for the provision to also use that inlet (1) for radiator cooling.

By nestling part of the radiator system (2) above the engine, the team can make the sidepods - where the radiators are usually housed - a lot smaller.

But the inlet is still also used to bring air into the compressor (3), which is driven by the turbine, before it passes through the engine intake system.

Points (4), (6) and (7) denote further intakes, which is redirected through the sidepods of the car.

As the internal combustion engine is used as a stressed member of the chassis, it features highly-robust mounting points, as denoted by (5).

Toro Rosso has a slightly different intake system, and while it also features an ‘overhead’ radiator in the car above the engine, the inlet is split into three distinct parts to feed the compressor and cooling.