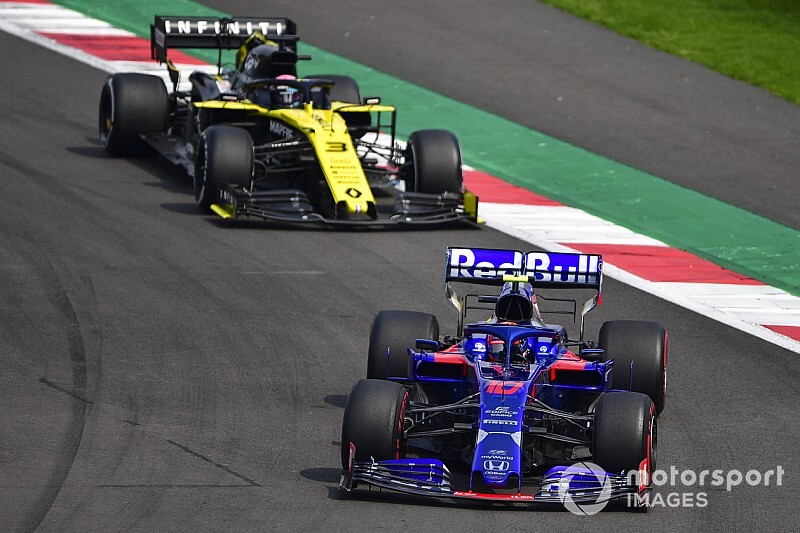 Daniel Ricciardo says he relishes the fact that Toro Rosso is now a serious threat to Renault in the constructors' championship ahead of the Formula 1 season finale in Abu Dhabi.

Pierre Gasly's shock podium finish at the Brazilian Grand Prix has helped Toro Rosso to close to within eight points of Renault in the team standings with one race left to go.

And while it means Renault will face some added stress at the end of the campaign not to lose the spot and drop to sixth in the table, Ricciardo thinks it is ultimately a good thing that his team has something to fight for at the Yas Marina circuit.

"Game on," said Ricciardo when asked by Motorsport.com about the fight with Toro Rosso.

"I mean, obviously I'd love for it to be us than them [scoring a lot of points], but I like that it keeps pressure on us for the last race.

"It won't allow us to rest and gives us really something to fight for in Abu Dhabi. It's a track I really enjoy, I've always gone well there. So yes, ready to go."

Ricciardo is hopeful that the Abu Dhabi circuit will suit the Renault car and help make his team's task much easier.

"When I'm looking at the team's results last year, it's very similar to this," he said. "A lot of the circuits that I struggled on we seem to probably struggle as well on last year.

"In Abu Dhabi, I know Carlos had a mega race last year, so I'll take that and we'll go there with some positives."

"You never know what happens," he said. "Therefore be careful. We are only eight points behind Renault, which means also this [fifth place] is still possible. But we have to be clever.

"We have to set up the car in a correct way. Abu Dhabi is another track and hopefully we are competitive there as well."